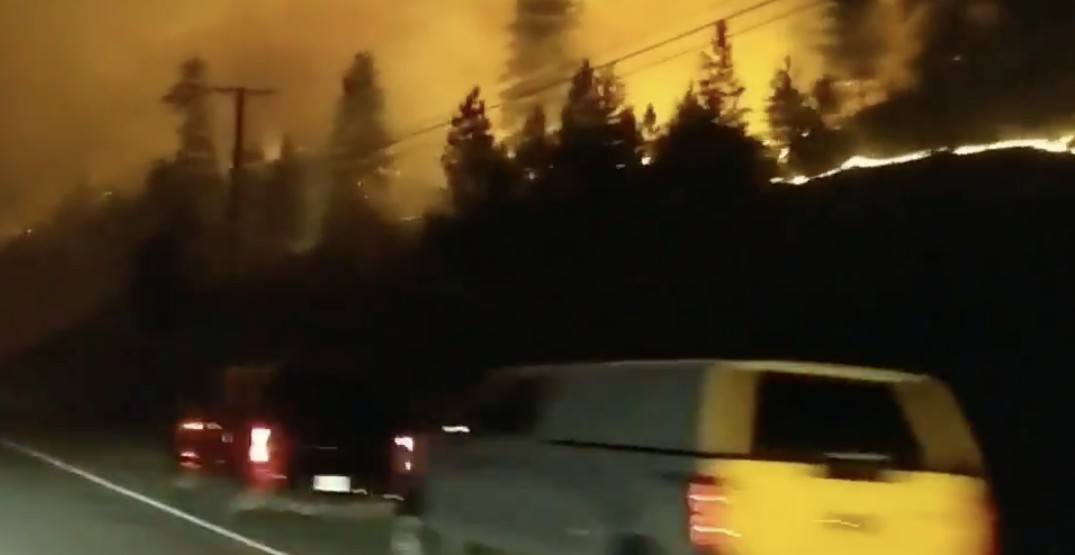 As wildfires continue to burn in the Okanagan Valley, one Victoria resident’s video shows just how quickly the fires are spreading towards drivers on the highway.

Jenna Elyse posted video footage of the blaze on July 19, as she was driving near the Mount Eneas fire, which was encroaching very close to Highway 97.

Driving through the #mounteneasfire last night was pretty scary, thankful to all of the emergency personnel who escorted us safely through the fire zone #peachland #BCWildfire pic.twitter.com/0e1bQbwewz

Elyse told Daily Hive that she was visiting family in Westbank when she was alerted by friends that the fire was getting worse, so she and her boyfriend decided to drive to Penticton.

“We were stopped on the highway in Peachland for four hours as the RCMP was escorting 30 cars at a time alternating each way,” Elyse said.

She described the trip as “extremely scary,” because they were driving close to a steep slope with flaming trees.

“With the wind it was so unpredictable, not knowing if we’d be able to make it through or have to turn around.”

Highway 97 was closed in both directions between Peachland and Summerland early Friday morning due to dynamic wildfire behaviour.

According to Drive BC, the highway has now reopened to single lane alternating traffic with an RCMP escort in both directions between Peachland and Summerland.

UPDATE – #BCHwy97 **OPEN** to single lane alternating traffic, with RCMP escort, in both directions between #Peachland and #Summerland due to dynamic #BCWildfire behaviour.
Consider the alternate routes: #BCHwy33 & #BCHwy3 or #BCHwy5A & #BCHwy3.https://t.co/6DviEGDetW pic.twitter.com/VxvP9PjLu8

A local state of emergency has been declared for multiple areas within the Okanagan Valley.

According to Central Okanagan Emergency Operations, gusting winds increased the size and threat of the wildfires. Several evacuations alerts were issued across the area throughout the region.

Over 1,500 residents across approximately 857 properties were displaced, with the latest evacuation orders coming at 11:50 pm and 12:50 am, last night.

An emergency support services reception centre has been set up at the Lakeview Heights Baptist Church in West Kelowna to help affected residents.