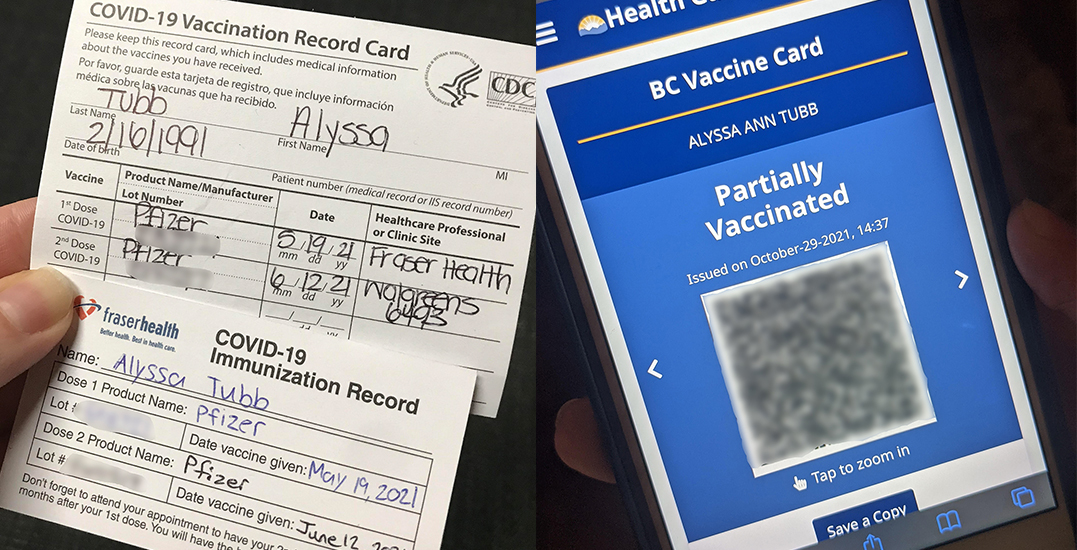 A woman in Metro Vancouver is feeling frustrated and left behind after a critical error was made on her BC Vaccine Card.

In late October, the second phase of the BC Vaccine Card took effect, meaning that individuals would have to be fully vaccinated in order to enter restaurants, bars, movies, and other public indoor gatherings.

Alyssa Tubb has two doses of a COVID-19 vaccine, but her vaccine passport has been incorrect since she first downloaded it — as of earlier this week, it still shows her as being partially vaccinated.

Tubb tells Daily Hive that she got her first dose in May. Shortly after, however, she had a family member in the United States pass away.

Initially, she didn’t want to travel because she wasn’t fully vaccinated. But her parents suggested that she travel and receive her second dose when she arrived in the US so that she could attend the funeral.

Tubb would end up travelling to Lake St. Louis, Missouri, and receiving her second dose of the COVID-19 vaccine on June 12, just weeks after her first dose in May. 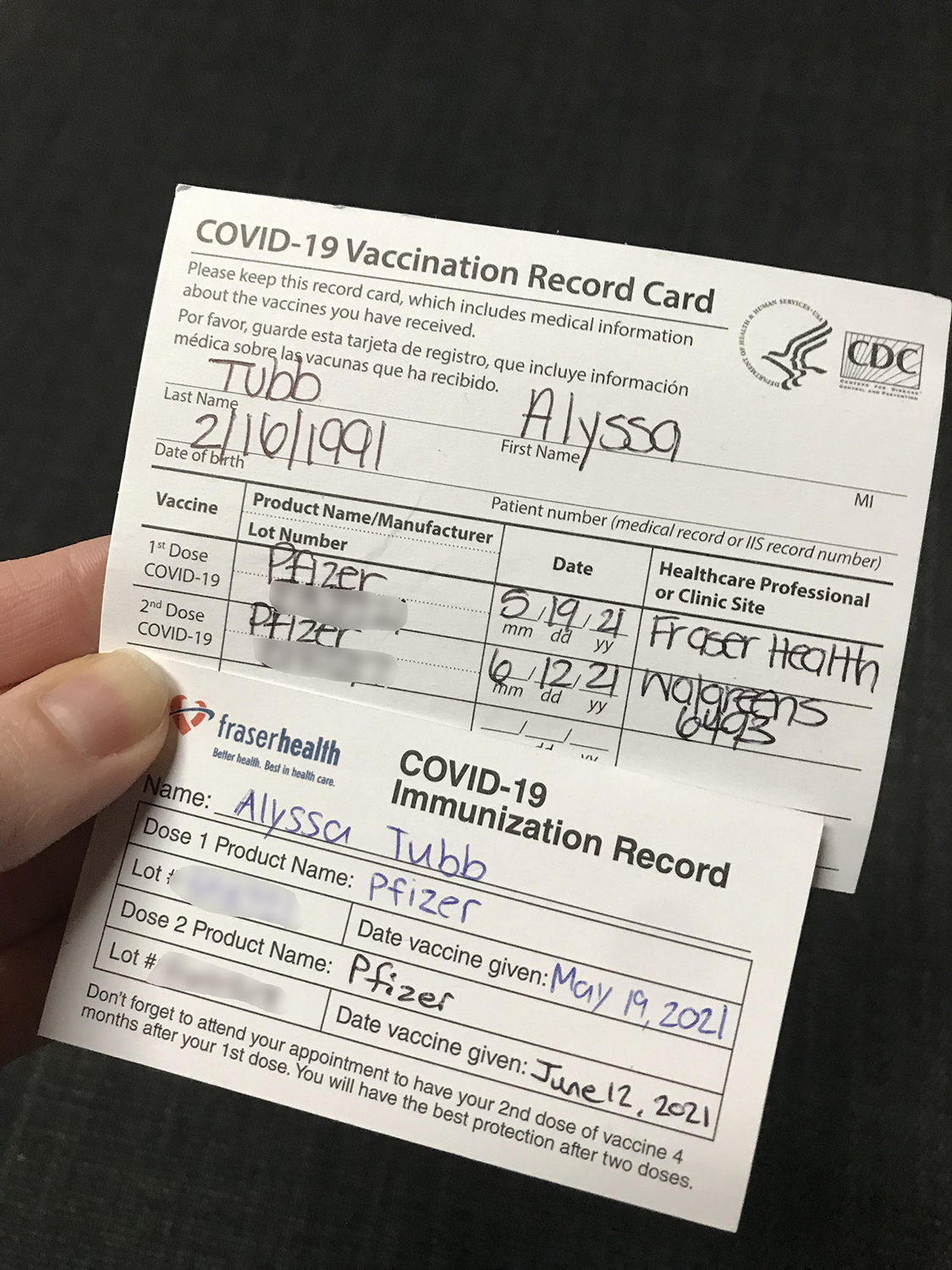 Upon returning to Canada in early August, Tubb says that she immediately reached out to see how she could have her second dose added to the provincial immunization registry. She was given a link to submit her proof of vaccination but says that she was already getting mixed answers — one portal told her that it would take five to seven days to have her second dose added, while another said it would take 12 to 14.

“At that point in time, the vaccine passport was being dreamed of — it didn’t exist yet,” Tubb says in an interview. “So I was really just hoping to update it since they were continually calling me and offering me another dose. But I wanted somebody else to be able to have that and have it move down the list.”

When plans for the BC Vaccine Card were announced in late August, however, panic began to sink in.

“I was like ‘uh oh, I’m glad I updated that information,'” Tubb says. “The first time I looked at [my vaccine card], it said partially vaccinated because it only included the first dose I got in Canada.”

“I was watching it like a hawk. I called in as a month went by and then six weeks and eight weeks.”

And when October 24 rolled around, marking the second phase of the BC Vaccine Card, Tubb’s passport still showed that she was partially vaccinated. 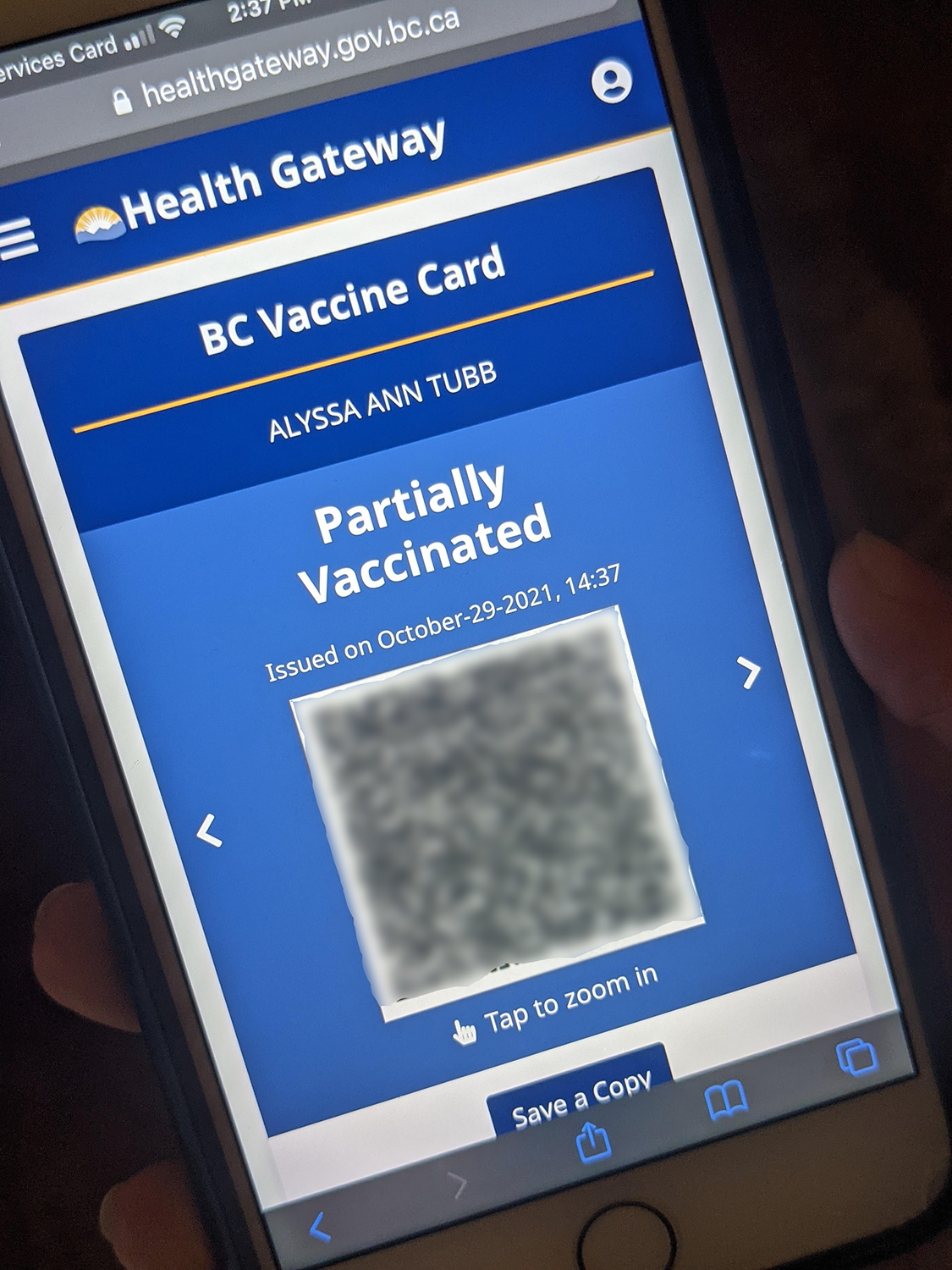 She says that she continued to reach out to the provincial immunization registry, which had initially promised that her information would be updated by October 24.

“I called back in and they changed the story a little bit where they said ‘yes, we’re really behind but we’re updating things in priority order,'” Tubbs explains. “I kind of hit a brick wall there and they said that someone would call me back in a few days.”

After several days passed, Tubb also reached out to her MLA, who is also trying to look into the matter.

“I saw it coming, requested assistance to prevent the issue, and now am being told to just wait patiently for a nameless, faceless organization to ‘call me back in a few days,'” she wrote in a letter to her MLA.

As of Tuesday afternoon, her BC Vaccine Card still shows her as being partially vaccinated. Tubb says that the error has caused remarkable frustration, barring her ability to join in on recreational activities with her friends and family.

“My husband’s birthday is coming up and we’re new parents, we have an 11-month-old,” she explains. “All he wants to do is see the new Bond movie and have the night off, and we can’t do that.”

“There have been several times when my friends have been like ‘hey do you want to meet us at the brewery nearby.'”

The error in her vaccine card has also complicated developmental classes with her young daughter.

“The local rec centre has ‘mommy and baby’ music classes and ‘mommy and baby’ fitness classes,” Tubb explains. “But a requirement is that you’re fully vaccinated and that you show the vaccine passport. So this is actually preventing me from taking my daughter to developmental baby classes.”

In early September, she and her family also made plans to travel to visit family in the US in mid-November. The complication with her vaccine passport also leaves travel plans up in the air.

She says that she’s heard from other individuals in BC who are dealing with similar issues in their BC Vaccine Card. She also says she’s immensely frustrated with the lack of response in general.

“Lots of people that I’ve talked to this about have offered solutions and are not really addressing the spirit of the problem, so to speak. There have been people that are like ‘oh, they’re going to give third doses anyways’ or ‘why don’t you get another shot.'”

Daily Hive reached out to the Ministry of Health, which stressed that this has been “the largest immunization effort in BC’s history.”

“While these incidents are not common, the provincial team is creating incident tickets for individuals who have experienced vaccine record complications for follow-up to resolve these issues as quickly as possible,” a spokesperson from the Ministry tells Daily Hive.

According to the Ministry, submitting information to the immunization registry takes less than five minutes and “every effort” is made to have a person’s vaccine record updated within four to seven days.