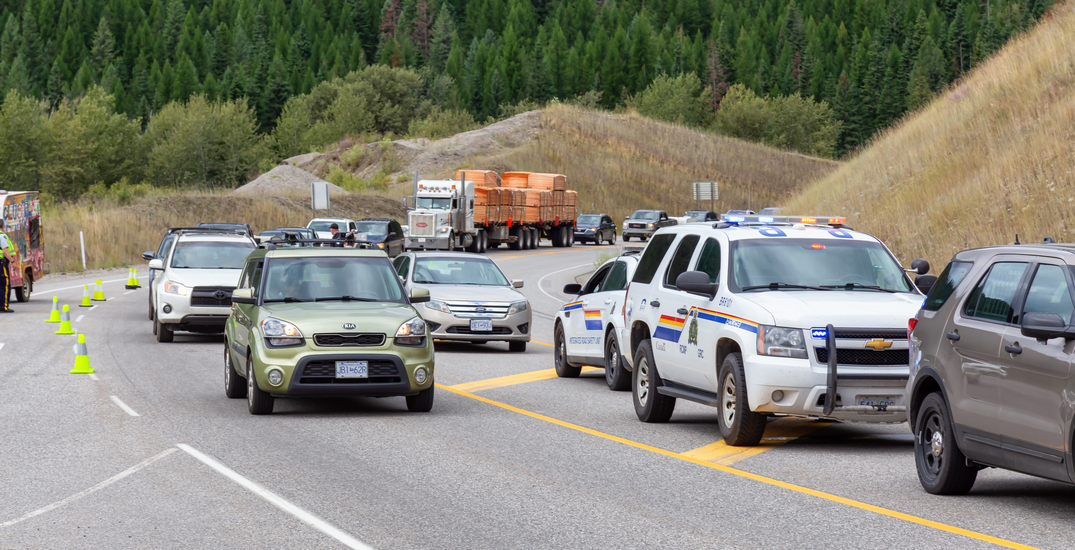 A police roadblock set up in Salmo, British Columbia in 2019 (Shutterstock)

The provincial government has provided further details on its new travel restrictions, specifically, how the police roadside checks will work.

The announcement was made on Friday morning by Minister of Public Safety and Solicitor General Mike Farnworth and follows last week’s implementation of new orders restricting non-essential travel.

Some details, such as regional zones, camping and ferry bookings, and the guidelines around essential travel, were explained last week. Little information, however, was shared about the “periodic roadside checks” that police would be setting up across the province.

Farnworth explains that these “counterattack-style” road checks can be set up on highway corridors that connect different regional zones. He stresses that you won’t see them, however, in areas such as downtown Vancouver or Boundary Road.

If a driver is stopped at a roadside check, police will be able to ask for the driver’s name, address, and driver’s licence, any available documentation regarding their name or address, such as secondary identification that would confirm the driver’s residential address if they’ve recently moved.

Police will also be able to ask the purpose of the driver’s travel, although documentation will not be required. Passengers in the vehicle won’t need to provide any information.

“Police cannot engage in arbitrary vehicle or street checks,” reads a statement from the provincial government. “If police have reasonable grounds to believe that a person has travelled for a non-essential purpose, they can direct the traveller to turn around and leave the region.”

Police will be able to issue a $230 fine for not complying with the requirements of a road check and a $575 fine for violating the travel order.

Farnworth also says that he recognizes the concern that these measures have raised among British Columbians.

“I know that there have been concerns raised about police being given broad sweeping powers and the impacts this could have on many British Columbians. Particularly the potential to disproportionately impact Black, Indigenous, and racialized and vulnerable communities.”

He stresses that police will not have the authority to stop pedestrians on public streets or to conduct arbitrary inspections or investigations. Additionally, police won’t be permitted to record information unless a driver is found in violation of an order.