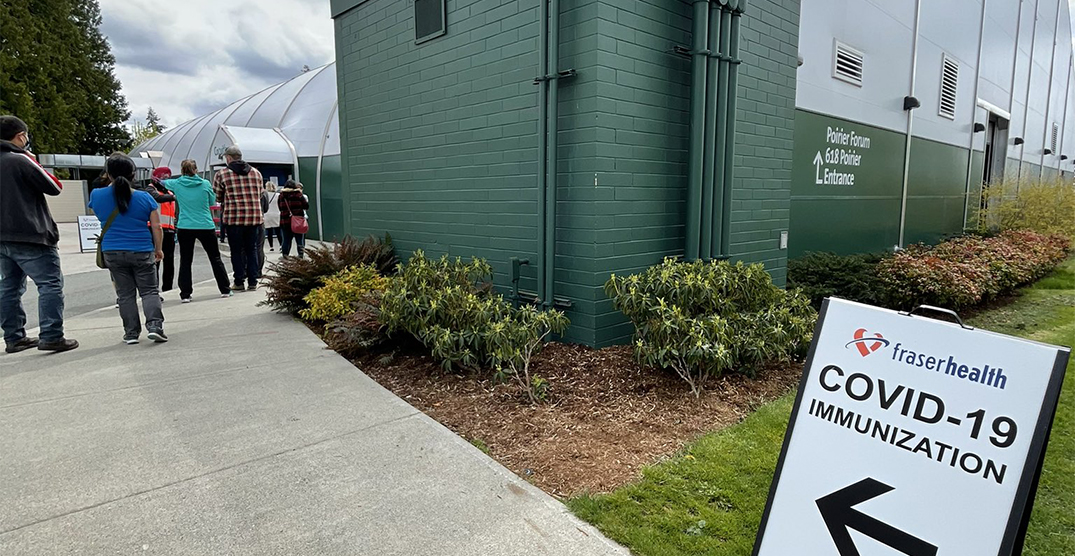 Health officials in British Columbia addressed the confusion and frustration that many people felt following the pop-up COVID-19 vaccination clinics that opened in Fraser Health and Vancouver Coastal Health this week.

The first of these clinics appeared to open on Tuesday afternoon in high-transmission neighbourhoods in Surrey and Coquitlam. Health authorities shared announcements on social media moments after they had opened. In response, hundreds of people lined up, many for several hours, for a chance at receiving a dose of the vaccine.

The clinics created a number of issues. Some people who reportedly attended said that they were turned away after several hours of waiting, despite being promised that they would receive a shot.

It was also reported that BC residents living outside of these high-transmission neighbourhoods attempted to get a dose of the vaccine.

Then, there was an issue of age. Some of these clinics offered AstraZeneca vaccination to those above the age of 30. But Fraser Health confirmed during a media availability that some individuals under the age of 30 received vaccination as well.

Provincial Health Officer Dr. Bonnie Henry said that health officials were “concerned” with how these clinics rolled out, stressing that they “were done with the right intentions.”

“It got a life of its own,” she said during a press conference on Tuesday. “That was not anticipated, in social media, in particular.”

She asked that British Columbians who don’t live in these high-risk neighbourhoods refrain from visiting these communities, adding that “everybody will get their turn.”

“There were some operational things that were done and were not done that caused a lot of frustration,” Henry said. “I can see that, and I absolutely apologize to people for the miscommunications and for the confusion. That was certainly not the intent.”

The Provincial Health Officer says that the intent of these clinics was to try and reach people in challenging communities, where there are “barriers or challenges in getting access or people who have not been registering.”

On Thursday afternoon, President and CEO of Fraser Health Authority Dr. Victoria Lee also addressed the pop-up clinics. During media availability, she said that over 6,000 people were immunized over the three days.

Of the 6,000, 3% were under the age of 30, Lee said. She also said that the intent of these clinics was to “supplement the provincial registration and immunization program.”

“At this time, we do not have any further pop-up clinics planned.”