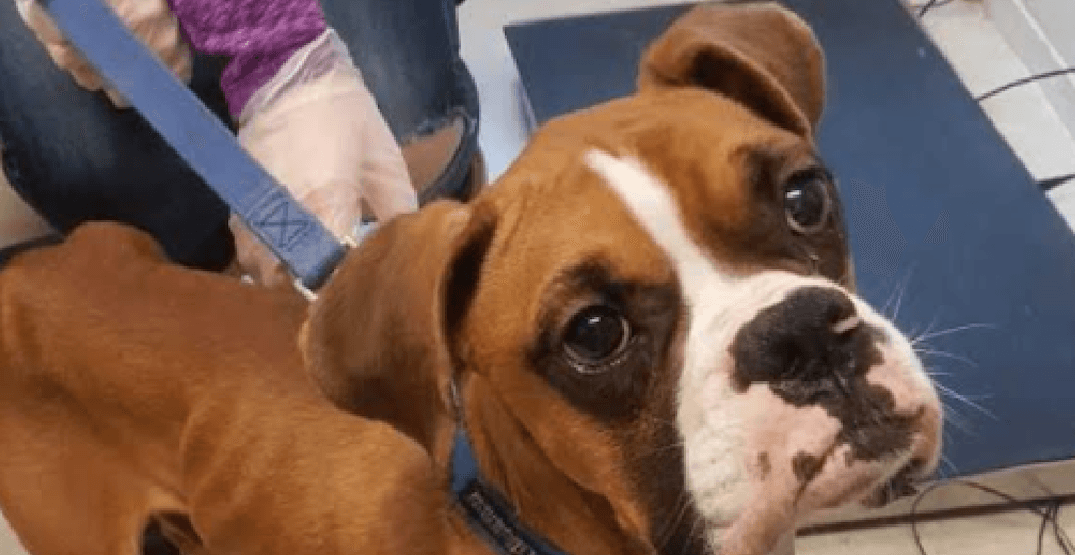 Tank the boxer at the BC SPCA in Vancouver (BC SPCA)

Tank is a two-and-a-half-year-old Boxer at the Vancouver branch of the BC SPCA, who shivers constantly, unable to keep himself warm because he’s so emaciated.

He came into the Vancouver branch “grossly underweight” and in poor health.

“Poor Tank weighs less than half of his ideal weight,” said SPCA Vancouver branch manager Jodi Dunlop. “He’s skin and bones – he struggles to get comfortable because he’s lying on his bones, which causes him pain.”

In addition, Tank has pressure sores and a foreign object lodged in his intestines, which Dunlop said will require surgery to remove.

The subject of an ongoing BC SPCA cruelty investigation, Tank’s medical care, treatment and recovery costs are expected to be $9,000. And as a non-profit organization that relies largely on public donations, the SPCA hopes others will find it in their hearts to help fund Tank’s recovery.

“It’s hard not to fall in love with this guy – despite everything he’s been through, he’s so affectionate and so eager to please,” said Dunlop.

She noted that once Tank has gained back some weight and fully recovered from his surgery, her will be put up for adoption.

“We just want him to have a second change at a happy, healthy life in a loving, forever home,” said Dunlop.

Anyone who is able to help Tank and other animals like him is encouraged to donate online to the SPCA, or in-person at the Vancouver office, located at 1205 East 7th Avenue.