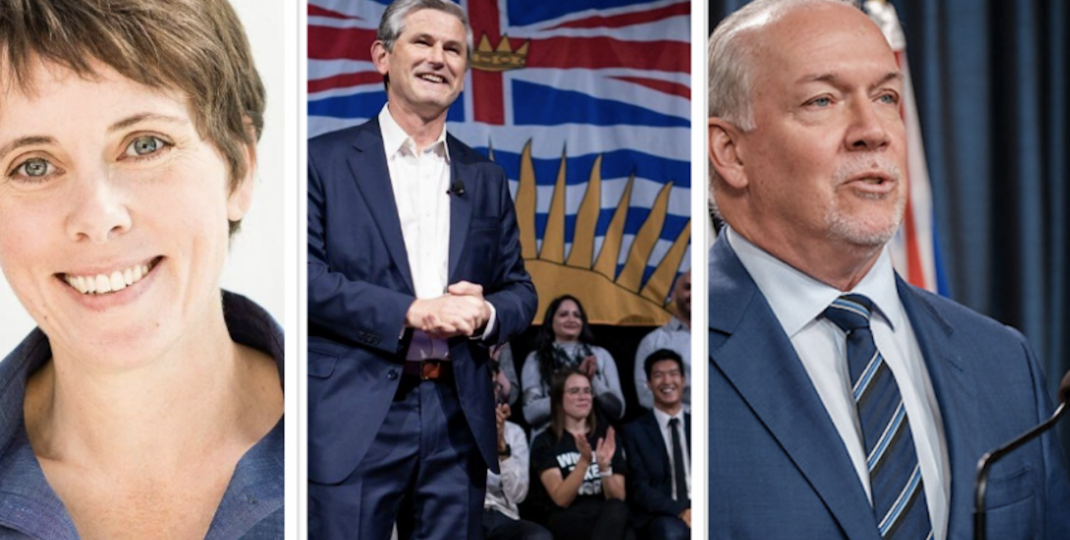 NDP Leader John Horgan’s decision to call an election during a pandemic and the BC Liberal promise to cut the provincial sales tax were the focus of attacks during a televised debate on Tuesday night.

The televised debate at the University of BC  featured the Green, Liberal and NDP party leaders keeping their distance because of the pandemic. They also dispensed with the usual handshakes in a largely civil debate, with some of the most pointed disagreements emerging on the best approach for economic recovery, energy policy and housing development.

The economy after the pandemic featured heavily in Liberal Leader Wilkinson’s attacks on Horgan as he accused the New Democrats of bringing in a $1.5 billion recovery plan that’s too late for many.

Wilkinson said other provinces had their plans in place in June and July, while Horgan “stalled” to bring in a plan for BC just before he called the election, a decision that has hit the tourism sector hard.

“You chose to leave them out in the breeze,” he said. “That’s not leadership, John, that’s self-interest.”

Horgan tried to tie COVID-19 outbreaks in long-term care homes during the pandemic to previous Liberal governments, arguing tax cuts almost 20 years ago led to 10,000 job losses in health care which caused understaffing in the facilities and “tragic” consequences for senior citizens today.

“The BC Liberals put a big hole in the budget by giving tax breaks to the wealthiest, firing 10,000 people,” he said in a question to Wilkinson, asking him if that was the right decision.

“It was the wrong thing to do. It focused on people who didn’t need help and punished those who did,” Horgan said.

“It certainly didn’t help seniors when the pandemic hit.”

The tone for much of the debate was civil, with few interruptions or raised voices. But when the leaders were permitted to debate freely, there were some testy exchanges between Horgan and Wilkinson on housing and the environment.

“You’ve got to get out of your neighbourhood and talk to people,” said Horgan after Wilkinson said the NDP housing strategy has seen rents increase across Metro Vancouver.

“CleanBC is a bit of a sham,” he said. “Your CleanBC plan is a giant hot air balloon.”

Horgan’s decision to launch an election was also called into question, but he said after he “grappled” with the decision to go to the polls a year before the next fixed-date election was scheduled he determined it was the right time.

“Our worlds have been turned upside down,” he said. “And I think the best course of action is to put the politics and the election behind us.”

Green Leader Sonia Furstenau separated herself from the other two parties on energy policy, criticizing them for subsidizing major projects like pipelines and delaying a switch to an economy based on clean energy.

Asked if pipelines like the Trans Mountain and Coastal GasLink are still necessary to support jobs, she said the province is running out of time to fight climate change.

“We have to invest now into the future that we want,” she said. “If we are propping up a dying fossil fuel industry with taxpayer money, what we’re going to get is more emergencies down the road.”

She said spending money to create a clean economy would also create jobs across the province.

Furstenau also put Wilkinson under pressure for his promise to eliminate the PST for a year, a promise that would cause provincial revenue to dip by $6.9 billion.

The Liberal promise would have consequences with cuts to services including for mental health and housing, she added.

But Wilkinson said the tax cut would “turbocharge” the economy by encouraging people to shop in the province.

The leaders were also asked to address the issue of racism by relating how they personally reckon their own privilege and unconscious bias as white leaders.

“This is a very important question for all of us to look into ourselves to answer,” said Wilkinson, adding his time spent as a doctor in BC  Indigenous communities helped show him all people are equals.

Horgan said growing up with Indigenous and multiracial friends he saw peoples struggles with issues of poverty and race.

“Regardless of who you are, people need to be included,” he said.

Furstenau said she cannot comprehend that some mothers tell their children to be wary of the police.

At a post-debate news conference, Horgan said “I think it was a good night for British Columbians,” and Wilkinson said he will let the people of BC decide who won the debate.