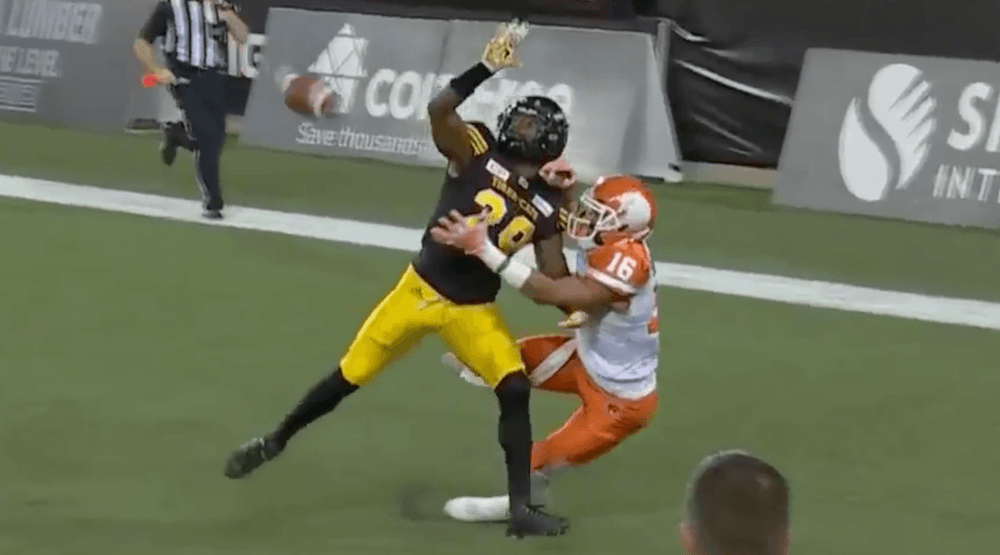 Did you see that?!

Quarterback Travis Lulay had a historic performance off the bench and Bryan Burnham made the catch of the year in the BC Lions’ 41-26 win over the Hamilton Tiger-Cats on Saturday night.

The Lions were able to overcome some early adversity, including two turnovers early on for their third straight win.

The win moves BC to 3-1 on the season after sweeping their three-game eastern road trip.

With the BC Lions leading 24-16 late in the third quarter, the human highlight reel, Bryan Burnham made the catch of the season.

With a defending player draped all over him, Burnham managed to make a one-handed grab while falling down.

The play was initially ruled incomplete, but was overturned after a challenge by head coach Wally Buono.

The reversed call gave BC a 31-16 lead, keeping the Lions in control the rest of the way.

As expected, current and former CFL players were all amazed by the acrobatic catch:

@RealBBurnham with the catch of the year 😱😱 #wow

@RealBBurnham that's a hell of a catch bra

The Lions could not have gotten off to a worse start in this game. On his first throw of the game, quarterback Jonathan Jennings took a big hit off the blitz, and his right shoulder — the one he throws with — appeared to hit the ground hard.

#TigerCats DB Richard Leonard records his second interception of the season on @JJ_Jennings10's first throw of the game. #CFLGameDay pic.twitter.com/6c8WCc2OLf

The play led to an interception and Hamilton scored a touchdown on the ensuing drive, putting BC down 7-0 early. To add insult to injury, Jennings was forced to leave the game with a bruised shoulder and didn’t return.

He wasn’t in a sling on the sidelines afterward, so hopefully it’s not as serious as originally thought. No word yet on if he’ll be ready for next week.

With Jennings out of the game early, the Lions appeared to be in tough.

No reason to watch this game anymore https://t.co/NK5QKjokXm

However, Lulay stepped up and showed that he has gas left in the tank.

The 33-year-old drove down the field and threw for a touchdown in his first series, then saved a Hamilton safety with a tackle off BC’s attempted two-point conversion.

He led the Lions to two touchdowns in just under a minute to end the first half — the former coming after an impressive nine-play, 95-yard drive. He had three 70+ yard drives on the night.

When it was all said and done Lulay finished 29-for-36 for 435 yards passing, a CFL record for most yards coming off the bench, and a personal best for him.

With his performance tonight, @TravisLulay has now thrown for more yards by a QB coming off the bench in #CFL History. Wow!#CFLGameDay

To put this performance into perspective, Lulay had 22 completions and 205 yards passing all of last season.

He did have two interceptions, but shook off that rust early and had a tremendous game. It’s nice to see that if Jennings situation doesn’t improve for the next game, the Lions will be in good hands with the veteran QB.

BC now turns their attention to the Winnipeg Blue Bombers next Friday at BC Place, their first home game in almost a month.