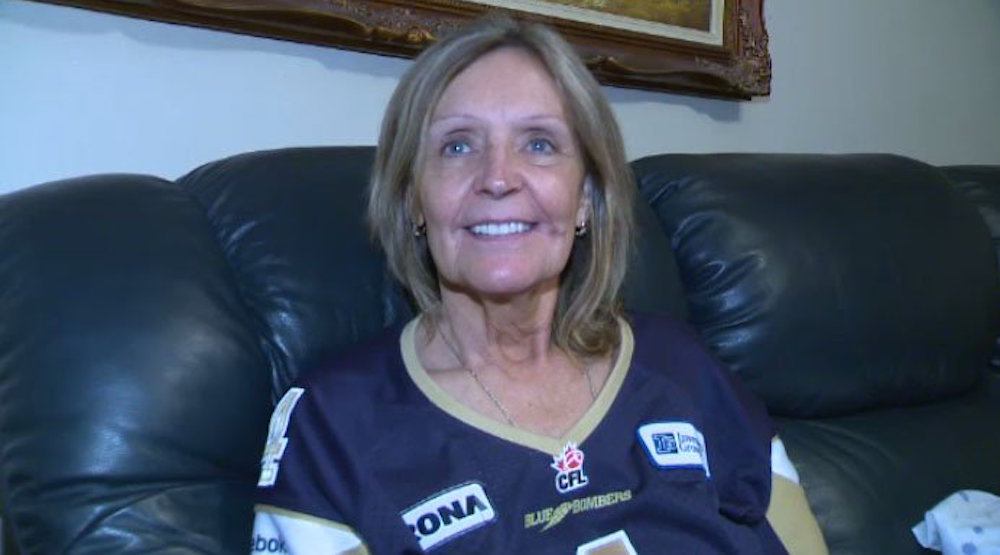 I know it, you know it, everyone knows it.

The CFL and Safeway/Sobeys know it too.

Kulbys, a Canadian Football League fan from Winnipeg, thought she was going to win a million dollars on Thursday. She was the Safeway ‘Touchdown to Win’ contestant, meaning she had an unlikely chance to win the million dollar grand prize.

In order to win, she needed two kickoffs to be returned for touchdowns in a game between the Toronto Argonauts and Winnipeg Blue Bombers.

Watching the game at home on TSN with her husband, Karen witnessed Bombers returner Ryan Lankford score a touchdown on the opening kickoff. That won her a $25,000 home theatre system from Visions Electronics.

In the second quarter, Toronto’s Martese Jackson ran back a kick 109 yards for the second kickoff return touchdown of the game. Except it was all for not. A phantom penalty to the Argonauts’ Llevi Noel negated the touchdown.

#WhatAboutKaren began trending on Twitter as Kulbys was approached by a number of media outlets to give her point of view.

And did she ever come across well.

Karen told Sportsnet’s Caroline Cameron that it was past her bedtime when reached on Thursday night, because she had to wake up at 4:30 am to work a job at A&W the next morning.

In speaking with TSN’s Darren Dutchyshen and Jennifer Hedger, Karen said she was going to give the money to her daughter so that she wouldn’t have to go back to work for a little while, allowing more time to look after her granddaughter.

She could use the money.

Instead, she’ll get a free trip to Ottawa, the opportunity to watch a lot of football games, and free groceries.

Karen is going to be compensated. Of course she is. It was obvious to everyone that the league and Safeway had to do something. It would have been a PR disaster to do nothing.

New CFL commissioner Randy Ambrosie reached out to Karen on Friday, offering a number of things to attempt to compensate her for losing a million dollars.

“We’re all fans and whatever team you root for, we would all love to see a CFL fan win a million dollars,” Ambrosie said through a CFL media release. “So we all feel for Karen and what she must have gone through last night, and what she must still be feeling today. I was in Winnipeg for the game and I spoke with her today.”

The commissioner has invited Karen and her family to come to Ottawa for the Grey Cup in November as their guests. The Winnipeg Blue Bombers are offering season tickets for the rest of this season and next year as well.

“We all know these things can’t compare to a million dollars but we wanted to do something to let her and her family know that we all wished she could have won last night.”

Safeway/Sobeys is bucking up as well.

The grocery store giant will provide Karen with free groceries for one year at any Safeway or Sobeys, it was announced.

While these are nice gestures, they don’t come remotely close to the million dollar prize Karen deserved.

“It was a very tough call made by our official last night, one that could have gone either way,” the commissioner added. “There are tough calls made all the time in our game because these are world class athletes, moving at tremendous speeds, and we ask our officials to make difficult judgement calls in the blink of an eye, and we have to respect their decisions.”

It was a tough call. It’s not unprecedented to have a call like that affect the final outcome of a CFL game. And indeed, if the shoe was on the other foot and a missed call resulted in a touchdown, Karen wouldn’t have given the money back. So in a roundabout way, I guess the result was fair.

But what about Karen?

A million dollars is a lot of money, even for the CFL. But could more not have been done?

And what about Safeway/Sobeys? They’ve received more press than they could have ever dreamed from this contest.

Why not make this into a media event? Draw more attention to this fan, and really make a splash?

It would have been great to see these companies get together, perhaps with the help of additional sponsors to find a way to give more to Karen. Grey Cup sponsors include huge companies like Shaw, Budweiser, CP, Nissan, TD, Pepsi, and Tim Hortons. Have a press conference. Make it a show.

Because a rough estimate of the total value takes a lot of the shine off this gesture.

If we assume the offer is extra generous, for six people, with the best seats at every football game, five nights at a nice hotel in Ottawa with food/entertainment included, and $300 worth of groceries per week, Daily Hive estimates the total value of the compensation (approximately $30,000) is less than 3% of a million dollars.

Karen is still a winner. She already won the home entertainment system, she’s going to get a great experience, and credit to her, she appears to have a great attitude about it all.

But, is it enough?