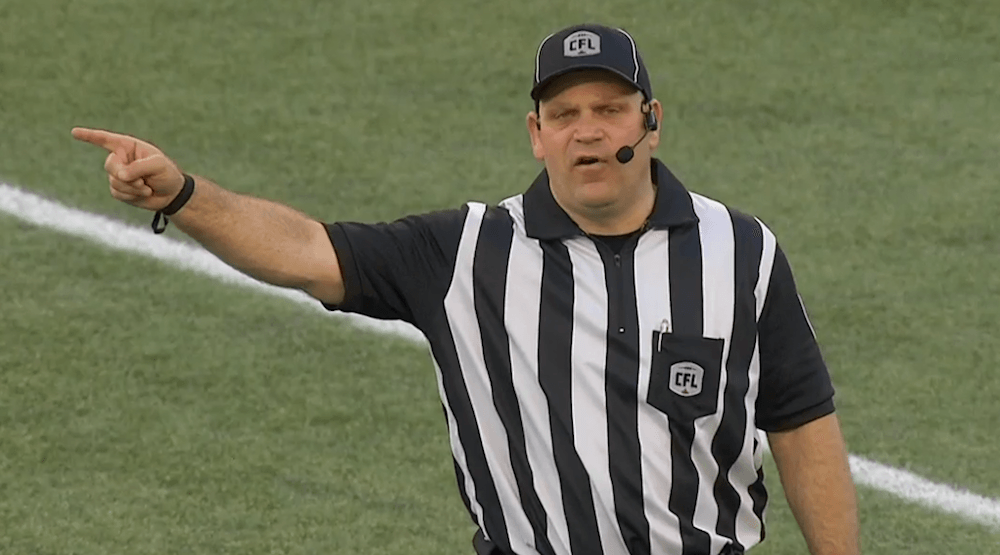 A Winnipeg woman was robbed of winning a million dollar prize during a CFL game on Thursday.

Karen Kuldys was Safeway’s ‘Touchdown to Win’ contestant during a game between the Toronto Argonauts and the Winnipeg Blue Bombers on TSN. 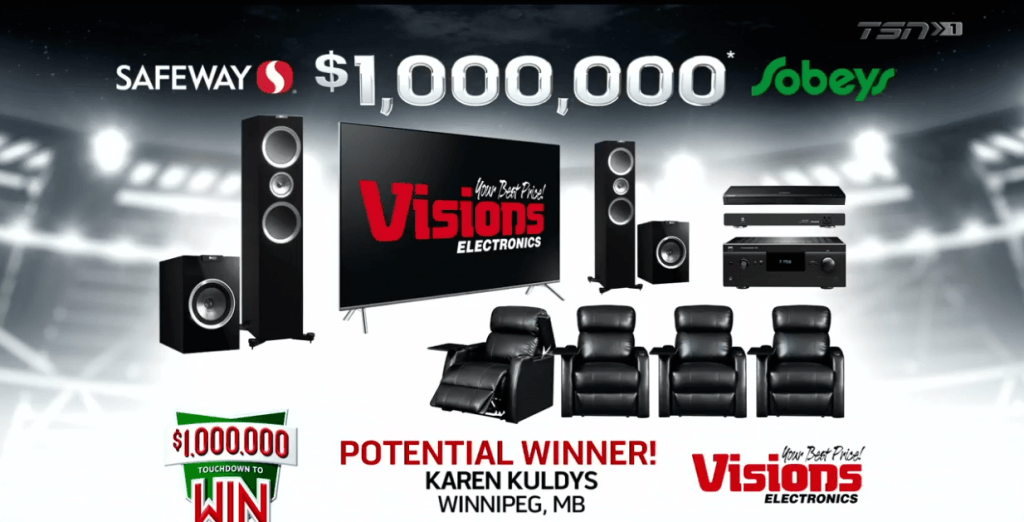 Should a player return a kickoff for a touchdown, Karen would win a $25,000 home theatre system.

It didn’t take long before she was winner. Ryan Lankford returned the opening kickoff 105 yards for the Winnipeg Blue Bombers, winning Karen the home theatre system.

Now for the big prize.

Should any player return another kickoff for a touchdown in the same game, Karen stood to win a million dollars.

So when Martese Jackson ran back a kickoff 109 yards for the Argos in the second quarter, Kuldys looked to have won $1 million.

As Jackson crossed the line, a penalty flag was thrown by an official.

The official called a penalty for an illegal block on Toronto’s Llevi Noel, despite the fact that there was hardly any contact, the Winnipeg player fell on his own, and it had no effect on the play.

Plain and simple, it was the wrong call.

TSN panelist Milt Stegall had the line of the night at halftime.

Winnipeg won the game 33-25, but a second touchdown on a kickoff was not credited, meaning Karen would not win the big prize.

The hashtag #WhatAboutKaren was trending on Twitter during the game as fans demanded justice for the Winnipeg woman.

I'm on the phone with Karen right now. She started by saying "I'm sick to my stomach. What a horrible call" More to come. #CFL

“My heart just sank and I thought — oh my god how close could I get to one million dollars,” Karen told the CBC’s Devin Heroux. “You got to be kidding me. My stomach is in knots just thinking about it right now.”

“That should have been a touchdown,” her husband added. “I need to get in touch with the CFL. The guy was eight yards behind the guy running into the end zone. And the Bomber guy fell on his own.”

Karen was also interviewed live on SportsCentre after the game by TSN’s Darren Dutchyshen and Jennifer Hedger. Karen, who is a Winnipeg Blue Bombers fan, handled it with class.

Still, you couldn’t help but feel heartbroken for Karen as she told TSN her first priority was going to be giving the money to her daughter so she could stay at home to look after her one-year-old granddaughter.

“That million dollars would have let my daughter stay home for another couple years, so she doesn’t have to go to work to leave her one-year-old,” said Karen, who added that she would help babysit.

Bad penalties happen all the time in sports. Athletes and fans have to deal with it and move on. But it doesn’t have to be that way for Karen.

Safeway and the CFL have a tremendous opportunity to right a wrong. They can turn an embarrassing story into a heartwarming one.

Find a way to give Karen a million dollars.