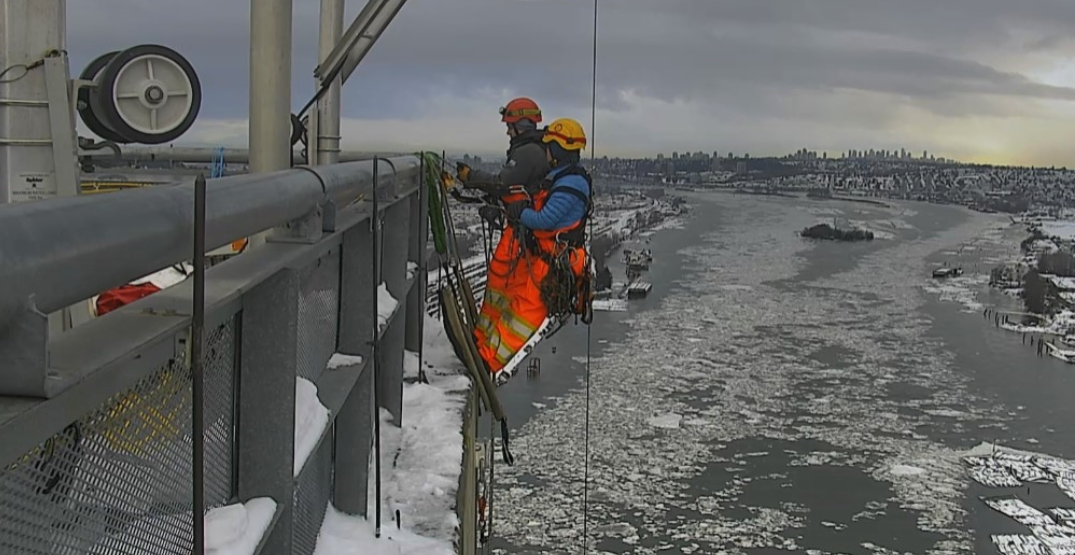 Workers on the Port Mann Bridge, with ice flows on the Fraser River below. (Ministry of Transportation / Twitter)

Yes, it’s been a winter-filled week in Metro Vancouver. Yes, there has been commuter chaos, transit issues, and delays and alerts across the region.

But there have also been some pretty unique sights created by the snow and icy conditions that we don’t often see here on the West Coast.

Take, for example this photo shared by BC Ministry of Transportation:

Workers on the Port Mann Bridge, with ice flows on the Fraser River below. (Ministry of Transportation / Twitter)

According to the Ministry, the workers were high up above the bridge “to reload the cable collar system.”

But beyond just the impressive height that the workers are working at was the view of the ice flows in the Fraser River below.

“How do you know it’s cold?” The Ministry quipped in its caption. “Look at the ice in the river.”

And while ice flows like these aren’t entirely uncommon on the river further up into the Fraser Valley and beyond during periods of colder weather, it’s somewhat more rare to see them this far down, close to the city and the mouth of the river.

Either way, the combination of the workers’ location and the flows on the river below made for one incredible capture.

As for whether or not flows like these will stick around for any length of time, Environment Canada said this afternoon that a Snowfall Warning it previously issued for the region has ended, and its forecast over the next few days shows temperatures well above zero. So it’s safe to say that sights like this will certainly be fleeting.