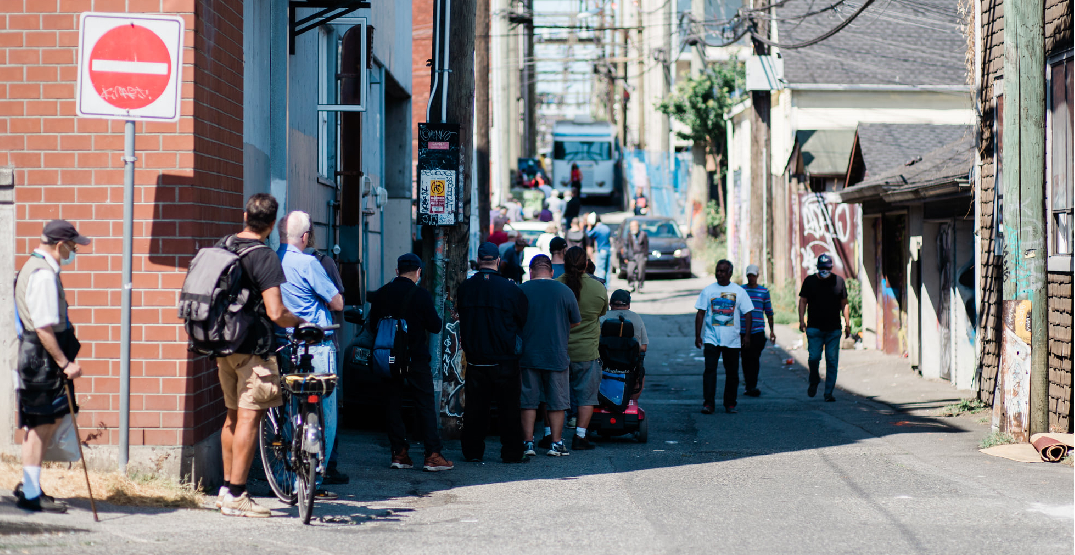 Staying cool will be vital for those more vulnerable in the province, especially as the expected rise in temperature poses a serious risk to people’s health.

According to The Weather Network, the humidex or “feels like” values are expected to rise to around 30ºC as early as Sunday, then pick up further between next Monday and BC Day before finally beginning to trickle down.

For groups like the Union Gospel Mission, communications manager Nicole Mucci tells Daily Hive that outreach groups are under more stress every year as the weather, housing, and toxic drug crises worsen.

“There are more issues at play when it comes to Metro Vancouver and BC. Last year, there was a really deadly trio where there was a lot of heat and a lot of humidity, and then there was a lot of wildfires that caused really poor air quality,” she explained. “While that isn’t expected yet … when you have multiple factors piling up on one another, and if you look at a community that is more marginalized, like folks who are experiencing homelessness and the fact that they often also have … lower immune system, it really is a very risky situation.”

Vancouver is forecasted to heat up significantly next week 🌡️

This is not good news for anyone in the city and will especially impact vulnerable members of our community. https://t.co/mhEe9R0poX

Mucci references research from UBC that found the risk of dying from extreme heat is higher in large urban centers because they were surrounded by concrete compared to rural areas with more green space.

“It can actually be like six to seven degrees hotter in some of those [urban] areas,” she says, adding these areas have little shade and the concrete ride areas absorb heat.

People living in marginalized communities who are experiencing homelessness, poverty, or have an addiction often have weaker immune systems, existing heart conditions, or unmedicated illnesses that could be worsened through the heat.

We are dealing with multiple overdoses and heat related issues today. Our OPS team are always helping in every way they can. pic.twitter.com/E2KC6WYtTm

Folks that cannot stay cool in the heat face risks like sunburn, dehydration, heat exhaustion (which can include headaches and vomiting), heat stroke and potentially death.

The extreme heatwave that hit the province last year was responsible for over 600 deaths in British Columbia.

Temperatures are predicted to feel like 37ºC as early as Tuesday, July 26, and that day is expected to be the worst of the week-long heat when even overnight temperatures will hover around 20ºC.

BC Day will be the last day of the relatively high heat before things start to cool down during the first week of August, according to the 14-day forecast.

While the temperatures expected in BC this weekend and early next week may lead to a heat warning, the province says “this is not an extreme heat emergency.”

However, Mucci says these cooling strategies are not widely accessible for some of the most vulnerable people across the province.

“As the temperatures swing more violently between like extreme hot and extreme cold, for individuals who are living in or a lot of poverty thresholds, energy insecurity becomes a very real thing,” she said. “What that means is that individuals who are in the margins of poverty don’t always have the financial means to be able to run eight air conditioning or have been going perpetually during extreme heat. And if they do choose to use cooling resources in their home then they might actually have to choose between being able to afford a meal or staying cool in the sweltering heat.”

Alert: Heat warnings may be coming this weekend or early next week 🌡️

Extreme heat is dangerous for everyone. But for people experiencing homelessness and other health conditions, they are at even higher risk of dehydration or heat stroke. https://t.co/37MPkvgNmp

The majority of the deaths were elderly or vulnerable people living alone in buildings without air conditioning, a report from the BC Coroners Service said. Of those people, 98% died indoors and most lived in socially or materially deprived conditions.

McVea added in her statement, “If you don’t have access to cooler space at home, find somewhere else in the community to spend time like shopping centres or libraries or with family and friends.”

British Columbians are also encouraged to check in on those who are at higher risk in person to assess their health and check the temperature of their homes.

“Seniors and persons with chronic conditions are at greater risk and may not realize that they are getting too hot. People with limited mobility may also need extra help to keep cool,” McVea said.

McVea also encourages everyone to drink lots of water, even if they do not feel thirsty, especially during warm nights and review signs of heat-related illness so they can identify problems early on and take action to cool themselves or someone else down.

UGM is preparing to help people as the heat worsens and will be handing out hats, sunscreen, sunglasses, compressed facecloths and water. The outreach team will also open its drop-in centre on hotter days.