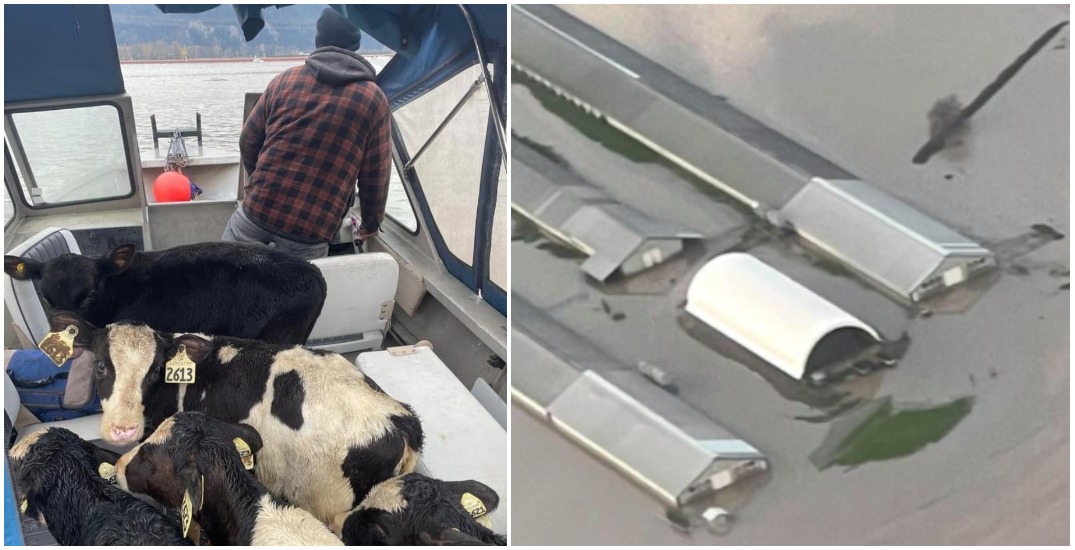 Cows being rescued by boat in Abbotsford / Brad Mueller / Aerial footage of farm flooding in Abbotsford, BC / Sophia Middleton

As critical minutes tick down to save animals stranded on flooded farms amid catastrophic weather in BC’s Fraser Valley, the province is focusing on getting emergency food and water provisions into affected properties before it’s too late.

While Minister of Agriculture Lana Popham says that thousands of animals have perished and drowned — with more that will need to be euthanized — industry insiders fear the number could grow much higher in coming days.

The province is currently working with BC dairy and poultry associations to assess and prioritize which farms are in need of the most dire assistance. Officials have secured helicopters and started aerial drops of containers and water, but there’s a grim realization aid may come too late to help.

“This has been another difficult day for agriculture in BC,” Lana Popham told reporters at a news conference on Thursday afternoon.

While trying to access dry feed was a problem just a day ago — many supplies on farms are under water — Popham said BC is confident it will be able to access reserves going forward.  One measure that will help is the diversion of feed destined for China at the Port of Vancouver going back to Abbotsford, where it is urgently needed.

One of the biggest issues for the farmers in Abbotsford’s Sumas Prairie is a lack of access to their properties by road. After being put under an emergency evacuation order earlier this week, there are “absolute concerns” from farmers that need to get to their farms, Popham says.  Some never left, intentionally defying the urgent orders from officials to leave immediately.

“Farmers would do anything to get to their animals, to get them food or water, or to put them out of their misery… We are doing everything we can,” Popham said.

The last few days have seen farmers and volunteers using everything from boats and Sea Doos to rescue stranded animals. Some physically swam through flood waters to get livestock to higher and drier ground.

A lot of cows that have been evacuated have been dropped to other farms that have not been hit by flooding, says the BC Dairy Association.

The historic flooding is a “very painful moment for farmers” who are cut off from their farms by road closures, Popham said, but urged people in the industry to respect the closure orders.

Earlier in the day, Abbotsford Police sent out an urgent plea today after its officers noticed people ignoring barriers on the roads and not following the directions of authorities.

There are also growing concerns over water levels re-rising in the eastern part of the Sumas Prairie. Mayor Henry Braun said some farms that were dry yesterday now have six inches of water above their roads. 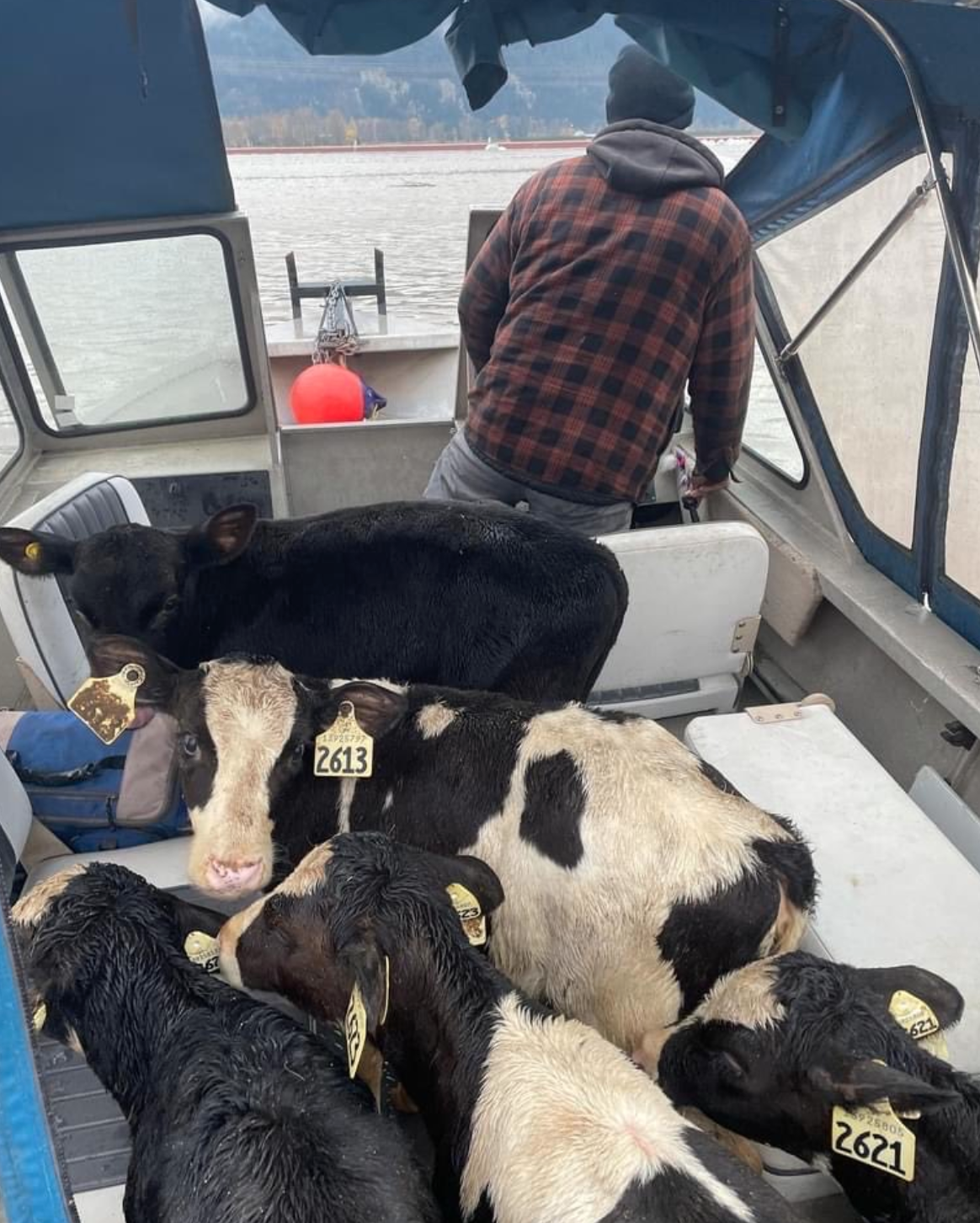 Cows being rescued by boat in Abbotsford / Brad Mueller

BC’s poultry producers are bracing for bad news and potential mass deaths as evacuated farmers are allowed to re-enter their properties to evaluate the impact.

There are 61 poultry farms that are currently in the impacted flood area, particularly the south valley area. These are farms that produce “meat chicken and turkey,” egg laying birds and hatching farms that would produce baby chicks.

The average size for a meat farm for chickens is around 50,000 birds, according to the BC Chicken Marketing Board.

Of those 61, there’s about 40 farms that are in the Sumas Prairie area that would be considered in the high risk zone, and are particularly hard to access, says Board Member Ray Nickel.

Nickel, a third generation farmer who has been in the poultry industry since 1991, says few people have an idea about the potentially huge impact to industrial farms when they are hearing the news about Abbotsford farms that have taken on water.

“People might be thinking about backyards chickens but that’s not the case,” he told Daily Hive. “There has obviously been some impact. We’re not sure yet what the extent of the impact is yet.”

A number of the board’s producers have double decker barns, he says, adding that if flood water breaches those structures and water gets into the first floor they would not “expect positive results.”

“There have been some very traumatic experiences where water levels have been breached those barns,” he told Daily Hive.

The board has been able to ensure all of its members have feed and water, and are working hard to get its members back onto properties.

Nickel says a lot of members stayed behind with their animals when the evacuation orders were issued. Although the industry told members to respect the order, he says there’s a “duty of care” that compelled many to stay behind.

“Farmers aren’t built that way — they are not going to leave,” Nickel said.

A BC Agriculture Minister spokesperson told Daily Hive by email that it is still too early to provide a tally of animal deaths.

“At this stage, we do not have any firm numbers on livestock injuries and losses,” a ministry spokesperson said in an email.