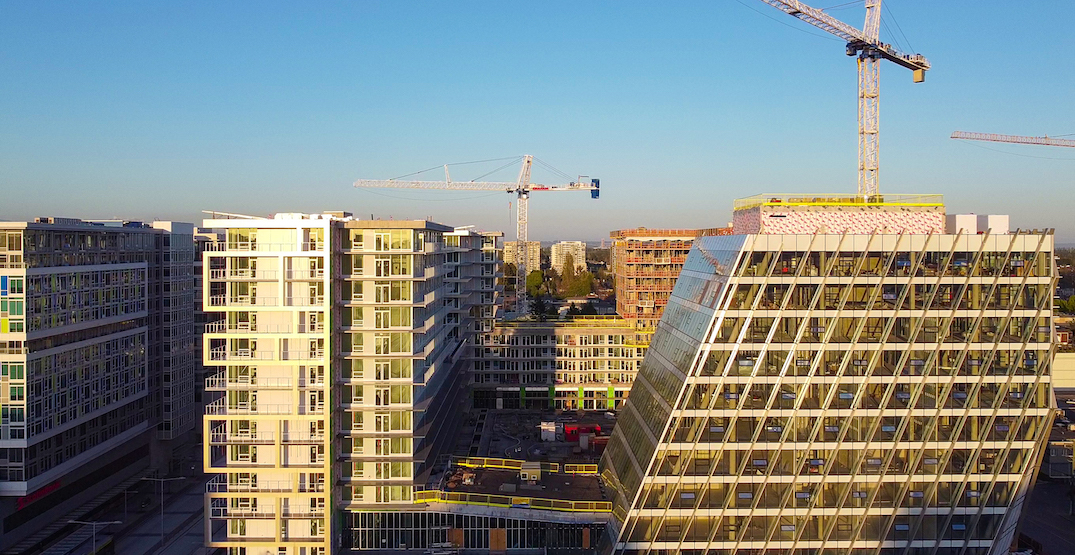 May 2021 construction progress of The Paramount in Richmond. (Keltic Development)

The process to review and approve rezoning applications for new buildings across British Columbia could potentially be accelerated, following a significant policy direction made by the provincial government.

Municipal governments would no longer be required by provincial legislation to conduct public hearings for rezoning applications, provided that the building proposals align with the city’s approved official community plan (OCP).

Under the provincial government’s public hearing changes for rezonings already compliant with OCPs, each municipal government would be required to provide public notice of the rezoning bylaw before the bylaw is considered at first reading for transparency reasons.

These changes are currently in a proposed bill, but they are expected to pass in the legislature, providing a great degree of clarity to the Local Government Act’s existing section of 464, which outlines the scenarios of when municipal governments can waive holding a public hearing.

“We are working with local governments, the development sector and housing advocates to streamline local development processes to help get more homes built faster for people,” said Josie Osborne, BC Minister of Municipal Affairs, in a statement.

“By updating public hearing and certain permit requirements, we are giving local governments more tools to deliver the housing that communities need throughout BC. This is one important step in the work all orders of government must do to meet housing needs for people in our communities.”

The public hearing stage with a city council is currently the final public consultation process within the rezoning process before a decision is made. They provide residents affected by the proposed land use changes and other interested individuals with the opportunity to directly inform elected municipal officials with their thoughts on the rezoning, which typically involves proposing a new building.

In urban centres, especially in Metro Vancouver, major rezoning applications generally seek more floor area density through added height, and could introduce a wide range of new uses, such as introducing residential to zoning previously deemed to be employment-only uses or establishing a new retail strip on the ground level of future multi-family buildings on a city block that is currently dominated by single-family homes.

By eliminating the public hearing requirement for a proposed change in zoning that already complies with OCP allowances in land use, density, and height, the provincial government sees this as a step towards reducing barriers and costly delays in improving housing affordability through increased housing supply.

OCPs and any amendments made to these community plans already undergo extensive public consultation, culminating with a public hearing of their own. In essence, a rezoning application necessitating a public hearing that already aligns with the OCP is deemed to be redundant, and undermines the overarching OCP process.

These changes were developed following the provincial government’s 2019 Development Approvals Process Review consultation process. As public hearings occur late in the review process, sometimes after years of planning and after significant costs to architects and consultants towards design, the changes mandated by a city council can be difficult to accommodate.

As well, the 2019 report suggested that public hearings may be an ineffective way for meaningful feedback.

“Public hearings tend to attract and empower well organized interest groups that may not represent the broad perspective of the community or even those who would be the most directly impacted by a decision. This can result in applications being denied despite being aligned with adopted community and neighbourhood plans,” reads the report.

“Public hearings can enable NIMBY (an acronym for ‘not in my backyard’) which describes residents’ opposition to a development in their own neighbourhood, while raising no objections to similar developments in other neighbourhoods.”

Similar concerns were raised in a separate 2020 report jointly commissioned by the federal and provincial governments on tackling housing affordability and supply in BC.

The provincial government stopped short of proposing measures that encourage municipalities to pre-zone areas following the creation of a new OCP or amendments to the OCP. Cities have generally shown a preference for spot rezonings to negotiate more public benefits from proponents.

Will these changes make a dent?

A significant proportion of rezoning applications are already triggered by the adoption of a new OCP or amendments to an existing OCP, and they follow the prescriptions of the community plan. For instance, OCPs have changed in cities like Burnaby, Coquitlam, and Richmond in response to new SkyTrain infrastructure and the heightened desire for transit-oriented development, and/or changes that reflect the city’s long-term aspirations for a municipal town centre. Occasionally, the rezoning application strives for greater density and varied uses beyond the OCP amendments that were previously made to consider SkyTrain. The latter of these example scenarios would still require a public hearing for its rezoning application.

Sometimes, OCP amendments and rezoning applications are paired together, when the rezoning is non-compliant with the existing OCP.

While public hearings would no longer be required for the OCP-compliant rezoning scenarios, it would still be up to municipal governments to voluntarily make a decision to not pursue a public hearing before arriving at its decision.

It essentially provides municipal governments with flexibility, but there have been instances of elected officials on the local level of government expressing a desire for a greater degree of public consultation, often for political reasons. Even with the changes, many municipalities may still continue to choose to hold a public hearing regardless.

Another major caveat deals with the jurisdictions the changes would apply to.

The legislated changes would be made under the Local Government Act, which affects how cities in BC are able to govern themselves, except for the province’s largest jurisdiction — the epicentre of the housing affordability issues. Under separate provincial legislation, the City of Vancouver is governed by the Vancouver Charter; only certain sections of the Local Government Act apply to Vancouver, where public hearings are often turbulent and fraught with uncertainty.

If similar changes in the approach were to also be applied to Vancouver, public hearings would not be held for the vast majority of rezoning applications seen to date within the Cambie Corridor Plan, West End Community Plan, Grandview-Woodland Plan, and Marpole Community Plan given that most proposals have complied with these district- and neighbourhood-specific OCPs. Much of the angst within the development community and amongst housing activists continues to deal with projects located within these community plans.

Vancouver is currently in the process of finalizing its Broadway Plan, with a detailed draft plan expected to be made available for public input next month.

New policy directions have been rolled out by the provincial government as part of its ongoing effort to review development review processes for municipal governments. Changes to public hearings is just one aspect of numerous recommendations made in the 2019 report.