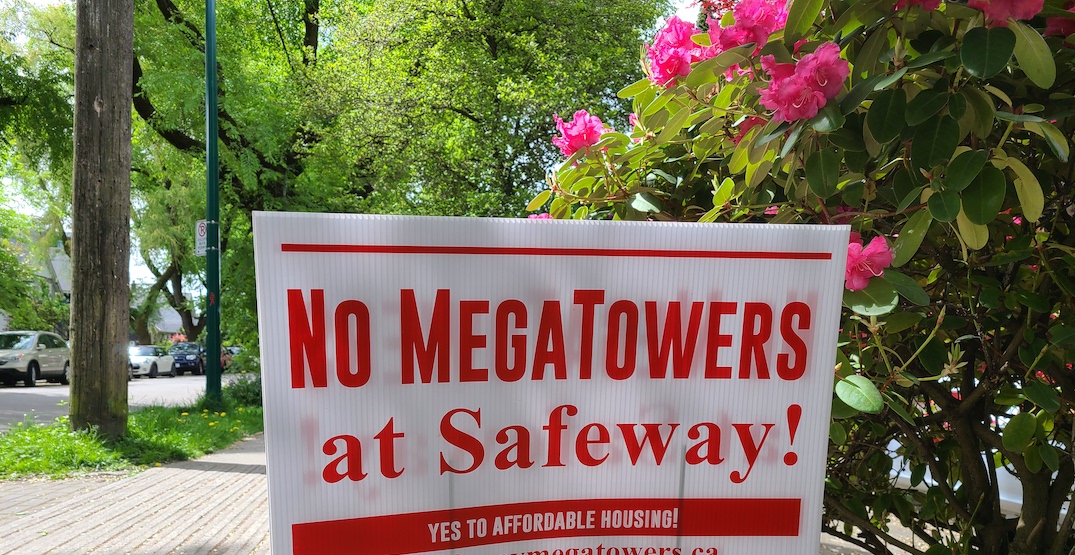 Over the past year, some residents in the Grandview-Woodland neighbourhood have placed "No Megatowers" signs on their lawns to show their opposition to the proposed redevelopment of Safeway next to Commercial-Broadway Station into three towers up to 30 storeys with 415 market rental homes and 235 condominiums, plus a new grocery store, retail, and restaurants. (Kenneth Chan/Daily Hive)

Community-based public opposition is a barrier to creating new housing supply, particularly more affordable housing, according to the findings of the federal and provincial government’s recent joint report on tackling housing affordability issues in British Columbia.

The extensive report tackled a wide range of issues, with much of the research focusing on how local and municipal governments inhibit housing affordability and supply, both inadvertently through conflicting policies or intentionally.

Amongst the issues is public opposition that can be classified as “Not In My Backyard,” also more simply known as NIMBY or NIIMBYism. The report states their concerns are typically rooted on concerns of gentrification, and the erosion of existing social ties, community, and a sense of belonging, as well as higher density would lead to increase noise, traffic, crime, and reduced property values.

The report specifically mentions vocal, well-organized neighbourhood groups as a barrier to new housing, even though they may not be fully representative of the general population.

“For instance, research has found that in Vancouver and Toronto, members of neighbour associations are more likely to be white, older, more educated, homeowners, who have lived in their homes for longer and hold different policy priorities than the general population.”

Homeowners are also more likely to oppose changes to their neighbourhood that add density, given that this group will not necessarily directly benefit from it.

While the democratic processes are important, the report continues, there is an overreliance on public hearings to make decisions on rezonings, neighbourhood and district plans, and official community plan amendments. Public hearings are said to “favour certain voices over others.”

“This can result in perceptions of majority opposition to new development, especially when the citizens most motivated and available to participate in the process generally oppose the development plans,” states the report.

“This opposition puts political pressure on the elected officials in charge of reviewing the proposals. Its influence strengthens further as those who support or stand to benefit from new housing supply often do not attend public hearings to voice their views and priorities.”

Such methods of public consultation conducted by municipal governments creates uncertainty for housing projects by greatly lengthening the timeline for review and adding to the proponent’s costs for architects, engineers, and consultants. Moreover, it allows “anti-development interests to apply disproportionate political pressure on decision makers.”

The report adds that NIMBY attitudes have also been expressed by renters who fear displacement or rent increases.

But if opponents to density were to have a long-term view, both renter and prospective homebuyers would eventually see an overall benefit from more housing supply.

Some of the concerns on displacement from density could be addressed by allowing higher densities in areas currently zoned exclusively for single-family homes. Such a change in approach would result in less redevelopment pressure in the relatively small number of areas where higher density is permitted.

The study’s authors recommend revamping how public consultation is performed to better ensure “more representative discussions on land use and the way our neighbourhoods evolve.”

This starts with their proposed idea of the provincial government leading a review of how municipal governments conduct public hearings, examining different formats than the current on site-by-site public hearings and city council approvals that “delay homebuilding and amplify the voices of groups opposing new housing at the expense of citywide objectives and affordability.”

The report’s panel was chaired by Joy MacPhail, a former longtime BC NDP minister and MLA for the Vancouver-Hastings riding, and former leader of the opposition. She is currently the chair of ICBC’s board of directors.

To develop its findings and recommendations, the panel consulted with academics, government bureaucrats and officials, non-profit organizations, and developers.