Artistic rendering of West Broadway transformed near Cambie Street, outside the Crossroads building. (City of Vancouver)

After much delay, there are now some details on the general direction of the Broadway Plan (BWP), which will determine the future development uses, urban design forms, transportation infrastructure, and public spaces of the Central Broadway Corridor in the Metro Core.

The Broadway Plan covers the general area framed by Arbutus Street to the west, 1st Avenue to the north, Clark Drive to the east, and 16th Avenue to the south, and it is the largest district and neighbourhood-sized planning exercise by the municipal government since the Cambie Corridor Plan.

Planning work began in 2018, when city council provided a $3-million budget for the exercise. A draft plan was originally scheduled to return to city council for decision last year, but this work was delayed due to the need for further consultation and COVID-19 impacts.

The latest round of online public consultation on the BWP, launched just today, builds on the previous public feedback received from residents and businesses on what they value and would like to see from the plan. The planning process is triggered by the Broadway Extension of the SkyTrain Millennium Line, reaching Arbutus Street in 2025.

Feedback received for this consultation will lead to further refinements for additional consultation in the middle of 2021, and a draft plan with complete details and prescribed policies — similar to the depth of other neighbourhood plans — will be sent to city council for consideration before the end of this year.

Map of the Broadway Plan study area and its sub-areas. Click on the map for an enlarged version. (City of Vancouver)

But it is suggested that any consideration for increased residential height and density must be tied with the renewal and expansion of secured market rental housing and affordable housing, including social housing and co-op housing.

There is an emphasis on protecting existing rental stock within the Central Broadway Corridor; the city estimates about a quarter of Vancouver’s total number of purpose-built rental homes are located within the BWP.

The intention is to retain and renew older rental properties incrementally over the long term.

For the lower density areas — such as Kitsilano North, Fairview, and Mount Pleasant North Apartment Area — only modest increases in height and density are contemplated.

For the Mount Pleasant North Apartment Area, which is generally the sub-area framed by Main Street to the west, Great Northern Way to the north, Clark Drive to the east, and Broadway to the south, the city has specifically noted the possible direction of exploring opportunities for non-profit and government acquisitions of existing purpose-built rental buildings to preserve affordability over the long term.

The Kingsgate Mall site, owned by the Vancouver School Board, would see affirmed support for increased height and density for a mixed-use development containing benefits such as affordable housing, public spaces, and other amenities.

A temporary moratorium on most types of market-based rezoning applications will remain in effect until the finalization of the BWP. This was put in place by the previous city council to prevent the level of speculation activity that was experienced during the Cambie Corridor Plan’s process.

Increased height and density for additional commercial space — such as offices and hotels — will be considered for the areas immediately around the new subway stations. A minimum job space component is also an emerging direction, such as the requirement for office levels above restaurant and retail levels. 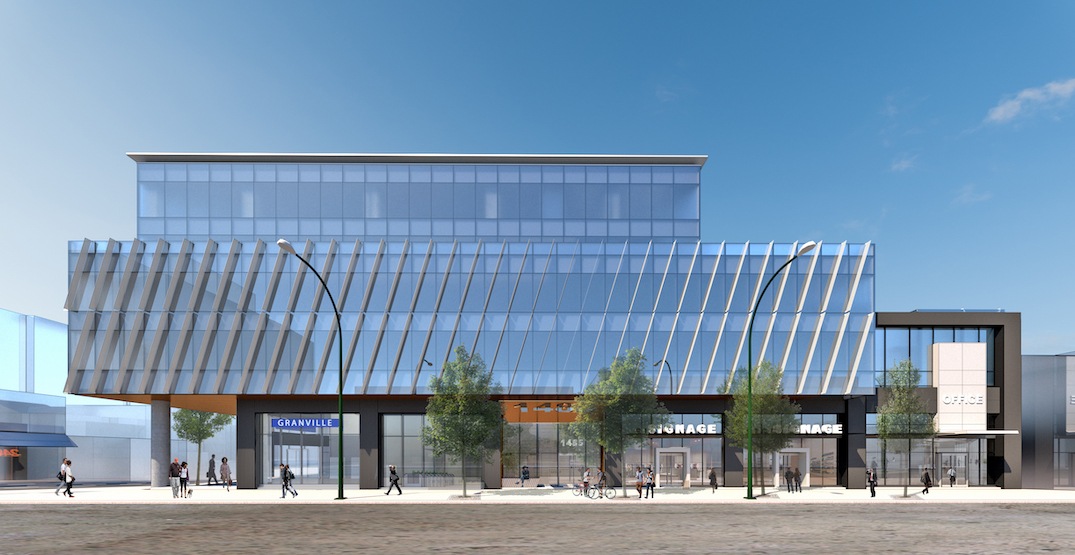 The Uptown/Cambie North commercial primary district of the general area from Oak Street to the west, Yukon Street to the east, as far north as West 2nd Avenue, and as far south as West 13th Avenue will be protected for commercial development by continuing the existing policy to restrict new residential developments. This will help meet both general employment space goals, and the future expansion of the Vancouver General Hospital (VGH) campus, BC Cancer Centre, and long-term institutional space needs related to research and healthcare.

The city’s recent Employment Lands and Economy Review identified the commercial development opportunities within the Central Broadway Corridor as a vital location to meet Vancouver’s overall long-term demand for office and hotel space, especially with the anticipated “build out” of the downtown peninsula.

Possible relaxation of dominating view cone, but potential for new ones too

City staff acknowledge the significant View Cone 3 emanating from Queen Elizabeth Park is a major inhibitor for a large stretch of the Central Broadway Corridor between Main Street and Oak Street.

View Cone 3 would specifically impact the aforementioned BWP direction of intensifying commercial and healthcare-related space between Broadway-City Hall Station and VGH-Oak Station. For this reason, city staff are suggesting to “review view cones, if necessary, where increased heights are being considered” within Uptown/Cambie North.

It is also noted by city staff that “medical office capacity is significantly constrained by the view cones and VGH helicopter flight path that crosses through the area.”

Height restrictions across the Broadway Plan due to mountain view cones and the flight path for Vancouver General Hospital helicopters. Click on the map for an enlarged version. (City of Vancouver)

The VGH campus and healthcare precinct are located on the western half of Uptown/Cambie North, and the helicopter flight path specifically impacts the northwesternmost corner of the area, just to the north of the hospital. This specifically limits the higher-density, transit-oriented development potential around Oak-VGH Station.

While some relaxations of View Cone 3 are possible, city staff have also suggested introducing new view cones, such as protecting street-end views of the downtown skyline and mountains.

City staff have excluded two view cones emanating from the area in and around Vancouver City Hall — View Cone 9.1 and View Cone 9.2 — from consideration for relaxation. This would restrict taller building forms for areas near Broadway-City Hall, which is set to become one of the region’s busiest transit hubs from the interchange of the Millennium Line and Canada Line.

Prior to COVID-19, the municipal government had budgeted $5 million for the planning and design work of an expansion and renewal of the Vancouver City Hall campus. Some of this planning work is now deferred due to the pandemic.

This particularly centres on the development of the city-owned block framed by Cambie Street to the west, Broadway to the north, Yukon Street to the east, and 10th Avenue to the south. This city block is the site of the existing Broadway-City Hall Station entrance, a large surface parking lot, and various low-storey commercial buildings along West Broadway, which will be entirely demolished over the coming months for the staging area required for subway construction.

November 2020 conceptual design of the Millennium Line at Broadway-City Hall Station. (Government of BC)

However, in the future, the city is proposing to turn this city block into an expansion of the City Hall campus, including a new city council chamber and new office space for city staff.

In the BWP’s emerging directions, this project is now named as “Civic Crossroads” and described as the “potential for an enhanced public service hub and include a variety of community uses.”

City staff are looking to retain the “human scale” village characters of these commercial strips by generally maintaining the permitted height and density, and consider limiting new residential development to support the viability of existing businesses. 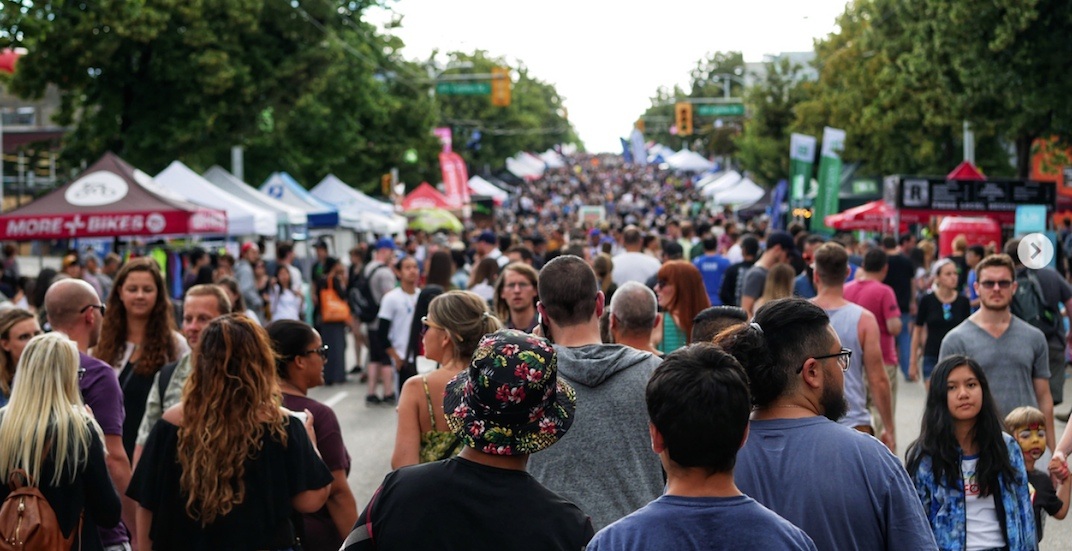 Crowds at the 2018 Khatsahlano on West 4th Avenue, Vancouver. (ethylspointofview/Instagram)

Centrepoint strip mall at the southwest corner of the intersection of Main Street and 13th Avenue, anchored by Save-On-Foods, would see support for increased height and density for mixed-use development, specifically for affordable housing, cultural facilities, and other public benefits. The building forms from a future redevelopment would have a lower height along Main Street to align with the broader village approach.

As required by regional policies, it will remain as an industrial area, and there would be an intensification in its light industrial uses, such as production, distribution, and repair. There would also be increased opportunities for the “innovation economy,” and arts and cultural spaces.

Additionally, consideration will be given to expand dining and service-related businesses — including the possibility of expanded lounge and patio spaces for breweries — to support the growing number of workers in the area.

Residential uses will continue to be banned from this area.

A major public realm component is key to the BWP, such as wider sidewalks, additional space for patios, and public plazas. The conversion of some side street areas to public plazas is noted as an example.

Aside from city-led investments, public realm upgrades will be tied to redevelopment — such as building setbacks for wider sidewalks — and the improvements that will be made to the immediate areas around the subway stations.

The conversion of Broadway into a “Great Street” will begin with the city blocks that will see subway construction, while other areas will see changes over the long term. With the subway replacing much of the bus services that currently run on the street, this strategy could include reducing the number of lanes on Broadway to accommodate wide sidewalks, parklets, restaurant patios, and a planted boulevard down the centre of the street.

Separate from the BWP, the City of Vancouver’s proposed mobility pricing scheme, such as road tolls, covers the Central Broadway Corridor and downtown peninsula. 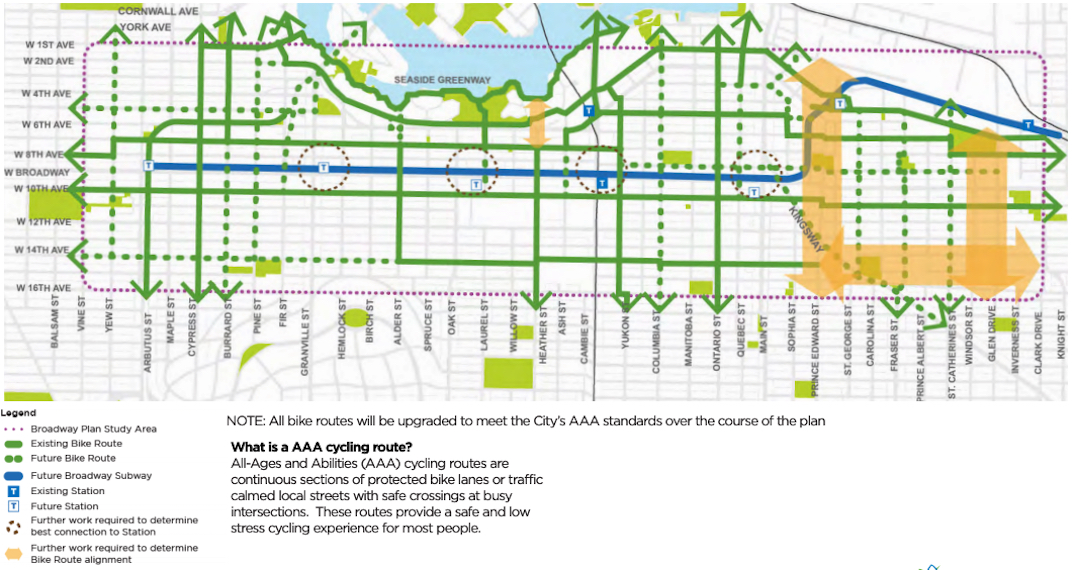 Future bike lane additions within the Broadway Plan. Click on the image for an enlarged version. (City of Vancouver)

The online survey for the Broadway Plan’s current round of public consultation will run through March 31, 2021.

The Broadway Plan supplements the ongoing work being done on the Vancouver Plan.

Earlier this month, the city also launched a public consultation on the future of 80 acres of city-owned property in False Creek South, immediately north of the BWP’s northern boundary.