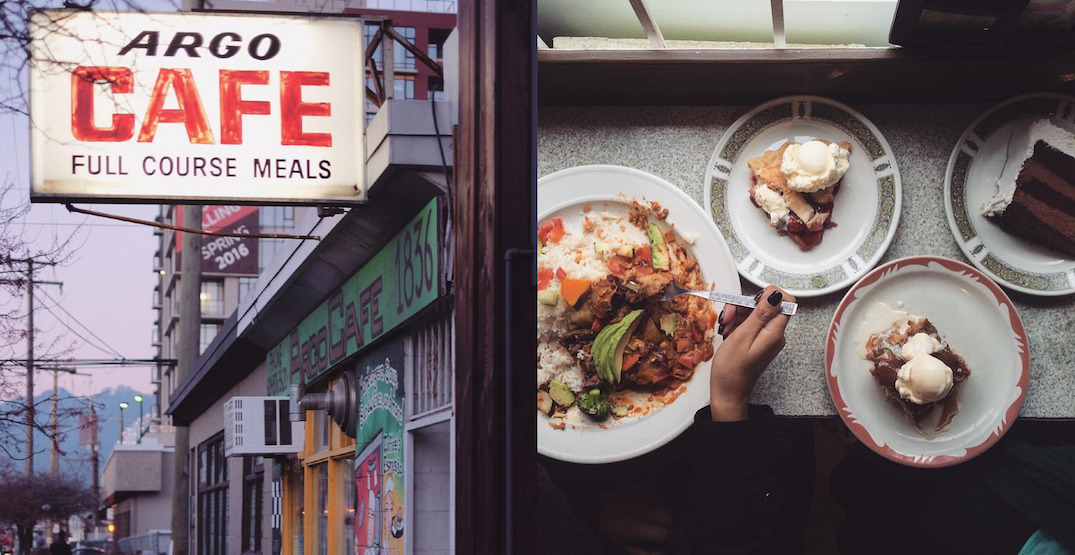 Tucked between Mount Pleasant and Olympic Village is a little unassuming diner that’s survived the many, many changes to the neighbourhood over nearly seven decades.

Argo Cafe has existed in one form or another since 1954 – which basically counts as eons in a constantly evolving city like Vancouver.

Walking by this spot, you’ll recognize it by its quirky mural, bright yellow window frames, and hand-painted signage. The original diner sign still hangs above the establishment, too; the old sign didn’t light up for many years and was only repaired in 2015, once again shining “Argo Cafe, Full Course Meals” through the night.

It’s these touches that make dining at Argo feel like you’re experiencing an era of old Vancouver, one that has largely been erased by new condo developments and large chain restaurants.

While this spot is known by many, its location amidst industrial buildings – where uniforms go to be professionally cleaned and cars go to be repaired – places it squarely “off the beaten trail,” and off the mainstream radar.

When you come across Argo for the first time you’ll wonder how you’ve never been here before – the sign of a true hidden gem.

It feels like a greasy spoon the way greasy spoons ought to feel – like a diner out of time, where the experience is more about the food and the company than how “Instagrammable” things are. This is the place to go for a black coffee, a plate of eggs with bacon, and a slice of pie to finish things off.

In 2004, the diner was taken over by Chef Denis Larouche and his brother-in-law Kirby Wong. The two set out to keep the greasy spoon vibes, but to turn it into a place that felt unlike any other in the city.

The menu really is quite varied – ranging from traditional diner fare like grilled cheese with bacon to more refined dishes, like a Sockeye salmon almandine – indicating that this place does indeed have an East Van attitude: it does what it wants.

Every day, the restaurant posts its daily specials on the website so you can check in advance to see what you’re getting. These dishes depend partly on what’s in season, but also on the whims of the chef and what they feel like making that day or week.

During the pandemic, the cafe pivoted to serve to-go items, like soups, trays of BBQ short rib mac and cheese, and even breakfast items. It’s once again open for dine-in service, though, which is the way this place needs to be experienced for a first visit.

Kirby Wong sadly passed away in 2014, but Argo continues to be family-owned, sharing its home-style comfort food with those in the know.

Next time you’re in the area, grab a seat in a cozy booth and sit for a while.