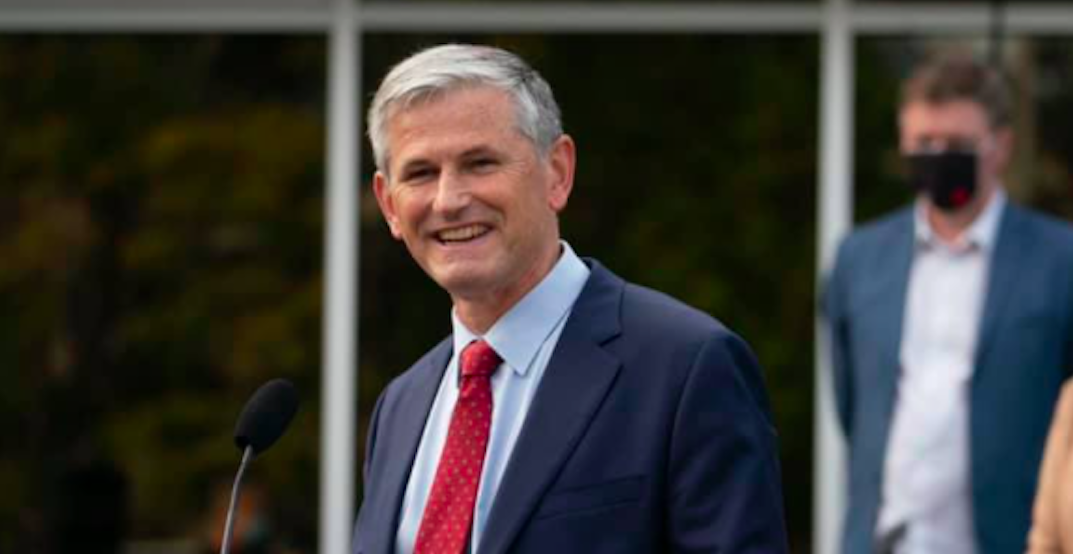 This is the first in a three-part series of interviews with the leaders of BC’s provincial parties.

While his party’s campaign tagline is simply “Restore Confidence. Rebuild BC,” BC Liberal Party Leader Andrew Wilkinson says his vision for the province goes beyond two simple sentences.

And in a recent interview with Daily Hive via Zoom, Wilkinson touched on a number of topics his party has campaigned on and spoke about his plans for BC should he be elected premier on October 24.

When it comes to getting individuals off the street and into safe housing, Wilkinson said it’s time to stop “treating them as a uniform group.”

People, he furthered, “are sleeping in the park because they’ve run out of money, and that’s a particular kind of homelessness that needs to be addressed with things like rent subsidy. So that’s one category.”

Another category is “the people who’ve got brain injuries.”

This is “a whole category of people who need a special kind of care, that is entirely different from the people who have things like schizophrenia,” he said. “It’s a mental illness treatable in ways that aren’t perfect but they are way better than nothing.”

And when housing needs to be provided, it has to come with the support services and some structure “so it doesn’t turn into a camp inside a building, that then spills onto the street,” he said. “Let’s not forget, most of these people are very vulnerable and have almost nothing to fall back upon. The criminal element infiltrates these places because there is no order.”

The results are “little nightmare zones of a whole bunch of people with nowhere to go and no other options, no diagnosis, no treatment plans, and then the criminal element shows up and makes their life utter misery,” he said.

And neighbourhoods around these areas are “paying a very serious price for this sloppiness.”

Wilkinson, who has accused the NDP of “warehousing” the province’s most vulnerable populations, did not get into specifics when he was asked if he has spoken to homeless advocates in recent weeks.

Rather, he stated that “there are all kinds of advocates with different ideas on what needs to be done [and] we’ve got to listen to them [and] look through the eyes of everybody involved.”

The overdose crisis and decriminalization

Asked about his plans to tackle the overdose crisis in the province, Wilkinson said the response can’t be a “simplistic, one-size-fits-all” approach.

“Fortunately, I’ve trained as both a doctor and a lawyer,” he stated. “This is a field in which there are often inputs that don’t seem to amount to anything, while the death toll goes up and up,” he said.

Wilkinson emphasized that the overdose crisis needs to be met with a medical approach.

“This is something where there are parallels with other medical disorders,” he elaborated. “You don’t say that if a particular disease has one cause and one treatment. You say what are the actual underlying disorders, what’s the actual breakdown of what is going to work for that particular condition.”

This, he continued, “is where I’ve said things like providing safe drug supplies, get people in clinical trials who can figure out what works and what doesn’t. Have an open mind, but go into this in a structured way, so you can make progress in learning how to deal with this and how to make the right diagnosis to make the right treatment. Don’t march down the street saying, ‘I have the cure.'”

As for decriminalization, Wilkinson said such measures do “nothing to treat health problems.”

In his view, all this does is “take the prosecution pressure for people with drugs for personal use,” and said it bothers him “when people say, ‘go to the federal government and solve this problem.’ I don’t see that as treating anybody’s Hepatitis C, anybody’s addiction, or anybody’s dependence on substances to get through the day.”

And while he recognizes that “there is a very small number of our society who will probably be using injectable narcotics for rest of their life,” this is not the answer “for the thousands of people we see in the streets of Vancouver.”

Regarding the current government’s pandemic response and if his party would chart a different course if elected, Wilkinson said, “we decided back in March that the core message was that we need to fight the virus, not each other.”

If he’s elected, Wilkinson said his experience as a doctor gives him “a lot of comfort” in having “informed and technical conversations with Dr. Bonnie Henry.”

Wilkinson said he does take issue with the current government’s timing around announcing its economic recovery plan, though, which in his mind came too late.

“Every province except BC put out their economic recovery plan in June or July,” he said.

In order to make BC “fly once more” Wilkinson credited the province for its “high-skilled” population. The key now, he said, is to build on that momentum with human capital and government capital.

Wilkinson also referenced the “Restore Confidence” tagline of his campaign.

“You’ve got to give people the sense that we have confidence in you,” he said. “This is an ability of people to pick themselves up and say, ‘We’re going to do this well and we’re going to do this together.’ And then you get to the rebuilding stage. These are the kinds of things where what we’re saying to each other is we believe in you. We’ll get through this, let’s pick ourselves up, let’s work together, let’s do our best, and we’ll get through this.”

And part of restoring this sense of confidence and opportunity comes in the form of things like infrastructure spending, he said.

“We’ve got to be bold. We have to do stuff now while the government can borrow money at very, very low interest rates for the betterment of everybody.”

During his election campaign, Wilkinson has promised an $8 billion infrastructure plan, which includes a 10-lane George Massey Bridge, which he told Daily Hive would be completed by 2025.

He said BC needs to take inspiration from the past, such as the 1930s, where civil work projects helped “get people moving.”

Homophobic and transphobic rhetoric within the party

When it comes to some members of his party — such as Chilliwack-Kent candidate Laurie Throness — who have expressed homophobic and transphobic rhetoric, Wilkinson said, “We need to be crystal clear about this: In my close family there are gay people and lesbian people, [and] I love them dearly. I am proud of them. They deserve respect, they deserve to live a life free of discrimination. Period.”

Wilkinson said his party’s policy “and the law of BC is that there is no discrimination based on age, nation of origin, who your parents are, gender, sexual orientation income. All of those things are true for our candidates too and they know it. Everybody is on the same page as we move forward, and my position has been crystal clear from the start.”

Asked how he reconciles this stance with alternative views those in his own party have expressed, Wilkinson said, “Some of these are manufactured controversies about procedural votes and municipal councils and things.” But, he says, “when it comes down to someone who has any views about these things in keeping with that party policy and my own views.”

In the days following Wilkinson’s interview with Daily Hive, the BC Liberal Party announced it parted ways with Throness, who most recently faced backlash for comments he made comparing free contraception to eugenics. In the past, Throness has been called out for his anti-LGBTQ views.

“There’s a very clear direction,” said Wilkinson. “Either you’re on this team or you’re not, so make your position clear.”