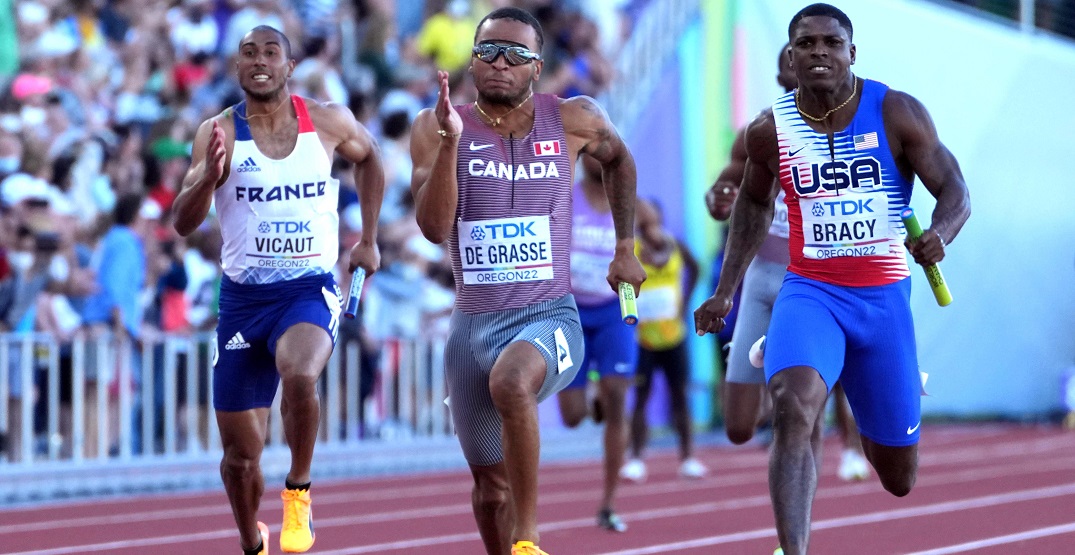 When Canadian sprinter Andre De Grasse took to his first two events at the World Championships earlier this summer, it’s safe to say it didn’t quite go as planned.

Coming off a recent bout of COVID-19, De Grasse failed to qualify for the 100m final, while eventually withdrawing from the 200m event entirely. As the Olympics’ reigning bronze medallist in the 100m and the gold medallist in the 200m, his absence was definitely felt in the Eugene, Oregon crowd.

But with a bit of an extended break following his withdrawal from the 200m, De Grasse came up big in the anchor leg of the 4x100m relay, setting a Canadian record time en route to the gold medal win.

“It’s really special,” De Grasse said in an interview with Daily Hive, adding Canada hadn’t won gold in that event at a major competition since the Donovan Bailey-led side at the Atlanta Olympics in 1996. “We got that opportunity to kind of repeat history.”

While his anchor leg was the highlight of the race, De Grasse showered praise on teammates Aaron Brown, Jerome Blake, and Brendon Rodney.

“I’m really excited about the future with us as a relay squad because we made history and it’s been 25 years since that happened. So for us, it’s a great feeling and we hope to get more feelings like that again in the future,” De Grasse said.

Eyes on the prize

Andre De Grasse first became a household name at the 2016 Olympics in Rio for his rivalry with Usain Bolt and has since become among history’s most decorated sprinters.

CAPTION THIS: What was Usain Bolt saying to Andre De Grasse in this photo? Tweet us! #DeBolt #Rio2016 pic.twitter.com/qMwBrRQsQQ

And while he’s picked up six medals at his two Olympic appearances as well as five medals in three World Championships, De Grasse says he isn’t one to rewatch his medal-winning races.

“I kind of just move on… I don’t try to stay in the past,” De Grasse said. “When my career’s over maybe I’ll kind of reminisce and watch them multiple times, but as of right now, I don’t [watch them.] I really only look at [replays of my races] if someone else is looking at it.”

Part of De Grasse’s recent set of media appearances in Toronto included an event for the release of Cheez-Made’s chicken-less nuggets, the first-ever dairy-based meat alternative product in Canada.

“I think of myself as [like] a fast car,” De Grasse said about his own diet and conditioning. “You want to put that premium oil and you don’t want to put that regular gas in your body because then you’re gonna break down. So, for me, that’s kind of how I think of my body and I just want to make sure that I put all the right stuff into it.”

De Grasse is also the founder of the self-titled Andre De Grasse Family Foundation, which looks to inspire and empower youth “through access to sport, education and healthcare, including mental health,” per his website.

“I had a lot of support when I was growing up and I just want to be able to return that favour to the next generation of athletes,” he said.

When it comes to his advice for young athletes, De Grasse said his own setbacks can provide inspiration for those looking to follow in his footsteps.

“There’s always going to be ups and downs in the road, but continue to just push yourself, fight, and really just keep striving for your greatness for yourself and eventually you’ll be successful,” he said.