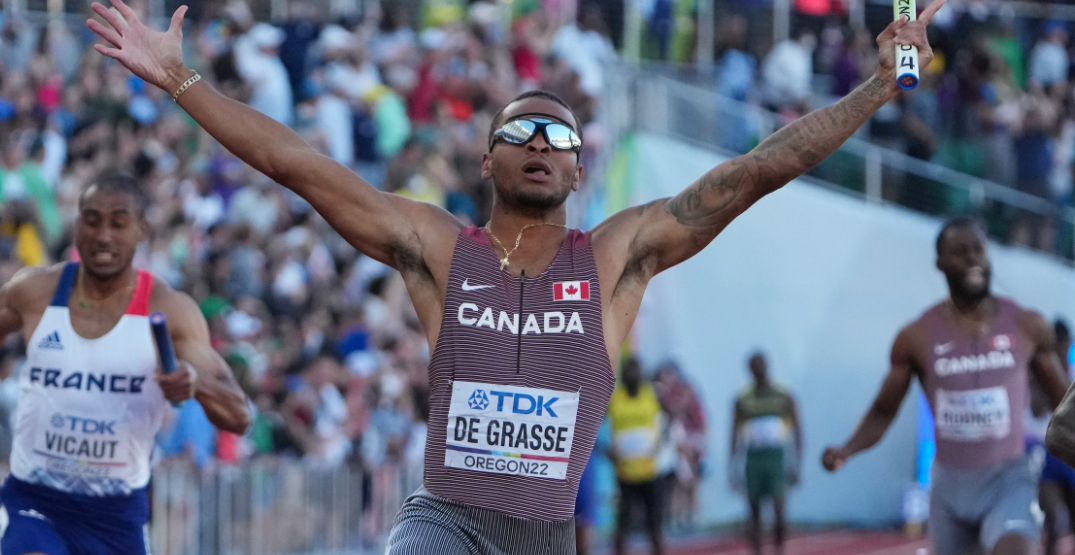 Andre De Grasse anchored Canada to gold in the men’s 4x100m relay and helped set a new national record in the process.

The run, alongside Aaron Brown, Jerome Blake, and Brendon Rodney, clocked in at a world-leading time of 37.48 seconds and came after De Grasse withdrew from his 200-metre race earlier at the World Athletics Championship.

What a race for the Canadians as they win gold in the men's 4x100m relay pic.twitter.com/xI4vVEUWw8

“It’s special,” said Andre De Grasse after the race, according to The Oregon Overview. “There was a lot of Canadian flags out there. It definitely feels good. We weren’t on home soil, but it definitely felt like it.”

De Grasse, Canada’s anchor, had dropped his 200m race earlier this week because of his ongoing recovery from lingering COVID-19 symptoms. He contracted COVID-19 a month ago and did not qualify for the 100m final. He is the reigning 200m Olympic champion, winning in a Canadian record 19.62 seconds at the 2020 Tokyo Games.

He overtook American Marvin Bracy to secure the win for Canada, the first in the event since 1997, when Robert Esmie Bruny Surin, Donovan Bailey, and Glenroy Gilbert, the current Athletics Canada head coach, did so in a time of 37.86.

The Americans finished with silver with a time of 37.55, and Great Britain claimed bronze at 37.83.