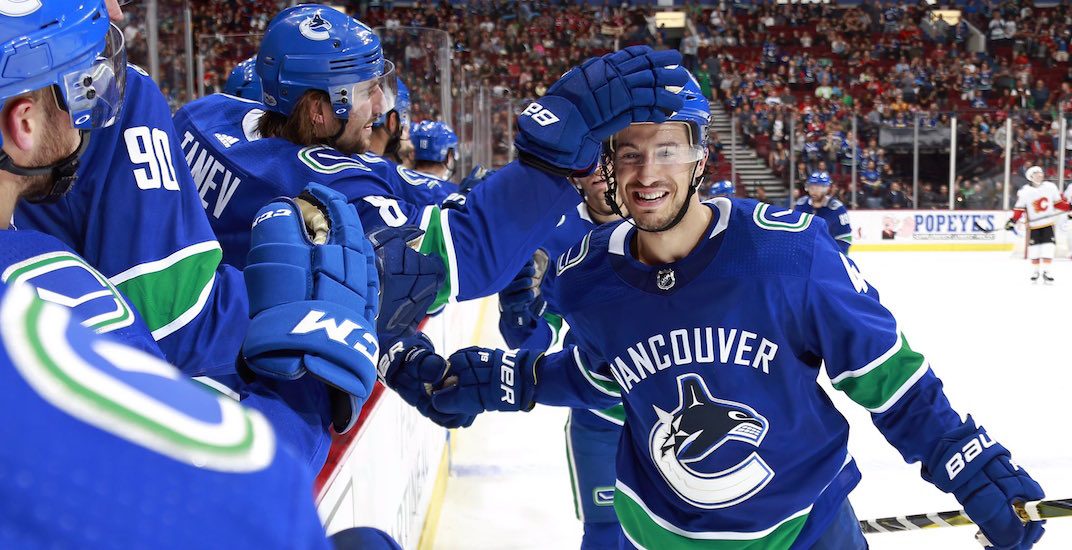 It’s time to add a couple more stats to your analytics toolkit.

Presenting at the Rochester Hockey Analytics Conference earlier this month, analyst CJ Turtoro introduced a study that concluded that some microstats are better predictors of future goal differential for defencemen than Corsi and expected goal related numbers.

In other words, we finally have stats that are proven to be more reliable for evaluating defencemen than Corsi-related on-ice metrics.

What are microstats and what do they tell us?

Microstats are tracked records of individual plays a skater makes.

Moving the puck out of your zone is good. Moving it into the offensive zone, also good. And keeping the puck on your stick while doing it, that’s ideal.

Here are some quick explanations of the most important microstats that the study identified.

A zone exit is counted when a player moves the puck out of the defensive zone. There are two ways to do this.

Using these types of exits we can now define the two stats we’ll use.

A zone entry is counted when a player moves the puck into the offensive zone.

Non-possession entry: Player dumps the puck into the zone

Below are the two relevant entry statistics.

Possession entry % allowed: Percent of conceded entries where the opposition has possession

A shot assist is credited when a player makes a pass that leads to a shot attempt.

Ok, but what has this got to do with the Canucks?

1. Stecher had a very good season

Concern was expressed by some over Troy Stecher’s offensive decline and whether he suffered from the dreaded sophomore slump.

Unpack the layers of his performance using microdata though, and it’s evident that he actually improved his play significantly compared to his rookie campaign. 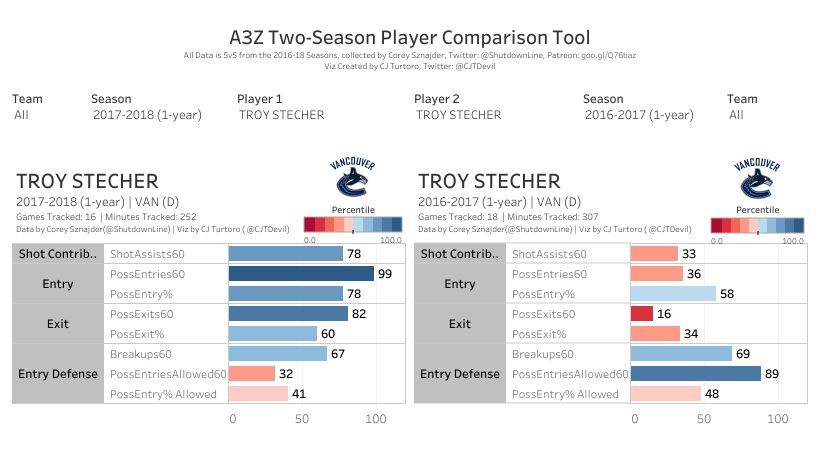 Stecher was the Canucks’ best puck-moving defencemen last season – excelling at both exiting the zone and leading possession entries. In fact, for the latter, he held the third-best rate in the entire NHL. 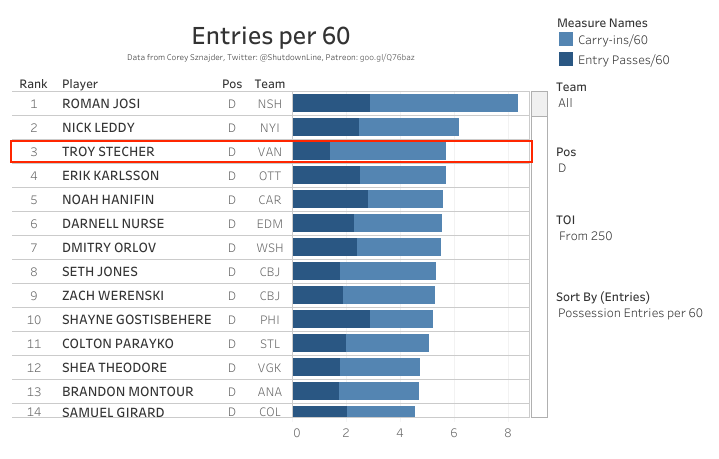 Moreover, Stecher’s shot assist data tells us he improved dramatically in terms of his playmaking in the offensive zone. Ryan Stimson, whose model analyzes this passing data in further detail, projected Troy Stecher to produce primary points at a first pairing rate, if only barely.

These are good signs for Stecher moving forward because it suggests his offensive dip was driven by deployment changes and poor luck rather than subpar play.

2. Tanev wasn’t his usual self

It appears as if injuries are starting to take a toll on Chris Tanev. 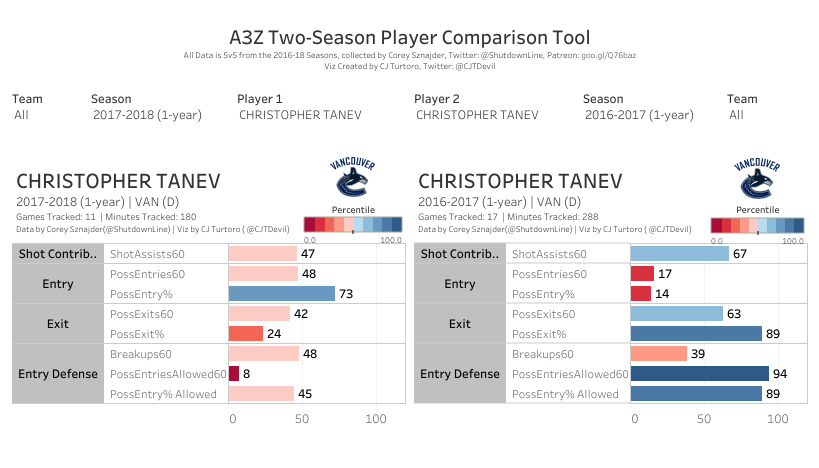 After dominating with his neutral zone defence and puck moving abilities in 2016-17, Chris Tanev took a definitive step back last season.

Particularly surprising was the deterioration of his typically excellent entry defence. In this regard, I’d imagine injuries – he missed 40 games last season – hurt Tanev’s mobility for closing gaps.

On the flipside, one area of tangible improvement was the rate at which Tanev led offensive zone entries.

This makes sense as it was apparent from day one that new head coach Travis Green wanted defenders like Tanev to play a more active role in transition offence.

3. Canucks defencemen were more active in jumping up with the play 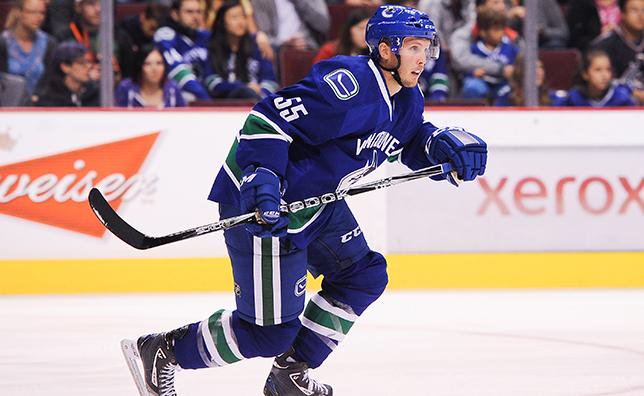 It may not have yielded better results on the scoresheet, but Canucks’ defencemen adapted well to Travis Green’s high-octane transition system. 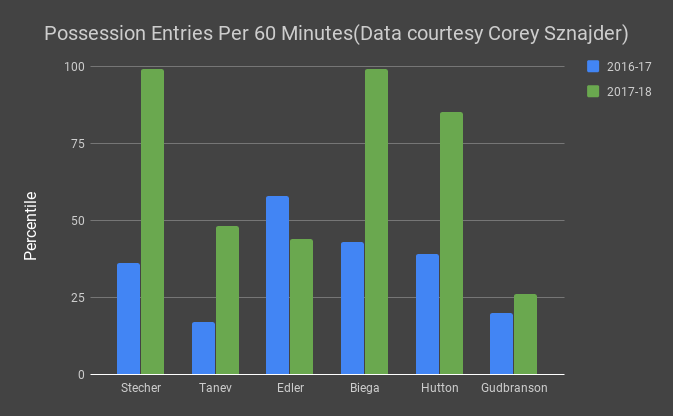 Of the six defencemen that returned to the Canucks’ lineup from 2016-17, all except for Alex Edler significantly improved the rate at which they led zone entries with possession.

4. Hutton deserves a spot in the top-six

There’s no getting around it – Ben Hutton has failed to live up to his potential since leading Canucks’ defencemen in points in 2015-16 as a rookie.

Even with that disappointment, there’s enough in microdata and on-ice numbers alike to warrant another look in the top-six. 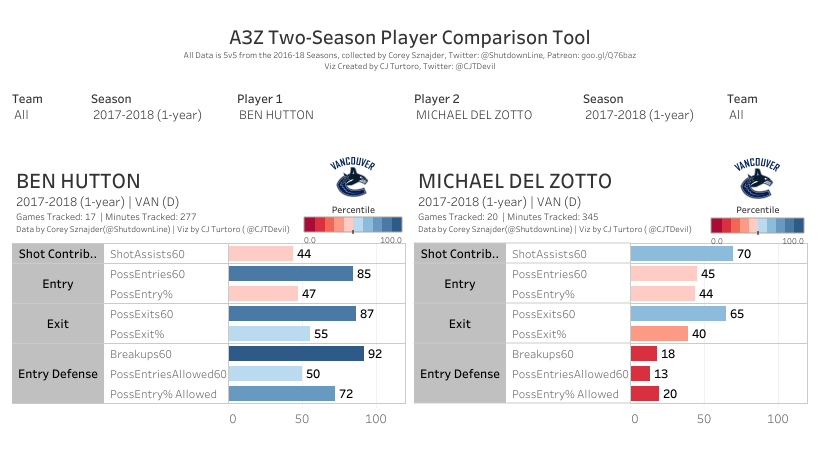 Move past those struggles, however, and you’ll see Hutton’s terrific two-way work in transition.

The 24-year-old regularly forced turnovers and dump-ins, whilst also showing the requisite skills to retrieve the puck and safely move it the other way.

Vancouver’s blueline sorely lacked this sort of two-way contribution; Hutton ranked as the only defender on the team to finish above the 50th percentile in all zone exit and neutral zone defence categories.

5. Canucks defencemen struggled to move the puck out of their own zone 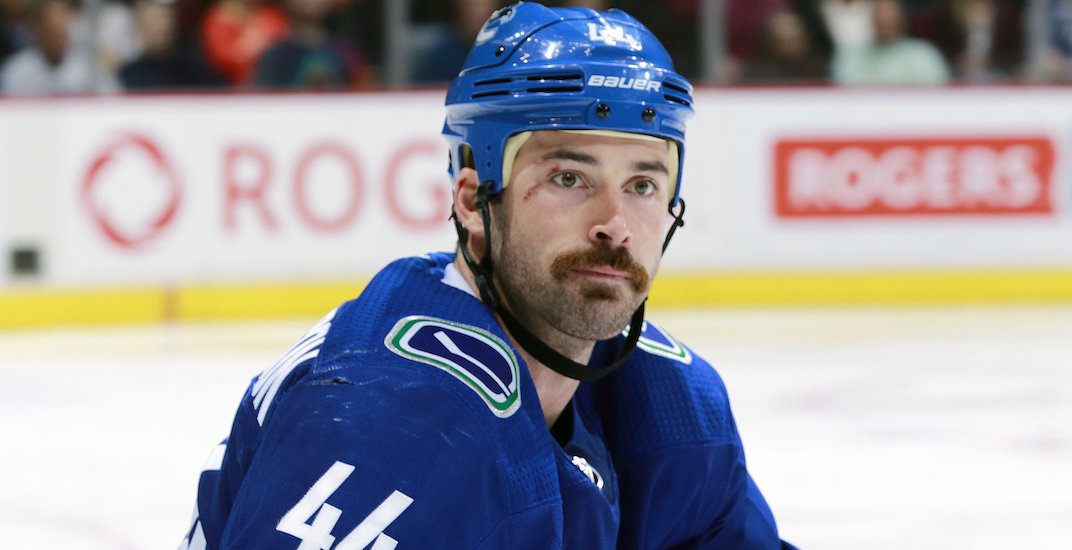 There are many issues with the Canucks’ blueline, but perhaps the greatest problem is their inability to safely move the puck out of the defensive zone. 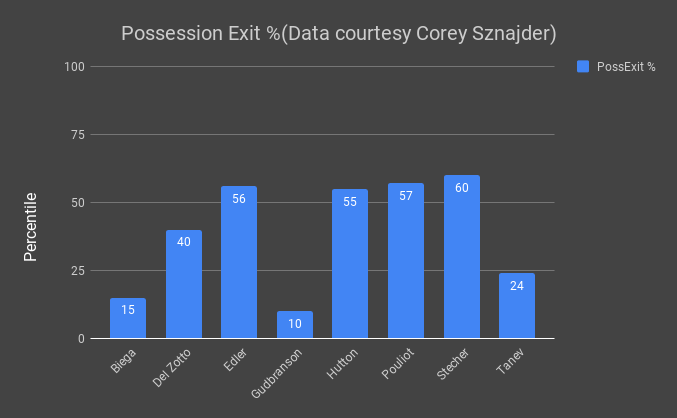 This means the Canucks failed to cleanly lead breakouts from their own zone – opting to instead dump pucks out at a high rate. As a result, the team was hemmed in their own zone longer and left without possession of the puck when they did manage to finally get out.