Advanced stats are by no means the be-all, end-all for player evaluation, but they’re particularly useful for identifying players that quietly drive play for their team.

With that in mind, here are five Canucks’ players that are probably better than you think.

But there’s an argument to be made that Hutton performed measurably better than he was given credit for.

The first sign of this is that the Canucks controlled 49% of the shot attempts (Corsi %) with Hutton on the ice – a mark that was third-best among Canucks defencemen.

A similar story can be told when looking at Hutton’s scoring chance (SCF%) and expected goal (xGF%) shares, by which he sits third and fourth on the blueline respectively.

Perhaps most surprising is that he posted very good underlying numbers when playing with Chris Tanev in a shutdown role. Together, they were the 20th-best pairing in the league for Corsi percentage relative to the team, 21st in preventing unblocked shot attempts against (FA/60), and sixth in controlling 68.4% of the goals scored.

You can argue that Tanev carried the duo, but his on-ice numbers suffered dramatically when playing away from Hutton.

With just 14 points in 38 games, Nikolay Goldobin’s offensive numbers last year may not jump out at you, but there are indications he could thrive in a bigger offensive role.

Such a role is warranted given that he scored 1.79 points per hour in all situations – a rate that slots right behind Bo Horvat and Sven Baertschi and is commensurate with a low-end top-six forward.

That rate rockets to nearly 2.7 points per hour when playing with Horvat, to go along with on-ice numbers that suggest Goldobin drives two-way results better than Baertschi on the top line.

There’s no denying that the Loui Eriksson signing has been an unmitigated disaster.  Eriksson’s production has not, and likely never will, meet the expectations created by his six-year, $36 million contract.

Failing to score more than 24 points in each of the last two seasons, his contract is one of the worst in the NHL.

That being said, the 33-year-old had a modest improvement in points per game last year.

After a dreadful 2016-17 season where Eriksson produced just 1.19 points per hour, he climbed back to a respectable 1.7 points to slot in at eighth on the team.

He managed this despite averaging the lowest power play time of his career. Eriksson also saw significant playing time with Brandon Sutter and Markus Granlund, playing in a checking role. 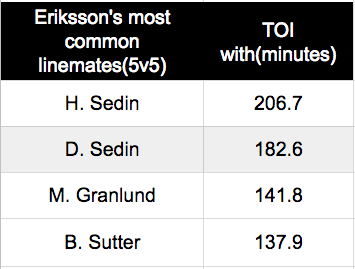 Even though Eriksson wasn’t given a ton of offensive opportunities, he still managed to generate individual shots and high-danger shot attempts at the best rates of his career. He accomplished this while maintaining his sterling two-way play, finishing fourth among Canucks’ forwards for Corsi %.

The departure of the Sedins, combined with the signings of defensive forwards like Jay Beagle, Tim Schaller, and Antoine Roussel should free up Eriksson to play in a more offensive role next season.

Scoring 22 points in 71 games – second-best among Canucks defencemen – he proved himself at the offensive end of the rink. But can he be trusted defensively?

Pouliot finished second-best among Canucks’ defencemen for Corsi, scoring chance, and expected goal shares. A big reason for this was because Pouliot actually suppressed shots against at the third-best rate of any defender on the team.

He posted these numbers despite being dragged down by Michael Del Zotto as his most common defence partner.

Jake Virtanen registered just 20 points in 75 games, though it seems he’s driving play in ways that aren’t showing up under his point totals.

The most telling sign of this is having the third-best Corsi % among Canucks forwards, but it goes far deeper than that.

Virtanen was tracked as having the sixth-best rate in the NHL for entering the offensive zone with possession of the puck. 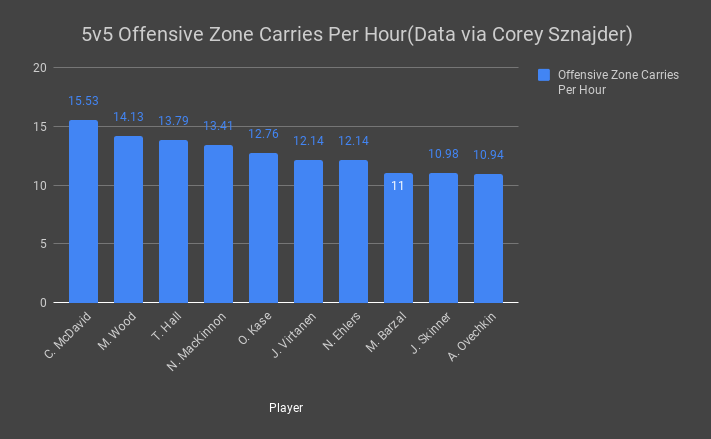 Carrying the puck into the offensive zone is proven to be twice as likely to produce shot attempts and nearly twice as likely to result in a goal. Intuitively it makes sense as well; you’d prefer to enter the zone with the puck on your stick compared to a situation where you dump it in and hope to get it back.

This means that Virtanen is consistently creating a territorial advantage for his linemates, even if he doesn’t get credit for the goals they might score with it.

Should Virtanen, or his linemates, manage to improve their finishing, it’ll only be a matter of time before he starts receiving some of the credit he deserves.