Brock Boeser’s going to get paid.

Exactly how much he takes home is the million dollar question, and with Boeser eligible for a new deal as of July 1st, it’s become a relevant topic of discussion in Vancouver.

The 21-year-old rookie shattered expectations this year by scoring a team-high 29 goals and 55 points in 62 games before succumbing to a season-ending back injury. Along the way, he became the fastest Canucks’ rookie to score 20 goals, won All-Star Game MVP honours, and finished second in Calder Trophy voting.

He was on pace for 37 goals and 71 points  had he played a full season – totals that would have passed Pavel Bure’s rookie record for the Canucks.

The dilemma as it relates to Boeser now is how to approach his contract situation. A restricted free agent after next season, a decision is needed on whether to sign the former first-round pick this offseason or the next.

In many ways, his limited 73-game NHL sample is a double-edged sword in negotiations.

While Boeser scored goals and points at an elite level, concerns centre around the fact that he’s done it for less than a full season on the back of an unusually high 16.2% shooting clip.

Here's a list of players in the cap era who have shot >15% while taking over 2.5 shots/game, with at least two full seasons played. Kucherov falls back off the list if a goalie stops his next shot. I wouldn't bet that Boeser, or anyone, will remain **6% better** than this. pic.twitter.com/VZDc4M3XfA

It’s tough to count on Boeser to sustain this conversion rate when other volume shooters like Alex Ovechkin and Vladimir Tarasenko carry percentages in the 12-13% range.

For reference, a dip to 13.5% would have meant five fewer goals than the 29 Boeser actually scored.

There’s an outside chance that he and Laine are the next snipers to sustain exceptional shooting percentages, but it certainly wouldn’t hurt to have another season’s worth of data to know for sure.

The price could still go up

On the other hand, there’s a possibility that Boeser puts himself in a stronger negotiating position next summer by replicating his performance from last season. Moreover, stars like Patrik Laine, Sebastian Aho, Mitch Marner, Mikko Rantanen and Kyle Connor are all due for extensions next summer that could inflate the market value for scoring wingers.

All that doesn’t even take into account how the rising cap could affect negotiations.

David Pastrnak, for example, signed for an annual average value of $6.67 million on a six-year extension with the Bruins last summer. His contract consumed 8.9% of the $75 million salary cap in 2017-18, but with the ceiling increasing to $79.5 million next season, it becomes a cheaper deal in relative terms.

Should Boeser ink an extension that eats 8.9% of the ceiling now, you’re looking at roughly a $7.1 million cap hit – about $400,000 more expensive than Pastrnak’s yearly earnings.

Assuming the cap continues rising beyond next season, the Canucks will have to fork over a bit more cash if they wait to re-sign the 21-year-old.

Examine both sides of the coin and it’s clear there’s some degree of risk to both approaches. Weighing those risks against each other becomes easier once we establish what kind of money Boeser might be looking for if he were to sign now.

The salary cap’s volatility makes looking at the percentage of the ceiling a contract consumes at the time of the signing, rather than the annual average value, the best approach when comparing contracts.

The best way to estimate what Boeser might sign for now is to lean on past extensions to set a precedent for the current situation.

Above, I compiled a list of 20 to 22-year-old forwards who signed a long-term extension with only one prorated 60+ point season under their belt. Forwards were ineligible for this group if they had 40 or more points as a teenager in the NHL.

Players in this cohort averaged 71 points per 82 games in the season prior to signing their extensions and took home 8.8% of the cap ceiling on average; otherwise translating to a $7 million annual value based on 2018-19 dollars.

Boeser’s case is a bit more rare though, in that teams can’t give him an offer-sheet next summer like they could have with players like Pastrnak and Nikolaj Ehlers. This creates a leverage difference that draws parallels with Johnny Gaudreau’s situation with Calgary – a negotiation that saw the Flames’ winger settle for $6.75 million annually over six seasons in 2016 after scoring 78 points in 79 games.

Gaudreau’s cap percentage sat at 9.3%, but he had a stronger statistical profile than Boeser.

Here’s the point production of forwards who signed long-term deals between the ages of 20 and 23 for 8.3-9.3% of their upcoming season’s cap ceiling: 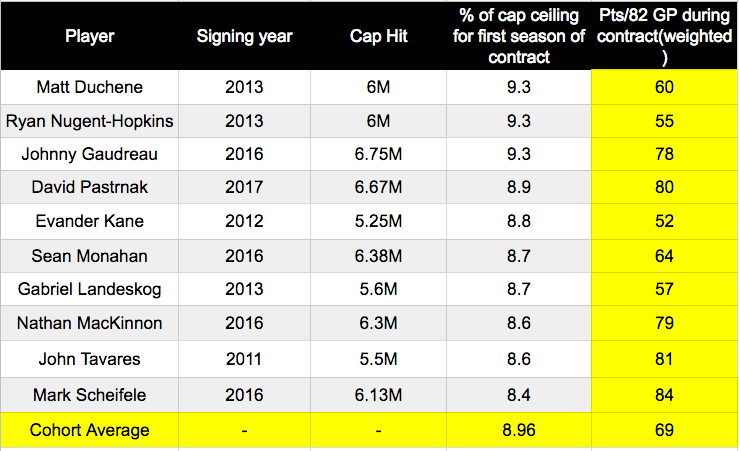 The group averaged just shy of 70 points per 82 games for the duration of their contracts; setting a fairly high bar for Boeser to consistently reach if he were to sign a number within our window.

Ok, so what should they do?

The prudence of extending Boeser this summer depends on the terms they can get him to agree to.

If Boeser hits close to 40 goals and eclipses 70 points next season, it wouldn’t surprise me to see his annual average value next summer climb to $7.5-8 million based on the cap percentage figures that Gaudreau and Tarasenko signed for.

Offering a long-term extension right now in the $6.6-6.8 million range would be reasonable from the team’s perspective given the rising cap and upcoming contracts for comparable star wingers.

If that isn’t enough to entice Boeser, it’s probably best for both sides to ride the season out so that they can work with a larger NHL sample size.