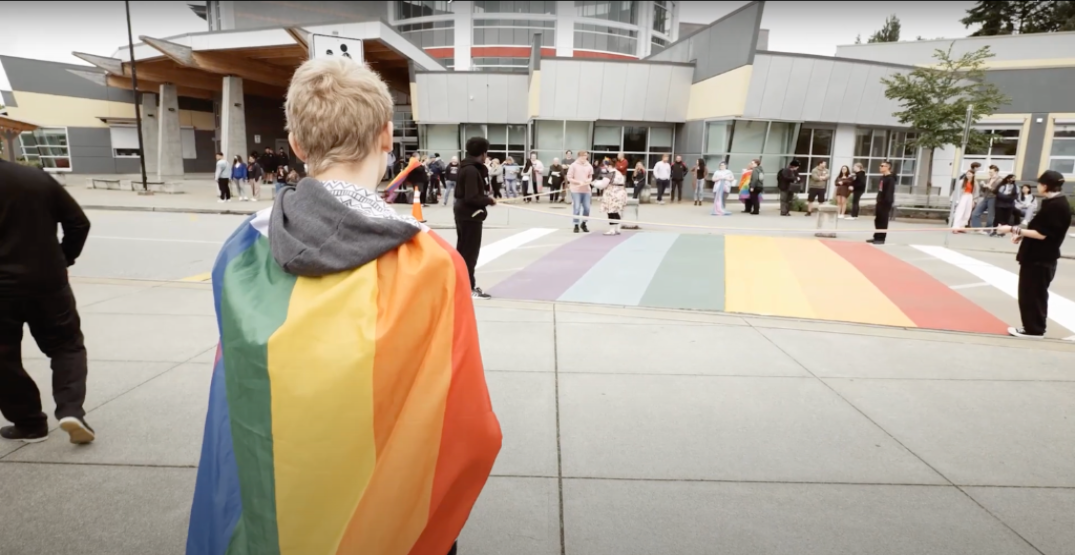 A newly painted rainbow crosswalk in front of an Abbotsford high school has been vandalized.

Abbotsford Senior Secondary unveiled the crosswalk, which was a student-led initiative, late last month. The crosswalk was painted at the main crosswalk leading from the school to the parking lot and sports field.

However, over the weekend, the Abbotsford School District learned the crosswalk was vandalized.

“It is incredibly disappointing that incidents like this continue to happen for those who identify as part of the 2SLGBTQ+ community,” Superintendent Dr. Kevin Godden told Daily Hive in an email statement.

“As a District, we have no tolerance for hate of any kind. We will not let this act of vandalism stop us from continuing to build safe, inclusive, and equitable schools. Most of all, we must speak out against hate and work together to create a community that respects and celebrates diversity.”

It took over 10 years for students of the Panther Pride Club, the school’s Gay-Straight-Alliance (GSA), to plan this initiative.

“The freshly painted symbol is one small way the school and district are highlighting efforts to make schools more inclusive, welcoming, and safe for students and 2SLGBTQ+ communities,” the school board said when the crosswalk was installed.

The school district is in the process of repainting the crosswalk quickly.

It will also be reviewing surveillance cameras to support its investigation.