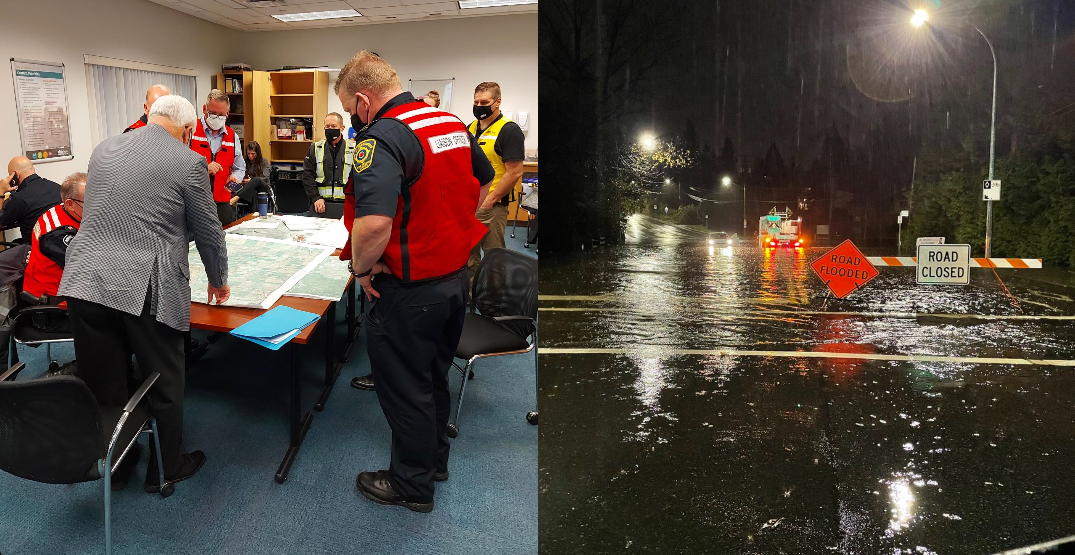 Following record-breaking rain and flooding, the City of Abbotsford declared a state of local emergency that will last for at least a week.

An update from the City says that localized emergencies were caused by extreme rainfall.

There have been evacuation orders and alerts in place, as well as road closures due to flooding and mudslides.

Constable Paul Walker with Abbotsford Police told Daily Hive that “various AbbyPD resources are deployed across the city in a road closure capacity, assisting with evacuations if required, as well as checking in with our unsheltered population, offering assistance where required.”

Right now, the City of Abbotsford has issued an Evacuation Order for 35259 Straiton Road pertaining to units #8, 9, 10, 11, 12. Residents are encouraged to go to the Emergency Operations Centre.

“I’m not aware of any major injuries, but rather only some minor injuries from car crashes within the city,” said Walker.

Mayor Braun and all Senior Managers within the EOC are currently reviewing the overnight events and morning assessments. This is a fluid situation and more information will be coming this morning. Please monitor social media for updates. #Abbotsford pic.twitter.com/1CrANNls4T

All schools in Abbotsford are open, the school district confirmed on Twitter Monday morning.

All #AbbySchools will be OPEN for Monday, Nov. 15th. Some buses may be delayed / running behind schedule.
—
Students – dress for the weather! 🌧 Families – please use caution when travelling to school today and check @driveBC before you leave. ⚠️ #Abbotsford pic.twitter.com/W44p3XcMfM

🚧 Roads Closed Due to Flooding and/or Mudslides:

Residents are asked to plan ahead if they need to travel and to check nearby storm drains to clear them of debris. If locals need sandbags, they can bring a shovel and fill them up at the City of Abbotsford Works Yard.

Abbotsford Residents requiring sand & sandbags can attend the City of Abbotsford Works Yard located at 31739 King Rd. Sand & Bags are located outside the main gates. Please bring a shovel with you to fill the bags.

On Twitter, users shared images and videos showing snapshots of flooding in their neighbourhoods:

How flooded is Abbotsford??? …. Heres the best shot I could get pic.twitter.com/eJYMJbdFiB

Wind and rainfall warnings are still in effect for the Fraser Valley, according to Environment Canada. Central and Easter Fraser Valley received 200 mm of rain already this weekend and another 50 mm are on the way today.