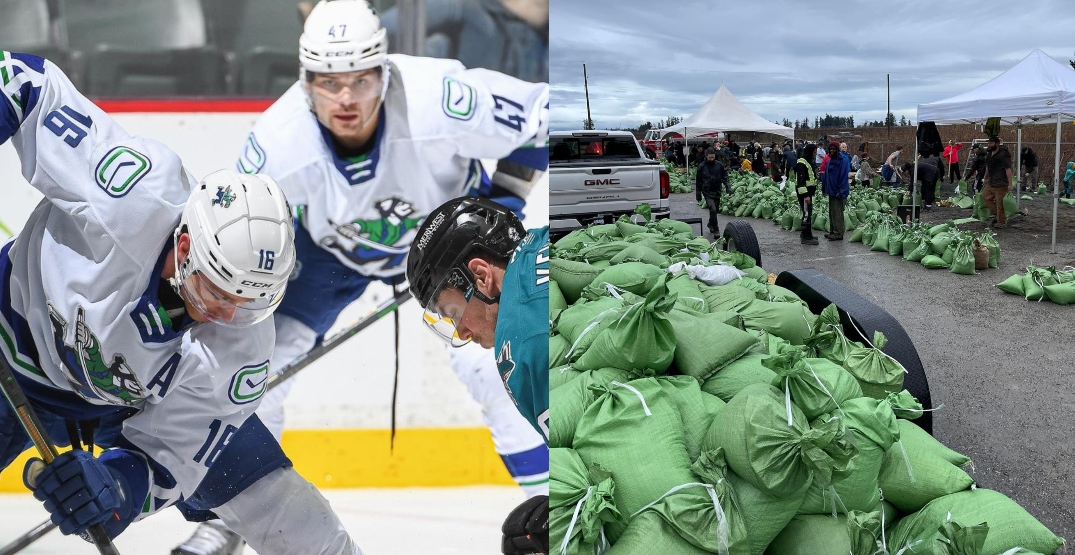 Flood prevention efforts in Abbotsford now have the help of some local professional hockey players.

In an email to Daily Hive, the Abbotsford Canucks confirmed that 16 of their players and their entire coaching helped fill sandbags at Albert Dyck Park today.

All of the Abbotsford Canucks’ coaches are now volunteering at Albert Dyck Park in Abbotsford.

The group includes Abbotsford native Noah Juulsen, who is a former first-round draft pick who has earned more than $2.3 million in his career, according to CapFriendly. Vincent Arseneau, Chase Wouters, and John Stevens were also among the players there.

A call to help fill sandbags at Albert Dyck Park was put out as Abbotsford faces more potentially devastating flooding this week. A tiger dam was built along the Trans Canada Highway on Sunday night with the help of the military.

This was the scene at Albert Dyck Park on Saturday:

The Vancouver Canucks moved their farm team from Utica to Abbotsford this year, with the team playing games out of the Abbotsford Centre. Home games at the Abbotsford Centre were impacted by the floods, with games being postponed on November 19 and 21. After a pair of road games, the AHL Canucks are scheduled to start a three-game homestand on Tuesday.

The Vancouver Canucks, who are currently on a road trip, recently helped to raise $1 million for BC flood relief through their 50/50 program.