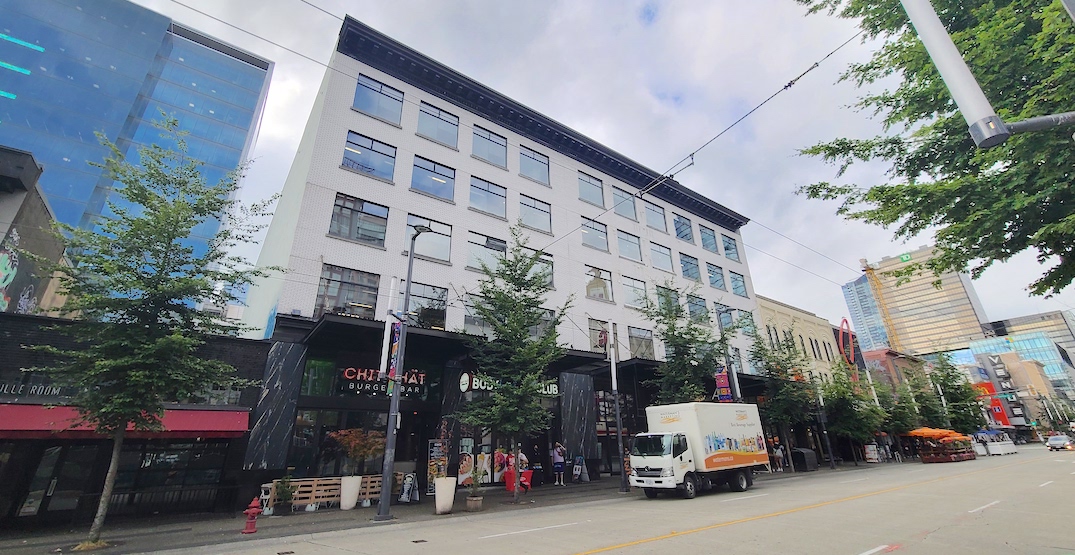 The former longtime Tom Lee building on the Granville Entertainment District is now leased to Microsoft for its office expansion needs within downtown Vancouver.

The global tech giant has leased 63,000 sq ft of office space at 929 Granville Street, according to NAI Commercial.

Other sources also tell Daily Hive Urbanized this is intended to be a temporary arrangement for Microsoft until its permanent expansion space currently under construction elsewhere in the city centre reaches completion.

Up until early this year, Deloitte occupied the former Tom Lee building for its temporary office uses as well. Tom Lee vacated the 1927-built, six-storey building after three decades in 2017 and relocated to a smaller space above London Drugs at Vancouver City Centre down the street.

After acquiring the building, local developer Bonnis Properties renovated the former Tom Lee store for Spaces’ new co-working office location in 2018, but it was later sub-leased to Deloitte as a placeholder office location. Deloitte’s Vancouver office was previously located at Bentall Centre, and the company just relocated to the newly completed Deloitte Summit office tower at 410 West Georgia Street, where the firm now occupies about 120,000 sq ft of office space.

The giant “Deloitte” sign above the entrance of 929 Granville Street was recently removed.

Microsoft already has about 162,000 sq ft of office space above Nordstrom within the CF Pacific Centre mall building, including the 2021 expansion that took over Mobify’s 20,000-sq-ft office. Last year, it also opened a 75,000-sq-ft office within the entirety of a newly-built, seven-storey office building at 155 Water Street in Gastown.

The company also has other office locations at 858 Beatty Street next to BC Place Stadium and 155 Water Street within The Landing building next to Waterfront Station.

Microsoft’s new temporary office at the former Tom Lee building better prepares it for its major expansion office at the B6 office tower, where the company will take over at least 400,000 sq ft across about 20 floors of the 33-storey office tower. B6 will reach completion in 2023.

Daily Hive Urbanized has reached out to Microsoft for further comment.