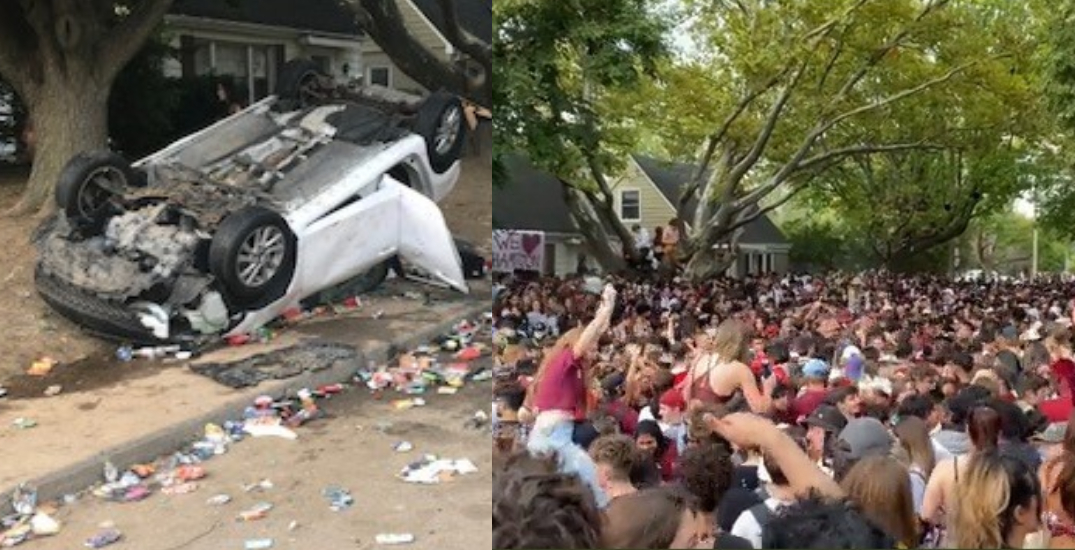 Seven people were arrested and several injured after thousands of McMaster University students took to the streets for a “fake homecoming” event on Saturday.

Hamilton Police said officers were called to the Ainslie Woods area around 12:30 pm for reports of a large gathering. Police said by 2 pm the crowd had grown to 5,000 people.

Photos shared on social media show a residential street packed with people, including several in trees. Images of the aftermath reveal an overturned car and garbage strewn about.

This is unacceptable & dangerous. Someone is going to get killed. Past time for @McMasterU to own this annual community debacle. Let’s send them the bill for all policing, paramedic & clean up costs. Mac President – get your house in order & stop trashing ours. pic.twitter.com/KIh6oIXq6I

Over the course of the day, officers arrested and charged two people for offences under the Liquor Licence Act, and five people for causing a disturbance.

While no serious injuries were reported, several people were treated for injuries that were consistent with falling and excessive alcohol consumption.

Police said glass bottles, cans, and other projectiles were thrown at responding officers, and at least one police vehicle was damaged.

Investigators are currently reviewing footage of the event, and are appealing to the public to help identify the individuals responsible for damaging and flipping over a white Mazda.

Police have released photos of one suspect who is described as a white male with brown hair. He was wearing a blue baseball cap, a burgundy and yellow rugby shirt, and khaki shorts at the time of the incident.

He decried Saturday’s “fake homecoming” event, and noted that the university had made the “prudent and safe” decision to not hold any official celebrations this year.

“The vast majority of our students chose not to be part of the gathering,” Farrar said.

“But those who did, and especially those who chose to be reckless and destructive, put themselves and others at risk.”

“McMaster students, and any others who chose to be part of the gathering…owe our neighbours, our emergency workers, and every other student an apology for the disruptions, disrespect of property, and disregard of those who live in our community.”