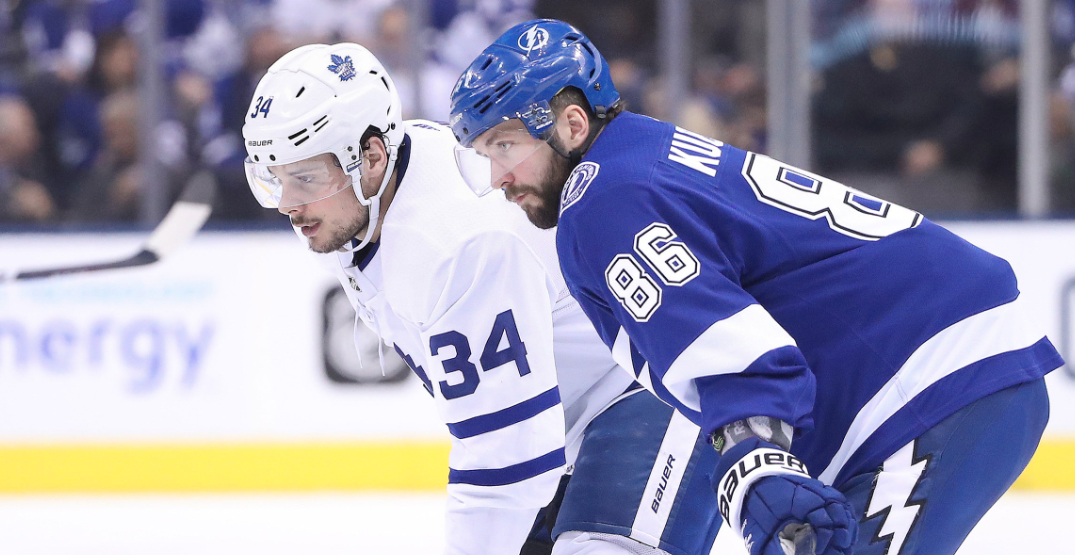 With the conclusion of the regular season on Friday, all eight Stanley Cup Playoffs matchups are set, and there’s certainly no shortage of potential drama — particularly in the Eastern Conference where all eight teams recorded over 100 points through the 82-game schedule for the first time in NHL history.

The Western Conference will be no slouch, either, with seeding determined in the final game of the regular season.

The 16-team tournament kicks off Monday. Here’s what the opening round looks like.

The Colorado Avalanche were the toast of the Western Conference this season, finishing first with a 56-19-7 record for a Central Division-leading 119 points. The Nashville Predators, on the other end, claimed the second wild card into the playoffs from the West after a stunning 5-4 loss to the Arizona Coyotes on Thursday. In all, Nashville went 45-30-7 for 97 points.

MoneyPuck, a popular public analytics site, gives the Avalanche a 77.1% chance of advancing to the second round.

The Minnesota Wild, who finished second in the Central Division with a 53-win season, will have home ice advantage against the St. Louis Blues. The Blues finished just four points back of the Wild, and had a better goals differential with a 69-57 advantage. The series will feature two of the hottest teams entering the playoffs, with Minnesota having just one regulation win in the final 10 games of the regular season, and St. Louis suffering just two regulation setbacks.

Minnesota, surprisingly, is still strongly favoured in the series with a 71.3% chance of advancing, according to MoneyPuck.

The Calgary Flames clinched a Pacific Division title with plenty of regular-season remaining, and their reward will be to host the Dallas Stars in the opening round. The Flames had a 50-win season and the NHL’s second-best goal differential at +85. The Stars, who were -8 on the season, limped into postseason play with a 5-3-2 record down the stretch.

Calgary’s odds of advancing deeper in the playoffs are the biggest of any team, according to MoneyPuck, with a 80.6% probability of moving on to the second round.

An all-Pacific matchup will have the Edmonton Oilers host the Los Angeles Kings. Edmonton was one of the NHL’s top teams from the All-Star break on, amassing a 49-win season after an incredible slump through December and January that threatened their playoff aspirations. Los Angeles, on the other hand, fell one point shy of 100 on the campaign.

It’ll be a close series, suggests MoneyPuck, with a slight edge going to the Oilers at 55.5%.

The Florida Panthers won the President’s Trophy with the top regular-season record at 58-18-6 and 122 points, and their reward is the Washington Capitals. The Panthers lost just seven times all season on home ice, and that advantage will be on display in this series. Washington, who went 44-26-12 for exactly 100 points, returns much of the roster that won the Cup in 2018.

Still, the Panthers hold the edge ,with a 64.4% chance of advancing beyond the first round of the playoffs.

In an all-Atlantic Division matchup, the 115-point Toronto Maple Leafs will draw the two-time defending Stanley Cup Champions. Ouch. The Tampa Bay Lightning finished five points back of the Maple Leafs through the 82-game schedule, but scored six fewer regulation wins. It’ll be must-see hockey as the Maple Leafs look to advance beyond the first round.

The Carolina Hurricanes convincingly won the Metropolitan Division after a 54-20-8 season saw them collect 116 points — second-most in the East. They’ll draw the Boston Bruins, who claimed the first wild card into the playoffs from the East after themselves amassing 107 points by way of 40 regulation wins — seven fewer than the Hurricanes.

Still, MoneyPuck believes there’s an upset brewing in the series, giving the Bruins a 54% chance of advancing versus Carolina’s 46% in what they’ve determined to be the closest series of the eight playoffs sets.

How about those New York Rangers? The No. 2 seed in the Metropolitan Division, the Rangers might’ve surprised, and opened a few eyes, with a 110-point season by way of a 52-win campaign. The Pittsburgh Penguins, a perennial playoff performer, jumped in with 103 points. Interestingly, just four goals separated the two teams in terms of scoring differential, and the Penguins actually put 18 more pucks behind goalies this season.

Pittsburgh too, is favoured in the seven-game set despite coming in as the lower-ranked seed. MoneyPuck suggests the Penguins have a 65.1% chance of advancing — that’s greater than even Florida’s odds.

* TBD: To be determined