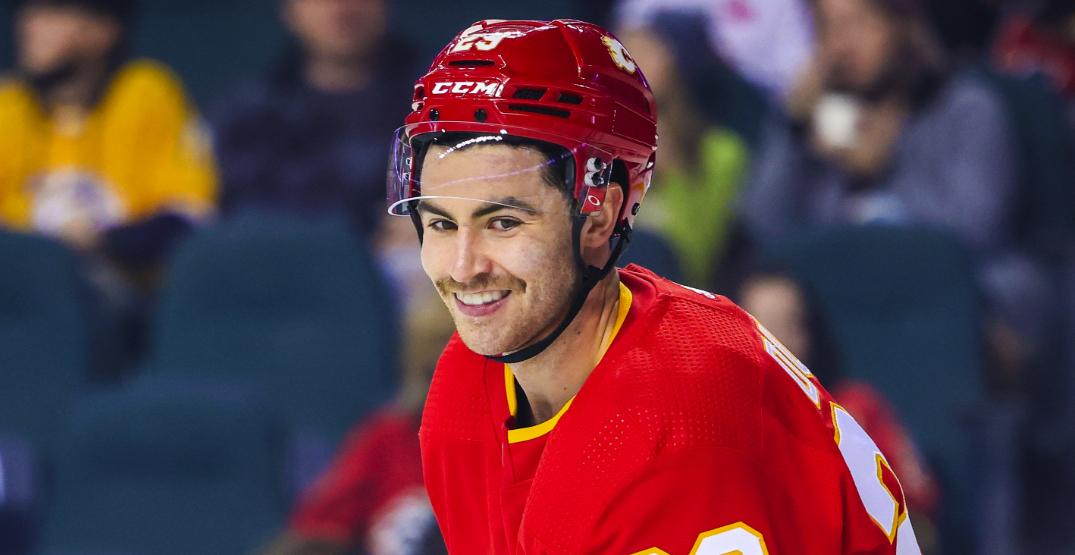 There’ll be a lot of people watching the top players for the Calgary Flames when the team rolls into the Stanley Cup Playoffs next week.

But it might be another deserving of some close eyes.

The third-liner, routinely skating alongside centre Calle Jarnkrok and two-time Stanley Cup winner Blake Coleman has the potential to be Calgary’s breakout star heading into next week’s opening-round series against an opponent that’s yet to be determined.

“What’s he got…seven goals in the last 10, 11 games? Just happy for him that he’s having the individual success,” veteran forward Milan Lucic, a frequent linemate of Dube’s and a previous Cup winner, told reporters Tuesday. “You can see the smile on his face.

“You see the talent and everything that he can bring to a game and to a team, and all that type of stuff. It’s nice to see him heat up kind of at the right time here. He’s an important player for us, and we’re going to need him to continue to play well moving forward here.”

He’s got six in the past six games to pace the team from April 14 onward.

“I just needed to be a lot better for this team going into the final stretch, I think,” Dube said after a two-goal performance against the Vancouver Canucks on Saturday. “Elevate my game to get ready for playoffs and try to get into that spot, and I think I had to be a lot better, so it’s been going better of late.”

Dube has logged 197 games with the Flames in his NHL career, netting 34 goals and 73 points for a points-per-game pace of 0.37.

Not that he necessarily counts that success.

“I don’t really know to be honest,” said Dube, who had just 11 points (four goals, seven assists) in the first 42 games of the season. “That was a long time ago. It was crazy through the quarantine bubble times. It’s going to be a different playoff this year. Can’t be happy about the past. We didn’t go too far that year, so I think it’s kind of collective as a group here; everybody be at their best.”

Dube will be counted on for more than just production in the playoffs.

In that third-line role, he’ll be tasked with helping elevate Calgary’s energy level. The frequent penalty-killer will work on both sides of special teams, too. Mix in a few hits — he’s sixth since the all-star break in that regard among regulars — and there’s a chance that Dube can pick up the mantle of breakout postseason performer left behind by the departure of Sam Bennett last spring.

“He’s playing with a lot of confidence, not just lately. If you look at it, it’s probably since the all-star break,” Flames skipper Darryl Sutter said.

“It gives you a good solid player, a guy who can play both sides. Of all those young guys, he’s one guy that’s proven himself at other levels but on the big stage. He’s played well for us.

“He’s just a kid. I’ve said it before, there’s lots of these guys who were here before they should have been. They should have been learning the game and playing a little longer in the American League level. He’s his own worst critic, and he listens, and I’m good with that.”

It’s a good formula for elevating play when it matters most.

“You put the work in; it gives you confidence,” Dube said.

“It’s just how I’ve been growing up a player. You put the work in; it builds the confidence on the ice, so just everything to get to where I want to be and then be at my best this time of year for just even my body to feel good heading into playoffs.”