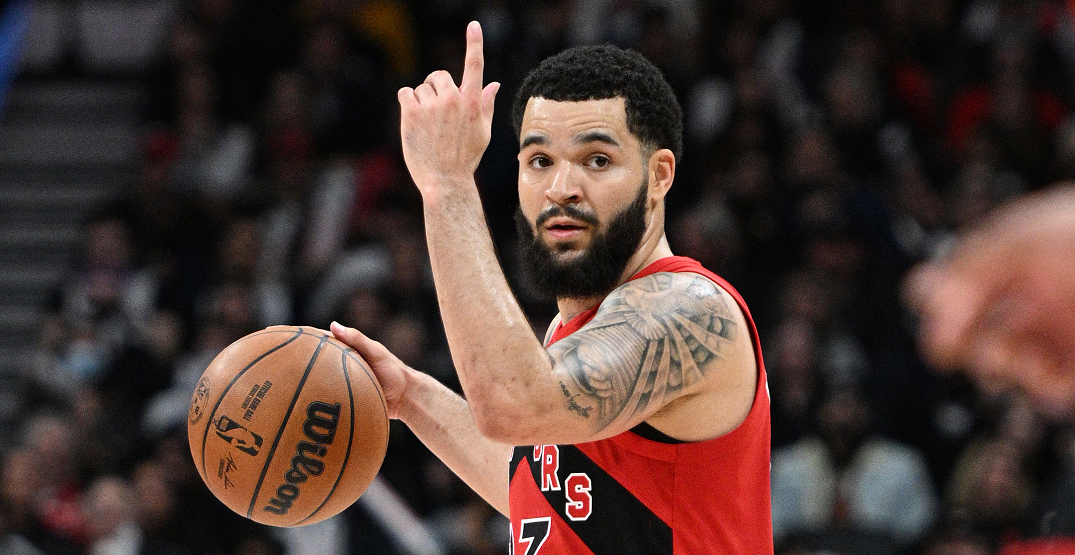 Signing as an undrafted free agent back in 2016, Fred VanVleet has spent his whole NBA career with the Toronto Raptors — and that’s just fine by him.

“I love being a Raptor,” VanVleet said in an interview with Daily Hive. “I would love to spend my entire career here. We have a great relationship with the city, the franchise, ownership, management… it’s a match made in heaven for me. I love being a Toronto Raptor.”

With two years remaining on a four-year, $85 million deal (with a player option for the fourth year), VanVleet is eligible for a contract extension on July 8.

HoopsHype’s Michael Scotto reported this week the Raptors are looking at discussing a possible three or four-year max deal with VanVleet to extend his contract.

While he wouldn’t get into specifics, VanVleet certainly gave the indication that the interest is high for another deal with the Raptors.

“I’m not really too worried about contract discussions or anything like that,” VanVleet said. “That’s just the business aspect of it. And I’m confident that we’ll figure it out.”

On the court, VanVleet’s 2021-22 season was arguably his best to date, picking up an increased role on the team in the absence of Kyle Lowry’s departure to the Miami Heat.

Making the NBA All-Star Game for the first time, VanVleet averaged career highs of 20.3 points, 6.7 assists, and 4.4 rebounds in 65 games this season.

All-Star on and off the court

Off the court, VanVleet was nominated for the NBA’s Kareem Abdul-Jabbar Social Justice Award this past season, and said the honour meant a lot to him.

“I don’t do [community work for the awards], but it doesn’t hurt to be recognized,” he said. “To be appreciated for doing things that are truly in your heart that you care about that you think are important. I think that’s cool because it sends the right message and it may encourage other people to start trying to do their part.”

One of VanVleet’s recent endeavours is being an ambassador for the Blueprint: Backing BIPOC Businesses project, which was created to “support the advancement of 100 new business owners who identify as Black, Indigenous or People of Colour (BIPOC) across Canada.” Through a partnership with Amex Canada, the program offers mentorship and a $10,000 grant to those selected.

Applications are live for the second year of the program, and are open until June 26.

In addition to the Amex partnership, VanVleet started a merch collab with Toronto artist Casey Bannerman and Penny Appeal Canada, launched a new scholarship at the University of Toronto, and started the Bet on Yourself podcast to support BIPOC Canadian entrepreneurs within the past season.

VanVleet said the “limitations, setbacks, and discrimination” that he saw while growing up in Rockford, Illinois have inspired his social justice work.

“[Discrimination] may be overt or covert, you know, depending on how you look at it,” VanVleet said. “And living in Toronto for six years going on seven years, I was able to see some of that up there… it exists everywhere. I just want to be that branch to shine some light on challenges, and then also offer some assistance and just be part of change.”

While there were many ups to VanVleet’s season, it didn’t come with its own set of on-court challenges.

VanVleet dealt with a knee injury through much of the second half of the season, before a hip flexor strain kept him out of the team’s final two-and-a-half playoff games against the Philadelphia 76ers.

“I was kind of down a little bit the way the season ended and obviously being hurt,” VanVleet said of his off-season training while back in Rockford. “Right now priority number one is my body. When I go out there on that court and I feel great, and my body’s feeling strong and fast, I feel like I’m one of the top players in the league. So I’ve just got to find a way to maintain that, sustain that as long as possible.”

Eyes on the prize

As for next season, VanVleet said the Raptors’ identity will be pretty similar to the “aggressive” team that was known for “causing havoc on the defensive end.”

“We can’t change who we are,” VanVleet said. “I think next year from day one of camp has got to be pertaining to ‘how do we get us to a championship level?’ and ‘what does that look like for this group?’ Nothing else can come before that — not any award, any money, not anything. That championship has got to be the number one for everybody.”

VanVleet also said he’s open to experimenting with tweaks to the team’s offence. VanVleet finished second on the team (behind Siakam) with 1,097 field goal attempts this past season, while leading the team with a career-high 642 three-point attempts.

“As a point guard, that’s my job to try to manage that. I certainly have no issue taking a step back if it’s going to make our team better,” VanVleet said. “We’ll see a lot of those younger guys take another step up and that should increase our team value in the way we play.”

VanVleet said he took some time off from watching basketball, but tuned into the Eastern Conference Finals to check out Lowry’s Miami Heat, while he’s used the Boston Celtics-Golden State Warriors series as more of a scouting effort.

“I’ve been watching the Finals, tuning just to see what type of basketball is being played,” VanVleet said. “It’s changing so much from year to year. The way the Finals is going, I can definitely see our team in the Finals having success.”