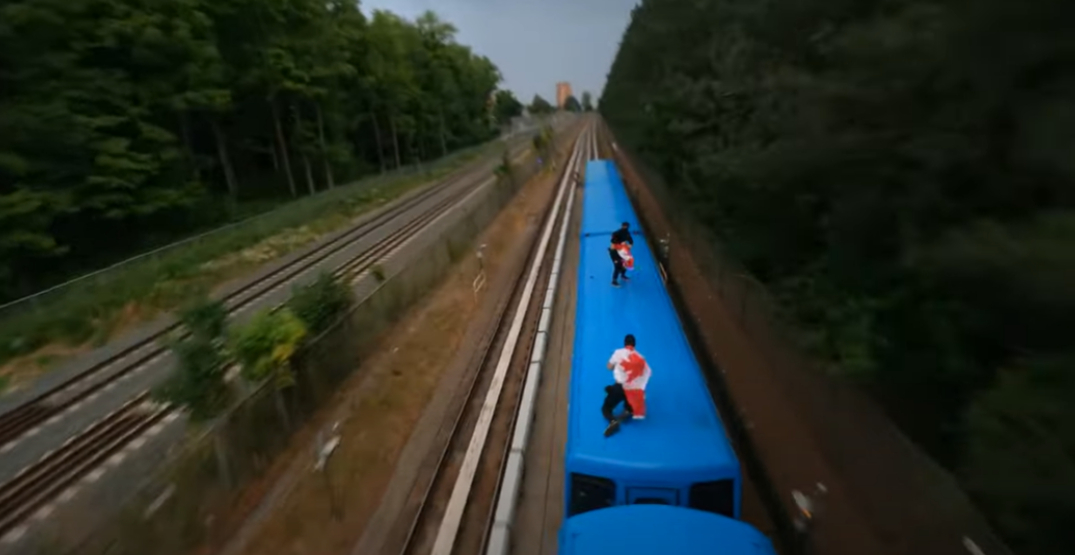 It’s not every day you see someone surfing on top of a fast-moving train while waving a Canadian flag.

A video on YouTube shows two masked individuals “surfing” on top of a Line 3 Scarborough RT train, near Kennedy station. The video, uploaded on July 1, has over a thousand views and the full attention of the TTC, which is now investigating.

The video was uploaded by a user named ChaseTO with the caption “Celebrating the greatest country on earth by surfing trains in my home city. Happy Canada Day.”

ChaseTO has over 3,600 subscribers and an entire playlist devoted to train surfing stunts filmed from around the world.

In a tweet this morning, the TTC calls the incident an “incredibly ill-advised stunt,” adding that those responsible will be “prosecuted to the full extent of the law.”

This weekend, we became aware of recent video showing incredibly ill-advised stunt on Line 3.
It’s under investigation & video being pulled.
These incidents are taken seriously and will be prosecuted to the full extent of the law.
Dangerous and inconsiderate, to say the least.

This isn’t the first time someone has tried to train-surf in Toronto before. One individual was caught going on a joyride near Bathurst Station in August of last year while others tried the stunt just a few months ago near Broadview Station.

There are multiple ways to “Ride the Rocket,” but this isn’t one of them.