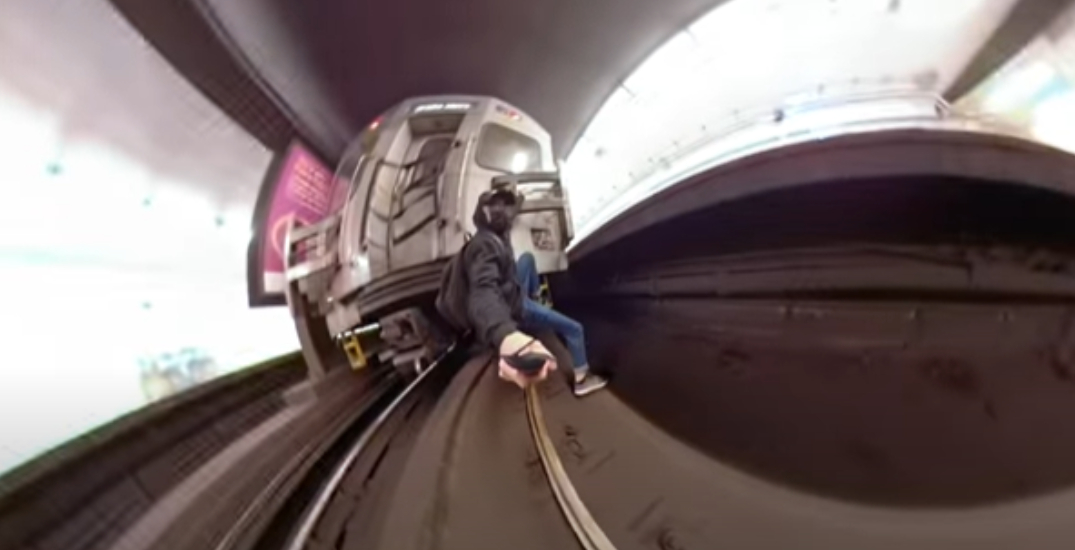 The TTC is investigating after a man filmed himself “train surfing” on a subway car earlier this month.

A video posted on YouTube by user ChaseTO shows a man hopping onto the tracks and grabbing hold of a subway train as it departs Bathurst station.

He hangs off the back of the train, filming himself as it speeds eastbound. The joyride only lasts one stop, though—a conductor spots him as the train pulls into Spadina station.

“The conductor was less than thrilled when he saw me jump off at the next station,” a description for the three-and-a-half minute video reads.

The man then climbs back onto the platform, runs up the stairs, and out of the station.

Originally filmed through a fisheye lens, the video then restarts and shows the incident from the surfer’s perspective.

“We are aware and it has been turned over to our Transit Special Constables to investigate,” TTC spokesperson Stuart Green told Daily Hive.

Green said it’s believed the video was filmed sometime before August 20, since the train in question has not been in service since that date due to an unrelated issue.

Toronto Police told Daily Hive they are currently working to authenticate the video and determine when it was filmed.

“It probably goes without saying that this kind of stunt is not only incredibly dangerous and irresponsible, [but] it is illegal and will be treated as such,” Green said.