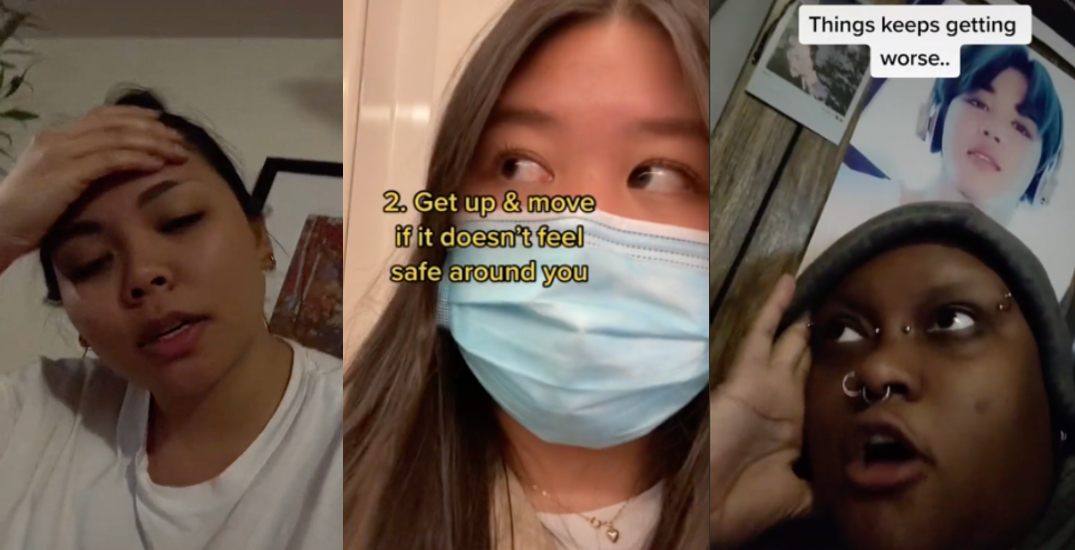 Editor’s note: This article mentions and discusses incidents of violence against women.

With violent attacks seemingly seeing a major spike in the city’s public transit network, some Toronto women are afraid to leave their homes and board the TTC.

On Friday afternoon, a man doused a woman with a flammable liquid and set her ablaze at Kipling Station, one of the city’s busiest stops. Her condition is unknown but she is recovering.

In April, a Black Muslim woman was pushed onto the subway tracks at Toronto’s Bloor-Yonge station. The TTC blamed her for standing too close to the tracks.

In February, a man was arrested for assault after spitting on a woman twice on the westbound subway train coming from Broadway Station.

In January, another woman was stabbed in the shoulder by a man completely unprovoked while on a TTC bus in the Queen Street West and Tecumseth Street area. She needed stitches.

Toronto’s transit agency maintains that these incidents are “isolated” or “random” and do not pose a threat to the public, but the women of Toronto are wary and terrified.

On Friday, TikToker @flourchildTO posted a video about her walk to the TTC after hearing about the immolation incident at Kipling Station.

She may not have expected the response it was going to get.

“So it’s either I spend $200 to get not even a full tank of gas, or take the TTC and potentially get lit on fire,” said a commenter under @flourchildTO’s video. “Love this city.”

The video has been viewed almost half a million times and has prompted other women in the city to post videos and comments talking about the fear they experience on the TTC.

Many are reporting attacks they or the women they know have endured.

“Honestly, the streets of Toronto and especially the TTC do not feel safe for women right now,” said Toronto-based TikToker @kat1981.

She shared that a random man called her a b*tch and spat in her face while she was on the TTC around two months ago, and her friend was also punched in the face while walking home.

“Someone grabbed my coffee and threw it on me outside the TTC,” commented Sandy, under Kat’s video.

“I got attacked by a man with a HAMMER a few months ago on TTC,” said Lyssa under the same video. “I was wearing scrubs & just came from work at the hospital?? I really don’t get ppl.”

“About a month or so back I was getting off at King Station and a man grabbed me and slammed [me] into a wall,” added Dana.

“Last month, a man on the TTC tried to light my hair on fire at St. Patrick Station and literally only one person helped me,” reported Linda Sinclair, another Toronto resident.

The video posted by @flourchildTO was reshared by multiple Torontonians, one of whom is TikToker @starcasters, who is visibly upset and angry about the situation.

@starcasters #stitch with @flourchildto so much more to say. But i hope everyone stays safe and just look out for each other. Smfh #fyp #fypシ #toronto #starcasters ♬ original sound – starcasters

“We shouldn’t feel like we have to be on edge every time we’re setting foot on the f*cking TTC,” @starcasters said.

Another Toronto resident, Shan, aka @_bearcrab on TikTok, narrated the racist verbal attack she experienced on the train. A man kept yelling a racial slur at her until she got off the train.

“No one did sh*t,” she complained, adding that she had a panic attack at work following the incident.

Women are opting to take ride-sharing services like Uber and Lyft to avoid the TTC, but highlighting how much of a toll this safer option can take on their finances.

“Our tax dollars go towards keeping our city safe, and as a woman, I don’t feel much safer,” said downtown Toronto resident @melrollingstone in a video. “So my question to all of you is, do we continue to pay out of pocket just so that we can live our lives and feel safe, or do we continue to scream into the void and witness these incidents occurring over and over in the news?”

Women are also sharing tips for a safer TTC ride, such as standing with your back flush against the wall while waiting for your train and taking off your earphones if you feel unsafe.

In a two-part TTC safety TikTok, Torontonian Laura Nguyen shared 10 tips, including one where she advises wearing your hair down if you have long hair to prevent someone from pulling on your ponytail.

But many wonder how long the onus will lie on victims and not on the system or the perpetrators.