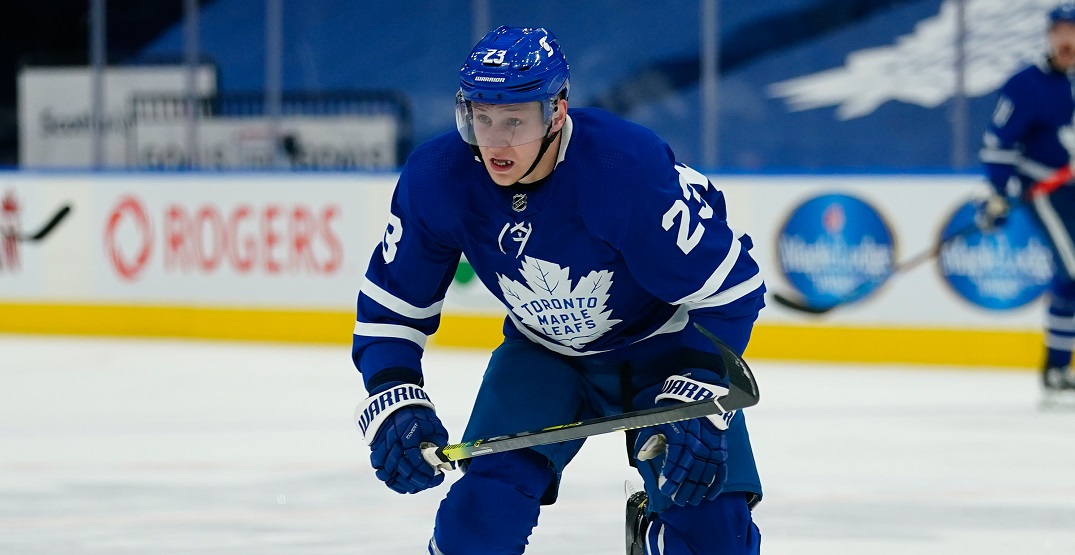 Travis Dermott appears to be back in the fold for the Toronto Maple Leafs.

On Thursday, the team announced that the defenseman has signed a two-year deal, with the annual average value (AAV) of the contract being slated at $1.5 million.

Toronto originally took Dermott in the second round (34th overall) of the 2015 NHL Entry Draft from the OHL’s Erie Otters.

During his time in Toronto, Dermott has picked up 47 points (11 goals, 36 assists) in 208 regular-season games.

This past season Dermott played in 51 of 56 regular-season games but was in the lineup for just three of the Leafs’ seven playoff games against the Montreal Canadiens.

Dermott is an intriguing case study of a young defenseman. He has several raw abilities and can be a menace on the puck, but leaves much to be desired on the offensive front.

Travis Dermott, signed 2x$1.5M by TOR, has always had quite strong results despite never really gaining the trust of his coaches. His aggressiveness has consistently prevented scoring chances against even if it occasionally leads to a regrettable turnover. #LeafsForever pic.twitter.com/rfOatEdllB

This past year in his first full season under Leafs head coach Sheldon Keefe, Dermott had just a little over 13 minutes of ice time a night, the lowest mark of his four-year NHL career.

Another curiosity about his time in Toronto is that Dermott has never really been given much of an opportunity on either of the Leafs’ power play or the penalty kill units.

Still, it appears to be a sensible signing for the Leafs – at age 24, Dermott still has room to grow into a top-4 role, and the Leafs are not exactly shelling out any sort of massive commitment to the player in term or dollar amounts.

Dermott’s contract comes ahead of speculation that he may be exposed to the Seattle Kraken in the expansion draft later this month. Teams are expected to submit their protection lists by July 17.