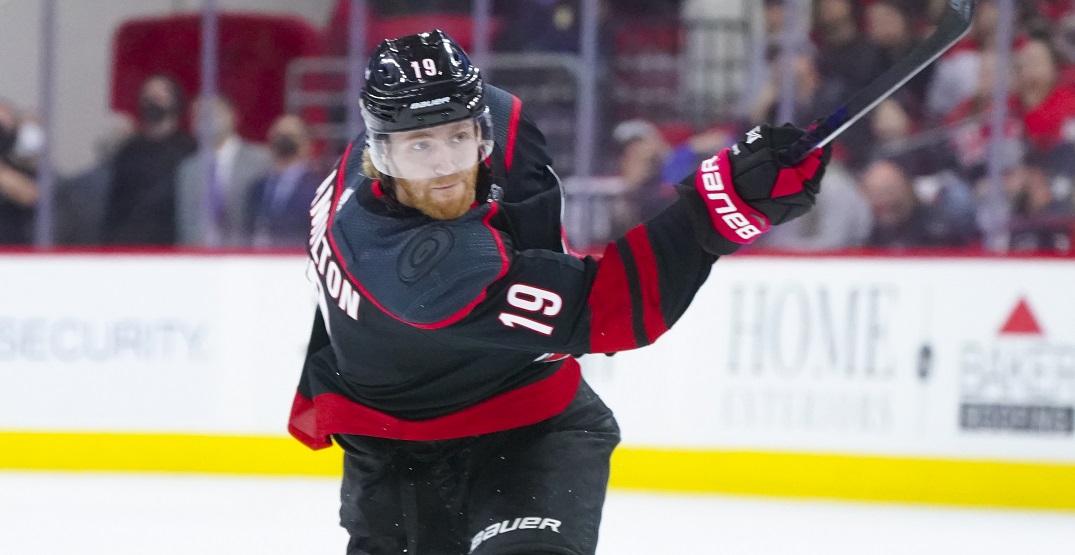 Sportsnet’s Elliotte Friedman reported on Monday that the 27-year-old was given permission by the Carolina Hurricanes to speak to other NHL teams in the pre-free agency period as his six-year contract, originally signed by Calgary, is set to expire this offseason.

A sign the off-season is really revving up as the final four chase the Stanley Cup: Carolina has given Dougie Hamilton permission to talk to other NHL teams. Opens potential for a sign-and-trade.

He could stay in Carolina, but the door is open for other teams to present their case.

For the Toronto Maple Leafs, they need to be doing everything they can to position themselves make the push to land a defenceman of Hamilton’s calibre.

The Leafs don’t have the kind of money to pay $11.5 million to spend on defence for a player like Erik Karlsson’s mega-deal in San Jose. But to get a stud d-man for $7.5 or 8 million? It could make more sense than you think. CapFriendly projects the Leafs with around $12.5 million in cap space right now. It would require some creativity to land Hamilton long term. But that doesn’t mean they shouldn’t do it.

Toronto had a lot Ontario-born players this past season: offensive stars like Mitch Marner and John Tavares, veteran depth like Joe Thornton and Wayne Simmonds, and gritty fan favourites like TJ Brodie and Zach Hyman. It didn’t work out.

Is that really why they failed, though? Or was it some weird combination of dumb luck, poor injury timing and an inability to score when it mattered most?

Dougie Hamilton, with all he brings, could be a little mix of what everybody likes.

Born in Toronto, Hamilton was originally selected via a draft pick traded to Boston from Toronto in the Phil Kessel trade.

He was on the infamous 2013 Boston roster that toppled the Leafs in that Game 7, and spent three seasons with the Bruins before being moved to Calgary for a trio of draft picks in summer 2015 as an RFA.

Three years after landing in Calgary, Hamilton was involved in another major transaction that saw him flipped to Carolina (along with Adam Fox and Micheal Ferland) for Elias Lindholm and Noah Hanifin.

Hamilton’s 22:43 average time on ice this season was just 16 seconds behind Hurricanes leader Jaccob Slavin. For all intents and purposes, though, he really is a true No. 1 defenceman, whether you’re looking at the advanced stats (like below) or watching his game night in and night out.

One thing about Hamilton is he’s not just a “stats darling” anymore. Unlike a few other “hidden” value D-men, Hamilton is more or less a known quantity – at least per our contract model. Among this offseason’s FA class, his 7 year ~$8.5M projection is the highest for a UFA D.

For whatever reason, Hamilton has struggled to last anywhere long-term. But with the chance to sign his one major payday in the NHL (with EvolvingWild’s model projecting nearly a $60 million contract), trying to win with his childhood team in Toronto could be a dream come true for everyone involved.

It’s a tired narrative for some, but the Leafs do keep signing and drafting local talent. As long as he’s interested (and you can assume the team will be at least considering him), there’s no good reason why Hamilton can’t be the next Leafs’ splash.

Wherever he signs, the projected contract of Hamilton will be a big one, no doubt.

Find the talent first, and worry about where exactly he fits in the lineup later.

If he makes it to market, Hamilton will an unrestricted free agent for the first time in his career. Instead of wondering why the Leafs might not be able to make a big splash once again, let’s break down the reasons why that could actually make a ton of sense for both team and player.

Friedman also speculated today that a sign-and-trade could be possible.

The other thing this does: allows Hamilton to see if the Hurricanes do make the best offer for him…potentially allowing for a return if he doesn’t like what he sees out there. Very interesting manoeuvre by team and player

It’s hard to imagine such a thing happening, unless he wanted an eight-year deal to play somewhere else rather than the maximum of seven he could get on the free agent market due to the CBA.

From a preventative standpoint, the Leafs’ defence was about as strong as it’s been in the last two decades this past season. Their 27.82 shots against per game was the team’s lowest mark since 2003-04.

But they didn’t really score. No defenceman scored more than five goals for the Leafs this season, with Morgan Rielly leading the way. Hamilton’s had at least 12 goals each of the last six years.

For Hamilton, it could actually be a Rielly departure that creates the necessary cap space to make it happen. Rielly has just one year left on his deal at $5 million per year. With just a modified no-trade clause, Leafs’ GM Kyle Dubas could say goodbye to a player like Rielly if he thinks the fit for a talent like Hamilton is there.

If they want to be creative with the rest of their roster, the Leafs could sign Hamilton. Whether they do is a whole different question.