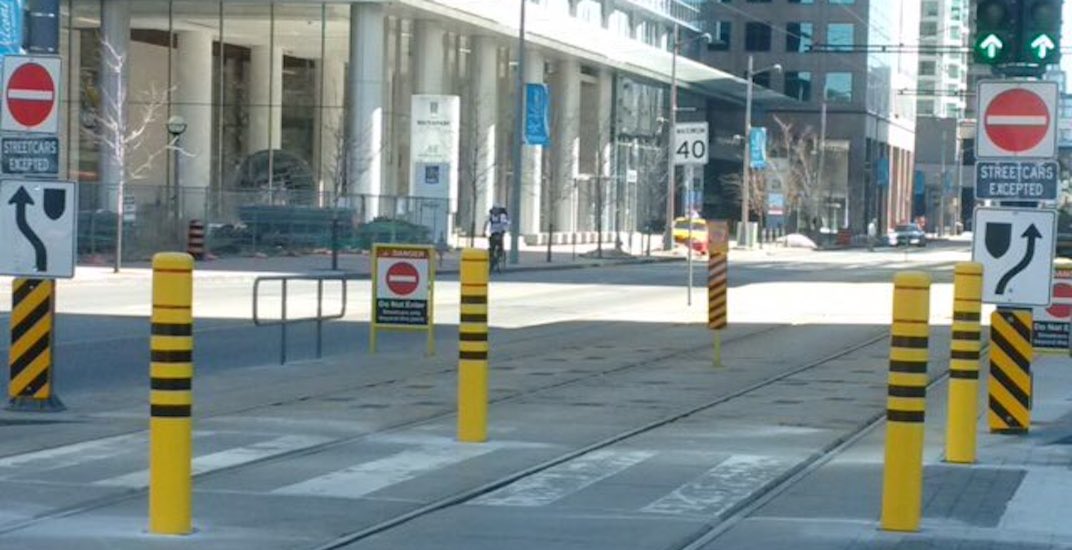 Following far too many confused drivers driving into the Queens Quay streetcar tunnel, the TTC has taken more steps to hopefully put a stop to it.

According to TTC spokesperson Brad Ross, additional bollards, which are black and yellow traffic poles, were installed over the weekend at York and Queen’s Quay.

He added that the new bollards should make it even more obvious that “streetcar tracks are a no-go zone for autos.”

Additional bollards were installed this weekend at York and Queen’s Quay to make it that much more obvious that the streetcar tracks are a no-go zone for autos. A lift gate closer to the tunnel will be installed in the coming weeks. pic.twitter.com/QXAktpIiNY

The additional bollards are the latest measure put in place by the TTC to put a stop to the problem.

According to Ross, the TTC has already added bollards, warning lights, signs, rumble strips and raised track, which clearly isn’t enough to combat the problem.

Despite bollards, signs, rumble strips, flashing lights and raised track, some still manage to drive their cars down the Queens Quay streetcar portal, though mostly on weekends and in the middle of the night. Enough. The TTC will now be installing a gate mechanism.

In addition to the new bollards, the transit agency is planning to install a lift gate closer to the tunnel that would only allow streetcars to pass.

Whenever an automobile gets stuck, it can take hours to extricate the vehicle, which can extremely disrupt streetcar services.

Hopefully, these new measures will help put a stop to drivers carelessly entering the tunnel.