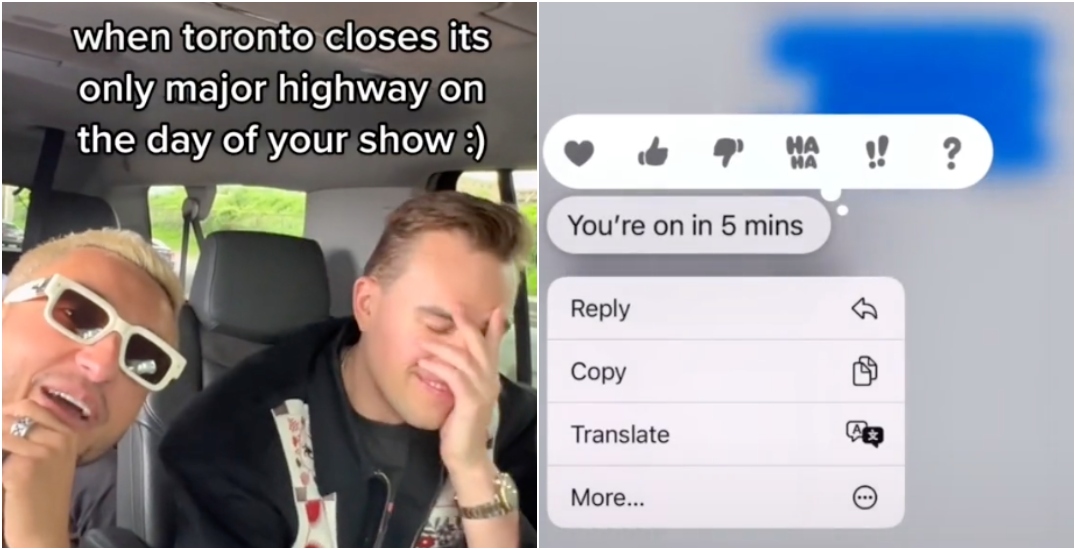 Running late for a concert is stressful enough but what if you were the main act?

That’s exactly what happened to the LA-based Canadian DJ duo Loud Luxury last weekend when they found themselves sitting in standstill traffic in downtown Toronto moments before their scheduled appearance.

“This is somehow Doug Ford’s fault,” stated the caption.

Andrew Fedyk and Joe De Paceva, known for tracks like “Body” and the remix of “Scared to Be Lonely,” were slated to perform on Sunday, June 5 at Cabana Pool Bar at 11 Polson Street. In the video, the pair can be seen looking stressed as they wait in the car on Lake Shore Boulevard, mere minutes from the venue.

However, according to Google Maps, the short drive was going to take 54 minutes. The problem: they were on in five minutes.

But like the true pros that they are, De Paceva and Fedyk take matters into their own hands. They both hopped out of the car and dashed between the cars towards the venue.

The duo got quite the pre-show warm-up upon reaching Cabana Pool Bar where they were quickly escorted onto the stage.

Fans got a kick out of the unexpected behind-the-scenes clip.

“It’s the Captain Jack Sparrow run for me,” wrote one commenter.

“The Jack Sparrow run is sending me 💀💀,” stated another.

It appears that it all worked out and Loud Luxury was only a few minutes late for the show. As for their next Canadian stop, they’re scheduled to perform on June 17 at New City Gas in Montreal and will likely leave for the venue a lot earlier.