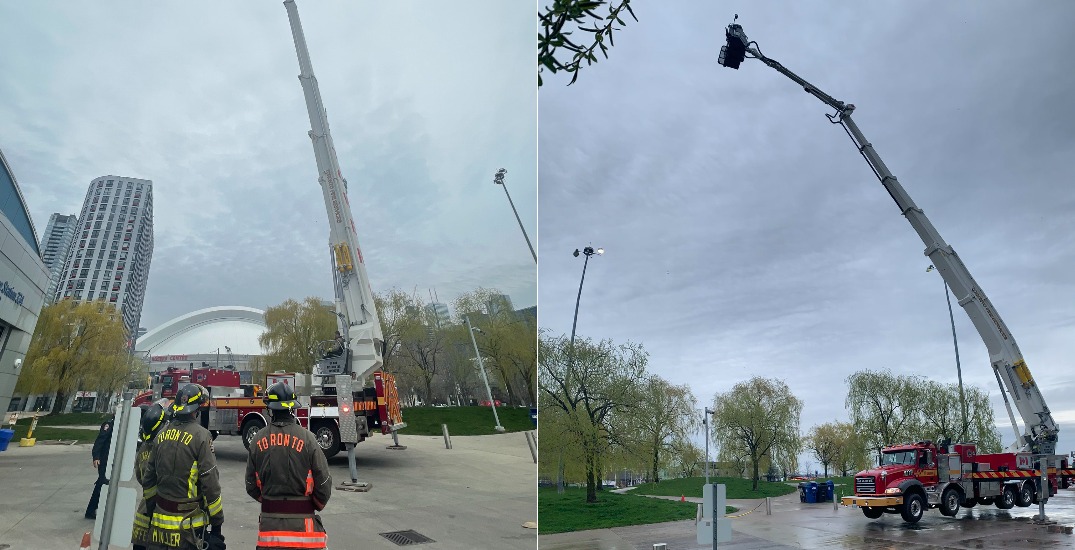 The new firefighting articulated aerial unit can extend 70 metres from the ground or 22 storeys. The Bronto Skylift, also known as Tower 1, is twice as tall as the next highest aerial unit, which comes in at 11 storeys. According to the City, this is the tallest firefighting apparatus in North America.

It’s no secret that Toronto’s getting taller – just look at the downtown skyline and cranes at work.

The truck will be kept at 339 Queens Quay West, where there are a great number of highrise condo buildings. It can be deployed to other areas of the city and could even be used to assist rescues at Scarborough Bluffs, fighting fires, and industrial rescues.

The huge platform also has a nozzle that can push water through at 3,800 metres per minute! According to the City, this 22-storey apparatus will also allow firefighters to get above fires and operate from a different vantage point. It can also help fire teams get above and around obstacles.

Wondering about the view from the top of a 70 metre articulating firefighting aerial platform? This is the view at the 60 metre mark from the platform of @Toronto_Fire Tower 1. @TPFFA pic.twitter.com/WAqiHUE6Tp

“The addition of this 70-metre articulating aerial platform into Toronto Fire Services fleet represents a significant enhancement to the already world-class levels of fire protection services provided in Canada’s largest and most diverse city. This resource will become even more important as Toronto continues to become increasingly vertical and dense in the years to come,” Fire Chief Matthew Pegg said in a press release.