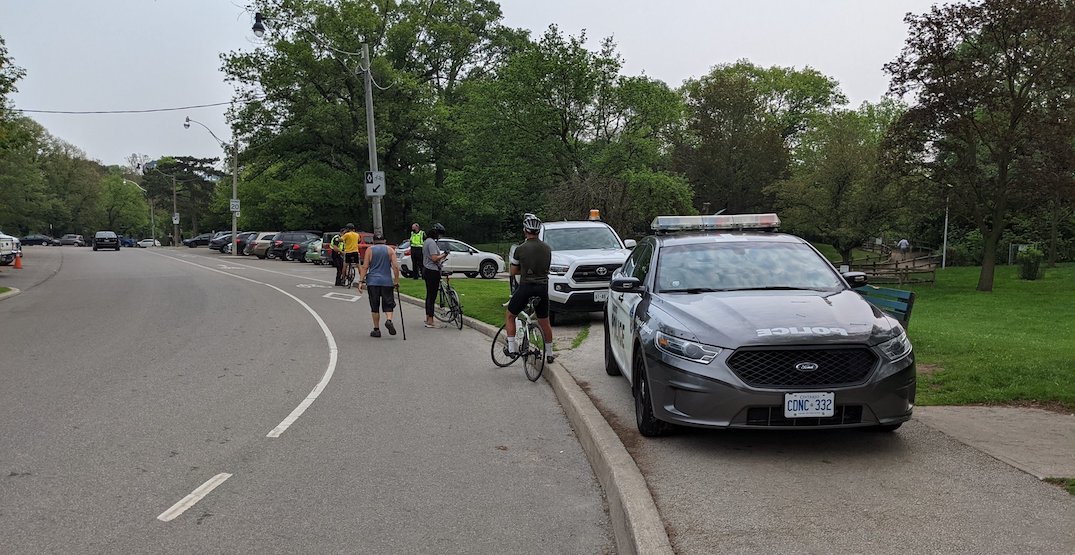 Dozens of cyclists speeding through High Park last week were slapped with $125 tickets by Toronto police.

The City of Toronto and Toronto Police Service (TPS) carried out a joint enforcement blitz on July 19 and 20 to target both cyclists and drivers travelling above the 20 km/h speed limit in the western park.

“Community officers and the City of Toronto have received a significant number of complaints regarding cyclists and vehicles travelling at speed in High Park,” a TPS spokesperson told Daily Hive. “The park has become busier as COVID restrictions lift and the weather warms up, resulting in more families, young children and dog walkers who have all raised concerns.”

Watch out riders. Police are ticketing cyclists for speeding above 20km/h in high park. #biketo pic.twitter.com/9O1DfGjh4a

According to the City, concerns were also raised over cars and bikes blowing past stop signs.

Over the two-day period, 62 tickets were issued to cyclists and 64 to drivers for speeding and failing to stop at stop signs. All of the fines had the $125 price tag.

“Enforcement is just [one] way the City and TPS are tackling speeding issues with cyclists and vehicles in High Park,” a City spokesperson told Daily Hive.

“Education and mitigation strategies have also been implemented, including educating people about the speed limit, painting speed limits on roadways, and erecting fencing to slow cyclists down at points during the Cherry Blossom closure.”