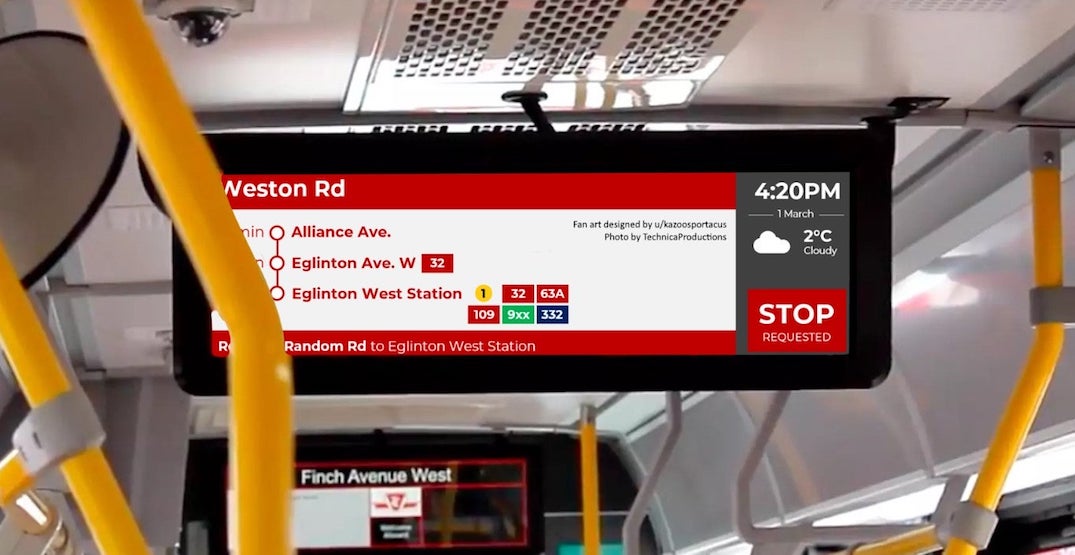 Everyone has their own complaints when it comes to TTC service, but one Reddit user took it upon themselves to come up with a solution to their bus woes.

The Redditor, who goes by the name kazoosportacus, has been workshopping a possible new, clearer TTC bus screen for a few months now and, on Monday, released an animated version with accompanying audio.

The proposed screen design would display the next two stops, how long it will take to get to each of them, and what connections are available there. It would also have the name of the route clearly displayed in a large bar across the bottom, and on the right side of the screen would be the time and weather.

Kazoosportacus originally posted a mockup of their proposed design earlier this year that included a preview of the next three stops, rather than two, and after receiving feedback from the online community, the design was refined.

Other Redditors responded with overwhelming positivity to the proposed screen design, saying that it looked clean and informative. One person even jokingly added,  “This makes too much sense. Will never work.” Others pointed out that it was a significant step up from the current TTC screens, which use up valuable space for the TTC logo and a “Welcome aboard” message.

If the TTC were to implement the proposed Reddit design, it could only serve to improve people’s transit experiences.