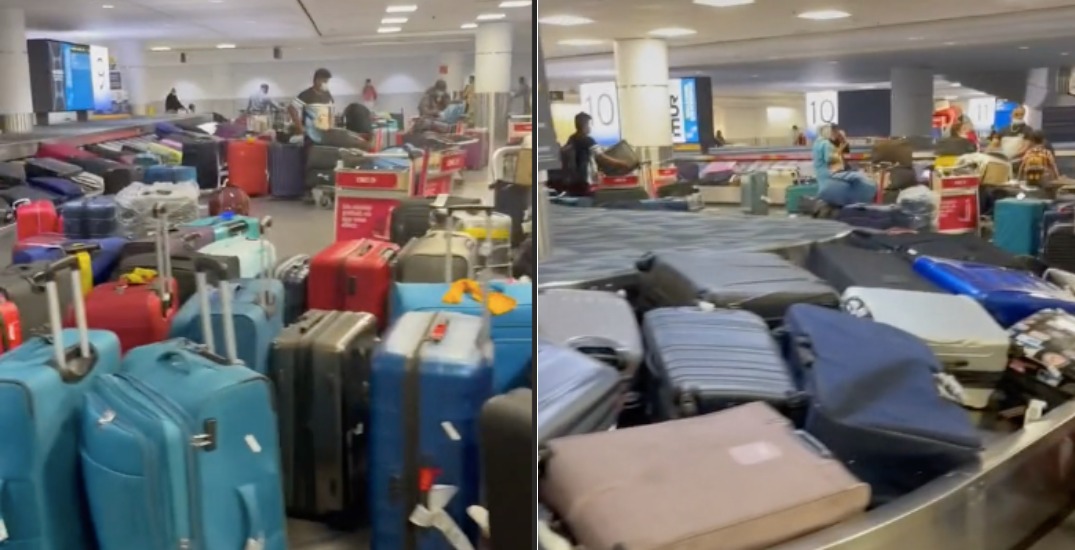 Travel delays in recent weeks have plagued Toronto Pearson — Canada’s biggest and busiest airport — and now there appears to be chaos in the baggage claim.

The videos, shared by user @tano0069, depict his arrival at Toronto Pearson’s baggage claim. In between and on the baggage carousels, bags can be seen clogging up the conveyor belt.

The Greater Toronto Airport Authority, which operates Toronto Pearson, told Daily Hive in an email that airlines and their hired on-the-ground handlers are responsible for unloading luggage from planes.

“Baggage handling, including removing from aircraft, putting into the baggage system and the rate at which bags are put onto a baggage carousel, is the responsibility of the airline and their contracted ground handling company,” a spokesperson said.

They added that in the event of a backlog, like the one shown in the TikTok videos, they work with airlines to move luggage off of the carousels to free them up for other flights.

We know delays are frustrating. We feel it, too. Our airport workers are doing their best to help you reach your destination and a little kindness goes a long way. Please be respectful with frontline workers—threats and abusive language are not tolerated. https://t.co/HObfaTpHyk pic.twitter.com/9dqu9zvleu

The TikTok video isn’t the only example of major backlog at baggage claim. A Twitter user shared a video of what it was like going through on May 9.

While we’re at it, this is @TorontoPearson on Friday night. After being held on out @airtransat flight for nearly 3 hours with a baby, this is a fraction of the bags in baggage claim. @airtransat told me they are throwing my missing bag in the garbage if I don’t pick it up asap. pic.twitter.com/WPkdEXuada

Passengers have taken to Twitter to talk about baggage delays with some saying they’ve waited nearly two hours for their luggage.

Been waiting 3.5 hours for baggage in #Toronto @TorontoPearson and people are pissed! It’s almost 1 am and cops had to be called down to settle people down. Meanwhile @AirCanada has no clue what’s going on! #shitshow! pic.twitter.com/2gr6ggmPli

@TorontoPearson if you can’t get the luggage to arrive in a timely manner then howsabout putting some fricking seating in the domestic arrivals baggage area in T1???
First time flying since the pandemic… you had 2 years to make this better! #fail

Last week, business leaders in Toronto called upon the federal government to lift the remaining COVID-19 travel restrictions in an effort to speed up wait times at the airport. They said that the delays passengers are facing could deter people from coming back, which would negatively impact Toronto’s economic recovery.