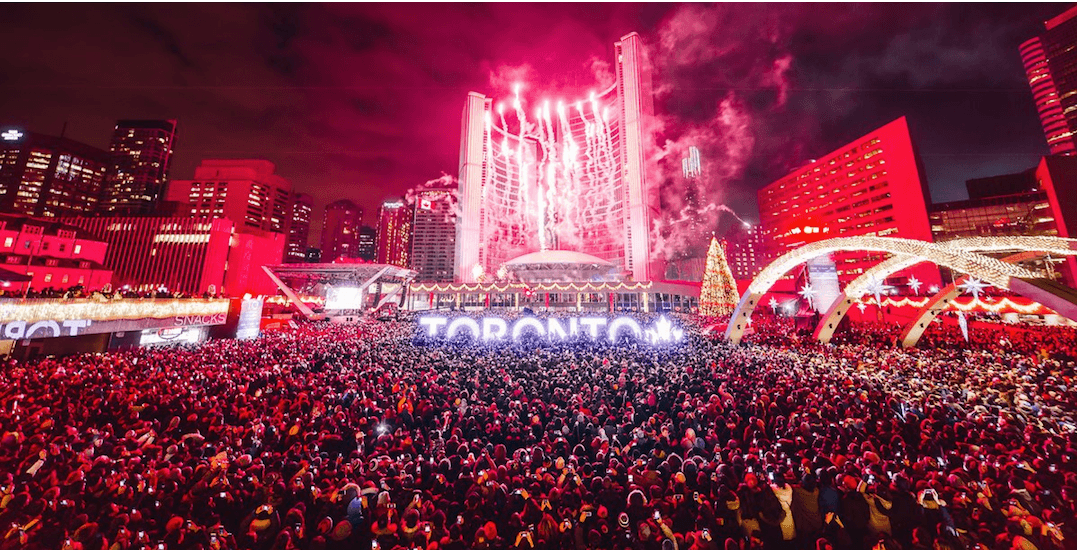 Well, you’ve officially made it!

It’s finally the countdown to the end of 2017, and to make sure you end it right we’ve rounded up plenty of fun things to do in Toronto all weekend long.

From your New Year’s Eve party to where to go for dinner and everything in between, here are your top events from December 29 to 31.

Have a great New Year, Toronto!

What: Come explore the brilliance behind Christian Dior’s dramatic designs that revived the Paris haute couture industry following the Second World War at the ROM’s latest exhibit, which officially begins this Saturday.

What: The 1993 classic thriller will be hitting the big screens in Toronto this winter for a very special performance with the Motion Picture Symphony Orchestra.

When: December 29, 7:30 pm
Where: Sony Centre for the Performing Arts, 1 Front Street East

What: End the work week by dancing the night away to one of the OGs of house music, Eric Prydz. He’ll be playing a set at REBEL alongside his labelmate Cristoph.

A Glow in the Dark Paint Party

Paint, Drink, Create the night away with DJ REC and DJ GadJet spinning live with 90s’ R&B and House music. A little something for everyone!

What: Did Santa miss the mark this year? Worry not! Skittles Holiday Pawn Shop wraps up this Friday, offering Torontonians a chance to trade colourful candies for unwanted ugly sweaters, thoughtless secret Santa gifts, and presents from family members that make you wonder, “How are we even related?”

What: Toronto’s hottest skating party returns this Saturday, with a special DJ set from Luxelife Sound. The best part? There’s no guest list, no dress code, and no cover. So lace ’em up, and head on down.

When: December 31, NYE exclusive dinner begins at 7 pm and the regular party runs from 9 pm to 2 am
Where:  100 Queens Park

What: Nathan Phillips Square is hosting a massive New Year’s Eve celebration to ring in 2018. The final send-off to the year-long celebration of Canada’s 150th birthday will kick off at 8 pm at Toronto’s City Hall and will include an exhilarating evening of entertainment with dynamic DJs, live electronic music, site animations, a DJ skating party sponsored by Tim Horton’s and a stunning fireworks display at midnight.

What: The brewery’s final send-off to the year will feature an epic house party in The Roundhouse, complete with themed rooms, DJs, live karaoke and plenty of Pilsner to ring in the New Year with your closest friends.

What: Ring in the new year as you experience the Aquarium in a whole new way, as the aquarium’s first ever New Year’s party is sure to get your glittery gills flapping. This 19+ event will feature hors d’oeuvres by Daniel et Daniel, music by DJ Shamz, and full bars located throughout the galleries.

What: It’s a good ol’ fashioned high school NYE house party, and you’re invited. Trashy high school-style décor, red solo cups full of your favourite Grade 9 elixirs (and also other more grown-up elixirs), complimentary Jell-O shots at midnight, and DJ Brains4Brkfst playing nostalgic guilty pleasures all night long. There will also be free bocce ball and shuffleboard from start to finish, plus a lane of Bucket Ball… which is sort of like Giant Beer Pong.

What: This NYE, Mascot and Odd Thomas are teaming up to host two distinctive yet complimentary vibes for partygoers. On the main floor, you can enjoy a three-course prix fixe dinner prepared by Chef Jon Williams in addition to craft beers and cocktails. Upstairs you’ll find a wild dance party, where the drinks will be flowing and the beats bumping.

What: The sixth annual Dude’s New Year’s event featuring The Big Lebowski is back. The Dude, Walter, Donny and the gang are back for another round of White Russians, Creedence and unforgettable hijinks. Hundreds of “Little Achievers” will ring in the New Year in style, and yes, sunglasses and bathrobes are recommended. Your ticket includes the movie screening, one drink, popcorn and party favours.

What: Ring in the New Year with everyone’s favourite Toronto band, Dwayne Gretzky! They’ve secured the largest dance floor we could find and partnered with Young Offenders to transform the Enercare Centre into a reflective palace filled with art installations, food, photo ops and surprise moments as you reflect on the past and slide into 2018.

What: Northern Maverick Brewing Co. is heating things up this NYE with its Fire & Ice New Year’s Eve bash. Complete with a fire flair bartending show, double ice shot luge sculptures, a delicious four-course meal, and a live DJ, this is definitely going to be a hotspot on December 31.

What: Each room of the chateau will feature different events and attractions, with the East Wing hosting aerialists, a martini station, and live entertainment. Toronto’s very own Dzeko will be taking over the West Wing, hosting more of a club-type atmosphere similar to what you might find in Las Vegas.

NYE at the Oakville Conference Centre

What: If you want to avoid the chaos of downtown, but still have the opportunity to get dressed up to ring in the New Year, you may want to head to Oakville. The Oakville Conference Centre will be hosting a lavish NYE soiree complete with a four-course dinner and party beneath the sprawling 20-foot ceilings in the main ballroom. Various dietary options are available, as is the option to choose a late night menu.

What: King Street is definitely the place to be, especially on New Year’s Eve. Redline & Friends are coming together to bring you a New Year’s Eve to remember at Bloke, Toronto’s premier nightlife destination. Grab your friends, choose from one of the many table packages, and celebrate at one of the hottest venues on King Street.

What: Get dressed up in your finest and head to Mercer Street’s very own Buonanotte. Here you can ring in the New Year in style as you enjoy a midnight champagne toast and the hottest music from Jeff Jam.

Black and White Ball NYE at the Thompson Hotel

What: Rub shoulders with some of Toronto’s elite as you dance the night away. The party kicks off at 9 pm and will include a candy and snack bar, party favours, lobby bar and rooftop lounge access, entertainment and a midnight champagne toast. There will be a dress code in effect, and all guests are asked to wear black and white.

What: 2017 has come and gone, which means it’s time to celebrate in style and with good music. Partygoers at Stones Place will transcend time as DJ Bush plays hit after hit of classic 50s, 60s, 70s and 80s rock, soul, and pop.

What: Amsterdam Brew House will be transformed into an epic 1920s’ prohibition party. Guests can enjoy an epic 1,000-balloon drop at midnight, live entertainers, a complimentary bubbly toast, New Year’s noisemakers, and more. Dress to impress.