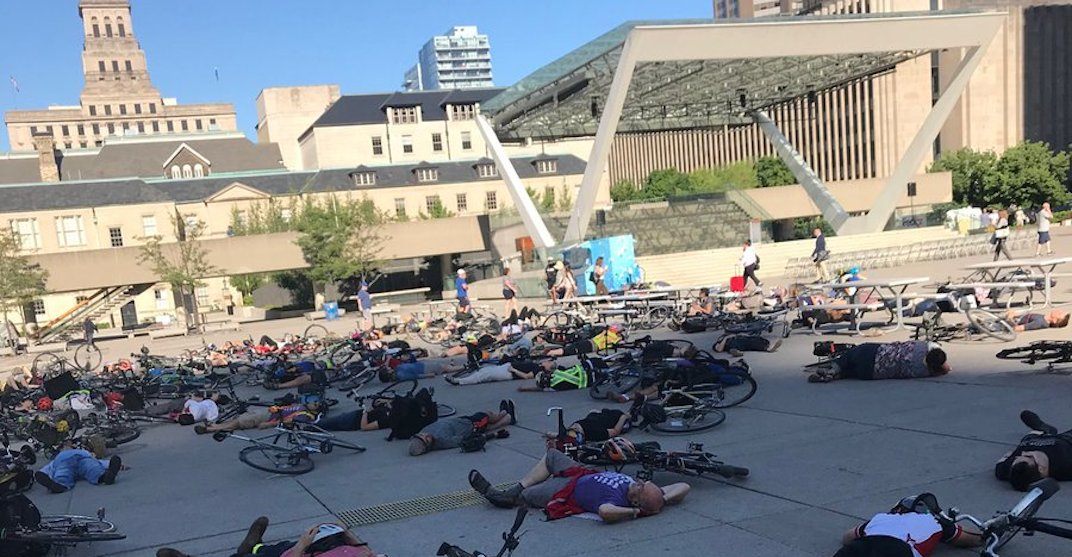 Following the recent rise in pedestrian and cyclist deaths on city streets, Toronto residents have had enough.

Friday morning, cyclists staged a mass die-in at Nathan Phillips Square to demand an end to road fatalities of vulnerable riders in Toronto and to mourn the pedestrians and cyclists who lost their lives too soon.

Already this week, two people have been killed on Toronto streets including a cyclist who was fatally hit by a flatbed truck near the Annex and a pedestrian who was killed after being struck by a pick-up truck in the Eglinton West area.

Cyclists took to Twitter to call out Mayor John Tory about the lack of protection on city streets and to take cycling infrastructure more seriously.

From the images shared on social media, dozens of cyclists showed up to the die-in, which took place just hours before Mayor Tory is scheduled to speak to the press about Thursday evening’s gun violence and to provide an update on the city’s Vision Zero Road Safety plan.

At the bike die in. Vision zero failure must be a core election issue #bikeTO pic.twitter.com/y5iP8ygier

Today at City Hall: Cyclist die-in to demand an end to deaths on our streets. No more thoughts and prayers, we demand better policy and infrastructure. #bikeTO #VisionZero #TOpoli pic.twitter.com/ncGxMlUWKp

Participating in this morning’s die-in at #NathanPhillipsSquare to protest the continuing rise in pedestrian and cyclist deaths on #Toronto‘s roads. It’s time #TOpoli and @JohnTory took action to end this senseless killing. #WalkTO #BikeTO #VisionZeroTO pic.twitter.com/fu3lEriHMT

Photos from the Toronto Die-In this morning via @PatrickBrownLLB. There have been 93 pedestrian/cyclist deaths on the streets of Toronto since Vision Zero was implemented two years ago. #ZeroMeansZero pic.twitter.com/gWxBv7dhjG