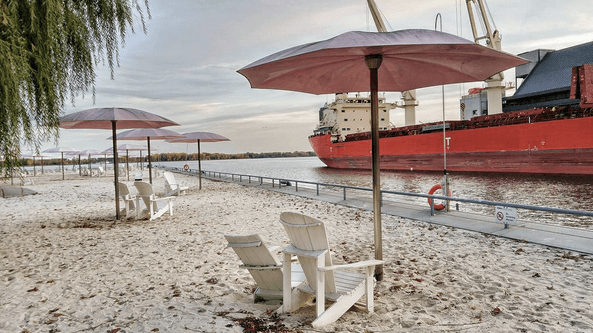 It’s daylight savings this weekend, which means -almost- officially winter. But the sun is continuing to shine, so take advantage and check out these awesome events in Toronto this weekend. Just because it’s dark early, doesn’t mean the fun stops.

Start off the weekend with some FREE ‘Za. Delisso pizza is hosting a week-long pizza party in Toronto. Launching todya, the Toronto pop up pizzeria will promote a new line of Rustico pizzas and will be dishing out FREE, fully customizable pies.

The Craft Beer Awards are back at the Royal Winter Fair, and at a new location. The Ring of Excellence! Sip, sample and celebrate some of the best craft beers from across Canada. One night only!

Saddle up! With music to get your feet stomping, join the ROM’s Friday Night Live when country comes to the city. Yeeee-hawww!

Where: The Royal Ontario Museum, 100 Queen’s Park
When: November 4 at 7 pm

Detroit’s Danny Brown is no stranger in today’s hip hop scene. From touring with A$AP Rocky, to his tracks like “When It Rain” – from his yet-untitled new record- Brown continues to build his fan base. It will be no surprise if he is hip hop’s next massive thing.

Where: The Phoenix Concert Theatre, 410 Sherbourne Street
When: November 4 at 8 pm

Juno Award-winners Arkells recently announced their 2017 tour, which stops at Hamilton – their hometown. But this weekend, the guys will be at Massey Hall with Frank Turner & The Sleeping Souls. The band is touring their fourth and latest studio album Morning Report, which includes their chart-topping single “Private School.”

Rendezvous with Madness Film Festival is a signature event of Workman Arts, produced annually in Toronto since 1993. The first festival of its kind in the world, the Festival investigates the facts and mythologies surrounding mental illness and addiction as presented by both Canadian and international filmmakers, as well as by visual and media-based artists. The festival provides filmmakers and artists with opportunities to exhibit work that may not otherwise be seen; facilitates discussion between artists and audiences on these cinematic and media representations; and increases awareness of, and advocacy for, mental health and addiction issues among the broader public.

Where: Various venues
When: November 4 to 12

The Craft Ontario Craft Show exists to share craft culture with the public, to expand understanding and interpretation of contemporary craft and encourage the public to purchase craft and understand its value in the community.

Where: Artscape Daniels Spectrum, 585 Dundas Street East
When: November 4 to 6

A film festival fully dedicated to Brazilian cinema! The Brazilian film production of recent years is being recognized everywhere for its quality and diversity. The Brazil Film Fest (BRAFF) showcases a selection of great movies from the new wave of Brazilian filmmaking, all taking place over four days in Toronto.

Where: TIFF Bell Lightbox, 350 King Street West
When: November 4 to 6

Listen up, fans of Iggy Pop and The Stooges! Gimme Danger is being screened for a limited time. Directed by Jim Jarmusch, this is a must see for music fans.

Where: TIFF Bell Lightbox, 350 King Street West
When: November 4 to 10

Where: Various venues
When: November 4 to 6

Where: Metro Toronto Convention Centre, South Building
When: November 4 to 6

Never a dull moment cheering on our Raps! Check out their Friday evening game against the Heat!

The Muslim Medical Association of Canada (U of T Chapter) and the Department of Psychiatry at the University of Toronto is hosting this conference, which will focus on mental health topics in the context of Islam and spirituality. Panel members will range from psychiatrists and therapists to spiritual leaders working in the field of mental health.

This totally free market will feature tons of vintage clothing and jewelry, home goods, books, toys, and so much more. Everything is free, but there is a limit of one small sized IKEA bag for each individual and a limit of two bags for families of three or more people.

Join Etsy for a day of music, shopping, local eats and good times. Etsy has rounded up 40 of Toronto’s primer and noteworthy makers, movers and shakers. Helping you beat the rush and get that holiday shopping done early. So grab the kids, bring a friend and meet your makers at the Etsy Team 416Hustler Holiday Market. Admission is FREE and all are welcome!

Chocolate Exhibitors will be on hand to showcase their product and services at this one-day showcase. Sample a variety of chocolates and partake in various events!

Where: Raiders E-Sports Centre, 49 St.Clair Avenue West
When: November 5 at 12pm to November 6th at 12pm (25 hours due to daylight savings)

The Society of Beer Drinking Ladies is BACK with Canada’s All Ladies Craft Beer Festival! Be a part of this historic and epic festival taking place at the beautiful Wychwood Barns.

Where: Artscape Wychwood Barns, 601 Christie Street
When: November 5 at 5 pm

Día de los Muertos (Day of the Dead) is a festival of reverence for those who have left the world of the living. Explore Mexico’s most popular cultural celebration through a contemporary lens, with live music, art installations, family activities and more.

Where: Harbourfront Centre, 235 Queens Quay West
When: November 5 to 6

Ex-Black Flag member, author, actor, motivational speaker Henry Rollins returns to Toronto this month. Rollins is trekking across North America, voicing his opinion on the state of the nation on the Spoken World Tour 2016.

Where: The Danforth Music Hall, 147 Danforth Ave.
When: November 5 at 7 pm

For the first time in history, Toronto’s catering kings and banjo brothers will come together for an unforgettable night of music, food and celebration. Union Duke provides the soundtrack and The Food Dudes provide the grub, creating a can’t miss spectacle of art and indulgence.

UK singer/songwriter Holly Lapsley Fletcher brings her haunting voice to Toronto this weekend. Following the successful release of her debut album Long Way Home, Lapsley has been on tour and the world sings along to her mega single “Station.”

Where: The Danforth Music Hall, 147 Danforth Ave.
When: November 6 at 7 pm