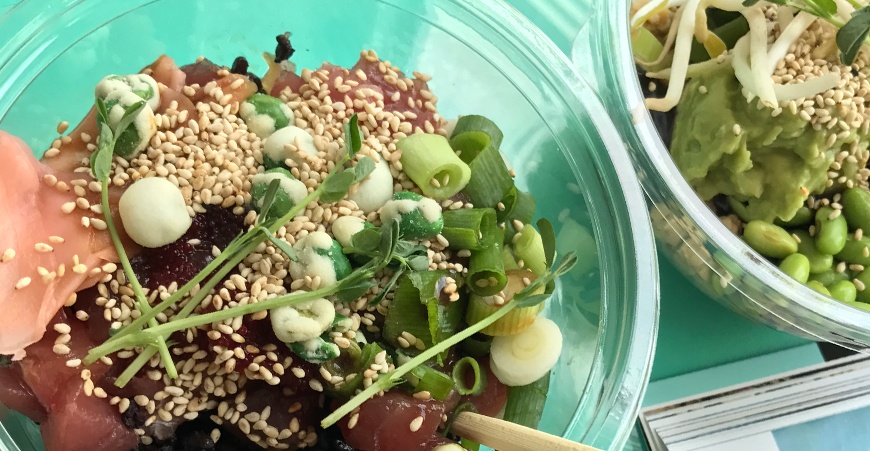 November in Toronto is going to be a delicious month packed with opportunities to catch celebrity chefs in town, support a good cause at food-focused fundraisers, and fill-up on everything from baked goods to poke.

Here are the top food events happening in Toronto this November.

Catch the celebrity chef on tour in Toronto promoting his new cookbook Appetites. The live show is billed as an “unyielding, brutally honest monologue” reflecting on street food, travels and culture, followed by an open Q&A session.

When: Tuesday, November 1
Where: Sony Centre for the Performing Arts, 1 Front Street East, Toronto
Price: $60 to $300

Eat your way through sweets and savoury culinary creations at 60 food stationed wo-manned by female chefs cooking in support of the Canadian Breast Cancer Foundation.

What’s on the Table

The 12th annual gala fundraiser for The Stop Community Food Centre will feature a dazzling array of edibles from dozens of Toronto’s top chefs in addition to wine pairings from Niagara vineyards and a live auction stocked with getaways and luxury items.

When: Wednesday, November 2, 7 pm
Where: Daniels Spectrum
Price: Every ticket purchased at $325 will receive a $230 charitable tax receipt

Pick up a poke passport and set out on to sample them all at seven participating poke shops in Toronto this month. Passport holders instantly gain access to one exclusive bowl priced at just $5 at each shop.

When: November 7 to 13
Where: Poke shops across Toronto
Price: $15 passports

Chefs Devan Rajkumar and Aleem Syed team up for a culinary journey through India that draws on modern day culinary inspirations, experiences and techniques while showcasing noble ingredients and ancient preparations from their homeland.

For two weeks only this November, Yorkville’s acclaimed French rotisserie will be showcasing the versatility of its Rotisol rotisserie by offering the ultimate four-course menu. Expect delicacies from the grill including lobster and celeriac roti, bacon-wrapped trout and dry-aged Cumbrae rib-eye.

Teams of four will compete in this hands-on pizza making competition presented by Queen Margherita Pizza and Creemore Springs. Assemble your own team or join a team the day of and make new friends while crafting pizzas to be judged by QMP’s head chef then follow along in professional tasting session led by Certified Cicerone Justin Lamontagne. Winners will receive Creemore Springs prizes, QMP gift cards and Pizzaiolo bragging rights.

Evening at the Market

Eat your way through St. Lawrence Market after hours. The inclusive evening in support of Second Harvest will feature food and drink from the Market’s 64 vendors.

This one-night-only night market from TABASCO and Canada’s Group of 7 Chefs will bring together an impressive roster of chefs for an evening of hot and spicy hawker market-inspired eats.

Mark your calendars for this bake sale showcasing an astounding assortment of seasonal sweets and treats from rising Toronto bakers.

Grab the whole mishpacha, Toronto’s first Jewish food festival is on mid-month and will feaute an afternoon of deli, knishes, hummus and other kosher-style soul foods from vendors like Pancer’s Original Deli and Schmaltz Appetizing.

In support of sustainable seafood, Ocean Wise challenges chefs to compete head-to-head for the title of Ocean Wise Chowder Chowdown Champion in cities across Canada this month. Attendees will have the opportunity to taste each chowder paired with local craft beers and vote for their favourite.

Sip and savour your way through international gourmet cuisine, exotic delicacies, wines, spirits, craft beers and more at this massive expo. Highlights of the program include tutored tastings, a chef stage showcasing cooking demos, plenty of sampling opportunities and more.

When: Thursday, November 17 to Sunday, November 20
Where: Metro Toronto Convention Centre
Price: Tickets are $15 in advance, $20 at the door

Chef Noah Goldberg serves up a “nose-to-tail” feast that would make Nona proud at this ticketed dinner in November. One the menu, bone marrow pizza, veal tongue fettuccini, sweetbreads with pearl barley, veal cheeks in truffle jus, and more.

The Revue Cinema screens Frankie & Johnny starring Al Pacino, Michelle Pfeiffer, and Nathan Lane this month. While watching the rom-com set in a New York City, a buffet will be accompanied by movie snacks from Mamakas Taverna.