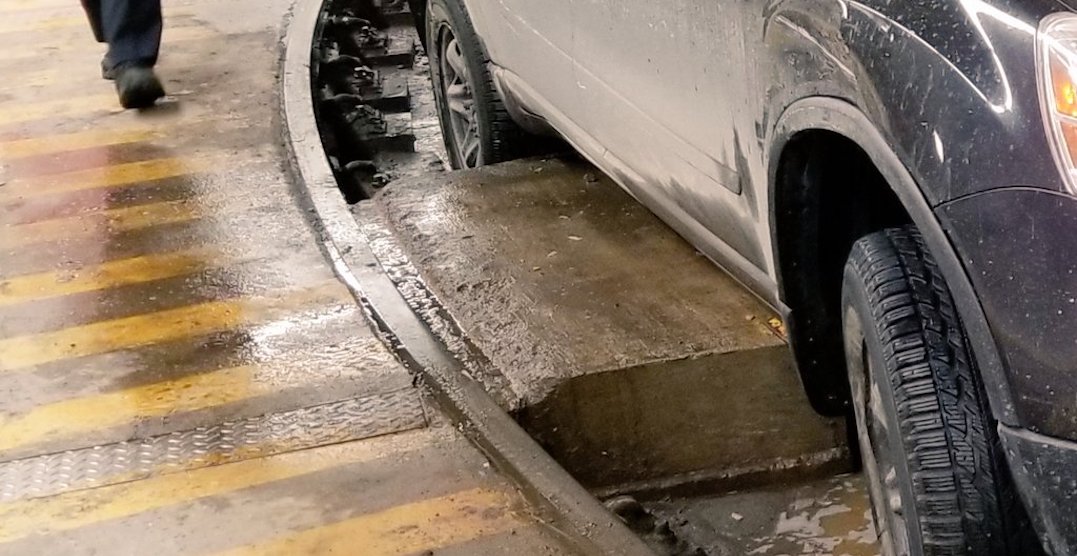 It’s been a whacky morning for the TTC.

While Line 2 dealt with a partial train derailment, downtown was facing its own set of issues in the wee hours of Wednesday morning, when an SUV got stuck in streetcar tracks just before 4:30 am.

The Queens Quay tunnel that leads into Union Station was blocked by a vehicle that, according to TTC’s Stuart Green, had “made it through the bollards, [and] past the lights and gates” that were installed precisely to prevent this issue from occurring.

An image shared by Green shows what the scene of the incident looked like — with a block of concrete wedged between the vehicle’s wheels.

And here’s what an SUV stuck on the Union Station streetcar platform looks like. The concrete block is a walkway to the operator toilet. pic.twitter.com/7CQOt5oRpW

The driver reportedly remained at scene, and shuttle buses ran while crews dealt with the removal of the vehicle. By 6 am, service on the 509 Harbourfront and 510 Spadina had been restored.

And we’re clear. Service on 509 Harbourfront and 510 Spadina back to normal.

Toronto City Councillor Joe Cressy asked Green if it might be time to build a moat around the tunnel, as this isn’t the first time the TTC has dealt with this issue.

Green said, “Only if Monty Python provides the guards!”

Only if Monty Python provides the guards! pic.twitter.com/F9v2QJY9zS