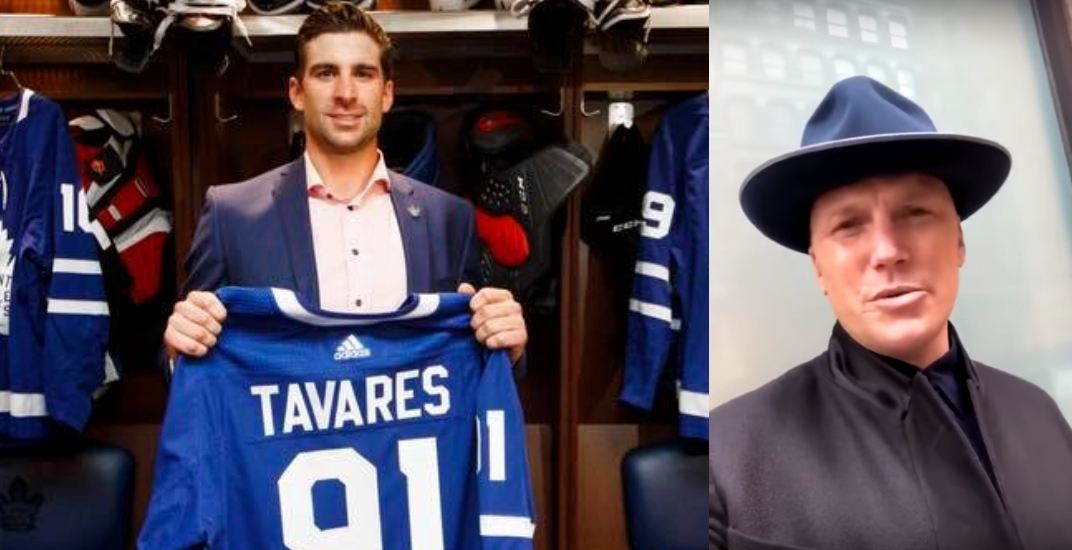 A day after John Tavares was ripped to shreds by New York Islanders fans in his return to Long Island, Avery had some strong opinions on the subject.

Islanders fans came prepared to make things uncomfortable for Tavares in his first game back, arriving with signs, props, and creative chants. They booed him mercilessly all night, including during his tribute video, and threw snakes and a jersey at him during warmup.

Avery, who is no stranger to being enemy No. 1 on Long Island, wasn’t impressed.

The controversial ex-player, who appeared in 580 NHL regular season games for the Detroit Red Wings, Los Angeles Kings, New York Rangers, and Dallas Stars went on an expletive-filled rant in defence of Tavares, calling out Islanders fans on Instagram.

“[Tavares] played 10 years in that f*cking dump, with those sh*tty fans,” Avery said. “He didn’t say a word, was a great captain, never got arrested. Didn’t say f*cking boo. You losers want to ruin his night coming back to play for you guys? What was he supposed to do?”

“You f*cking greasy Islander f*cks. You guys get out-cheered in your own barn by Rangers fans every time the Rangers play the Islanders in Long Island.”

Toronto Mayor John Tory also leant his support to Tavares, albeit in a much less aggressive way.

Don't let the haters get you down @91Tavares, you’re home now and we're proud you're here in Toronto! #TavaresDayTO pic.twitter.com/m4rKVkxSi6

Leafs Nation has been showing the love for Tavares on social media today, using the hashtag #TavaresDayTO.

Can we get #TavaresDayTO trending today? And keep it going tomorrow?

Can we make tomorrow “John Tavares Day” in Toronto?

Can we get @JohnTory to sign an official proclaimation making tomorrow “John Tavares Day” in Toronto?

RT if you agree. Let’s show Johnny why he came home

The Legend of Oakville needs some love. Let's give him the love and appreciation that Johnny Tavares deserves. #TavaresDayTO pic.twitter.com/OmqeAA7IPv

John Tavares once stopped and talked to me after one of his games when he was a London Knight and gave me 2 autographed jerseys, let me wear his medal from the world juniors and gave me a new favourite player, #TavaresDayTO @AdamWylde @JeffVeillette pic.twitter.com/nuU01ZIqui

No matter how happy John Tavares was to sign in Toronto, there's no denying that last night was probably an emotional rollercoaster for JT.
John's childhood dream was our dream come true as well. Let's remind JT why he chose to come home. Make tomorrow #TavaresDayTO in Toronto!

Looking forward to #TavaresDayTO tomorrow when he lights up the Sabres and realizes the decision he made to come live out his childhood dream after dragging a shit franchise on his back for the last 9 years is the best decision he’s ever made.

WE DO NEED YOU! #TavaresDayTO

@AdamWylde I was working on some signs for the game tomorrow. I think I'll go with this now. #TavaresDayTO pic.twitter.com/S1DcnSQcI1