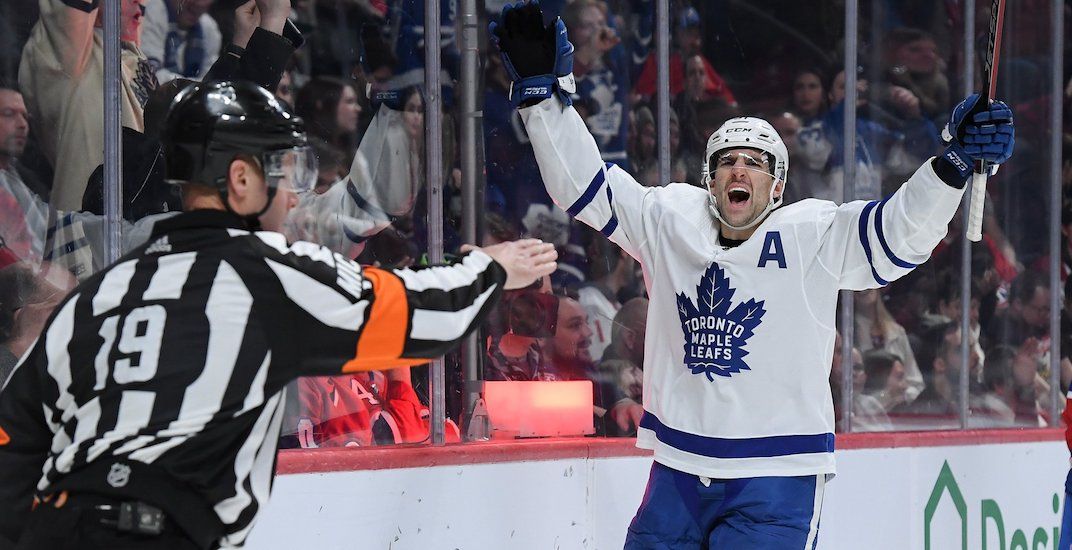 On Thursday night, Toronto Maple Leafs superstar forward John Tavares returns to Long Island to play against the New York Islanders, a statement that even as little as a year ago many thought seemed impossible.

And though the Islanders announced he will be getting a tribute video, he’s also going to get booed. Loudly.

A video titled “Dear John” was released this week by a local news station of various Islanders supporters voicing their displeasure to his departure.

“It’s not that he left, it’s how he left,” seems to be a common sentiment among the Islanders fanbase. The Leafs were one of six teams (including New York) that Tavares ended up speaking to in free agency, which kills the notion that it was always part of some scheme he’d cooked up years in advance.

For Tavares, it’s not hard to see why he ended up doing moving to Toronto. Having made the second round of the playoffs just once in his career,  the lack of playoff success had to be getting to him. And while Toronto’s yet to do that since 2004, they should be set up well to compete during all seven years of Tavares’ contract. It’s hard to say the Islanders management group was set up to do the same.

New York missed the playoffs last year in a season that saw them register just 80 points, and didn’t deal Tavares at last year’s trade deadline, instead opting to try to negotiate a contract with him.

So far, the Islanders have done alright for themselves without Tavares.  A look at the standings places the Islanders just a single point behind the Leafs heading into Wednesday, as they have been one of the NHL’s biggest surprises this season. To put it lightly, there’s going to be quite a bit of tension between Tavares and the local fanbase when he does step out onto the ice.

But Tavares’ entire career, general manager Garth Snow was routinely ridiculed as one of the league’s worst at his job.

For years, Tavares was seen as the Islanders’ talisman, who often heavily inflated the stats of his linemates. PA Parenteau, Matt Moulson, Frans Nielsen, and Kyle Okposo are just a few examples of teammates who earned contracts elsewhere, only to see their production taper off once they found themselves alongside lesser quality teammates than Tavares.

The team’s next three first round picks in the years following Tavares being drafted: Nino Niederreiter, Ryan Strome, and Griffin Reinhart were all eventually traded away. Tavares never really had the 1-2 punch in New York with anyone like he’s been able to form with Auston Matthews, with linemate Mitch Marner also leading the team in scoring with 71 points.

The Leafs offered Tavares an offence complementary to a superstar of his calibre, and need just 43 goals over their final 20 games to put up a higher goals for total as a team than any of Tavares’ Islanders teams accomplished. They’re also currently on pace for 105 points this season, which is four higher than Tavares and the Islanders ever achieved in New York.

There was quite the interesting shift this offseason, as the Islanders picked up 2018 Stanley Cup champion head coach Barry Trotz, as well as plucking GM Lou Lamoriello from Toronto after the Leafs appointed Kyle Dubas to run their management team.

But there’s also off-ice issues with the Islanders that likely became too much to handle with the lack of team success for Tavares to decide it was in his best interests to be sticking around. New York is the only team in the NHL to have two home arenas, with uncertainty of where they’ll end up long term.

A look at any social media post from Tavares himself will ring up sentiments of disgust and pure hatred. He’s earned the nicknames “snake”, and “pyjama boy”, from his infamous tweet below after signing with Toronto (they’re Leafs bedsheets and not pyjamas, by the way).

Not everyday you can live a childhood dream pic.twitter.com/YUTKdfMALl

It’s hard to pinpoint exactly why or how Tavares came to the decision to leave, but heading into Thursday night, everyone has their reasons to express their emotions, and it’s alright to boo and yell and get mad about it.

From one angle, the ire of many Islanders fans is understandable: the team’s leader and captain willingly chose to move on from a team he didn’t see his future with.

From another perspective, it’s sports, and a competitive athlete made a decision to better his career. For many Islanders fans, Thursday night will be a chance to get months of frustration out. But it’s odd that so much of the anger seems to be at the player’s choice, instead of the management’s inability to keep him around.

We don’t know how things will play out moving forward in this game and onward, but one thing is clear: there’s no going back now.

After all, Tavares said earlier this month he has “no regrets” about leaving the Islanders. You have to wonder if the Islanders’ management group feels the same about letting him go for free.