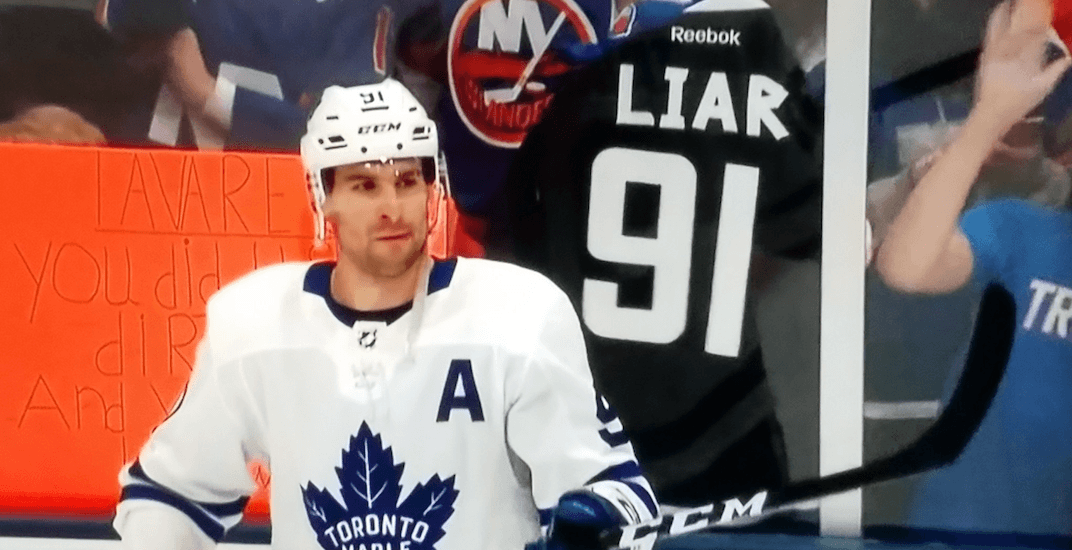 John Tavares made his anticipated return to Nassau Coliseum to face his former team, the New York Islanders, for the first time since signing with the Toronto Maple Leafs in the offseason.

When the signing was announced back in July, it wasn’t a matter of if Islanders fans were going to boo Tavares, but by how much they were going to do it.

On Wednesday fans across the league got a taste of what was to come with the cringe-worthy “Dear John” video that went viral.

But that was just the beginning of what was to come.

Some fans clearly are still upset with Tavares. #Isles pic.twitter.com/JpLiWctBR0

Before the puck dropped, fans began showing how much they’re over Tavares leaving by running over his jersey with their cars and trucks.

This John Tavares jersey was duct taped to the Coliseum parking lot floor for cars to run over. #NHL #Isles #Islanders pic.twitter.com/1Z6cwplNo5

Then they decided to kick things up a notch by burning jerseys and t-shirts that bared his name.

As the game got closer, some fans had a more creative approach in showing how much they were sick and tired of Tavares, like customizing their jerseys.

’TRAITOR’ all over the arena will definitely make Tavares feel worse about his decision, I’m sure. pic.twitter.com/dQPoxte9jK

Then to really show everyone how much they didn’t care for him, one fan decided to take a bold approach by trying to throw a jersey at Tavares as he was leaving the warm up.

Jersey thrown at John Tavares while he was heading down the tunnel after warm up pic.twitter.com/JvMsT1XuZI

Next, some Islanders fans threw rubber snakes on the ice, because Tavares “snaked” the Islanders by invoking his right to leave as a free agent.

John Tavares gets plastic snakes thrown at him in his return to New York pic.twitter.com/HKKHVskZ79

Here’s the Tavares snakes… imagine more things will be thrown during play. pic.twitter.com/J8loPMcv9M

The fans kept the same energy throughout the game as the boos rang loud in the Coliseum every time Tavares stepped on the ice, including when the Islanders played a tribute video for their former captain.

This atmosphere is insane #LeafsForever pic.twitter.com/btEFPQRrfX

Fans chanted phrases like “we don’t need you!” and “Barzy’s better!” referring to Matthew Barzal..

The atmosphere felt like it was a Game 7 in the playoffs.

“It’s your bedtime” and “where’s your jammies?” chants. Islanders fans are savage #Tavares

While Tavares was on the ice when the Leafs scored the first goal of the game, it wasn’t enough as the Islanders would win 6-1.