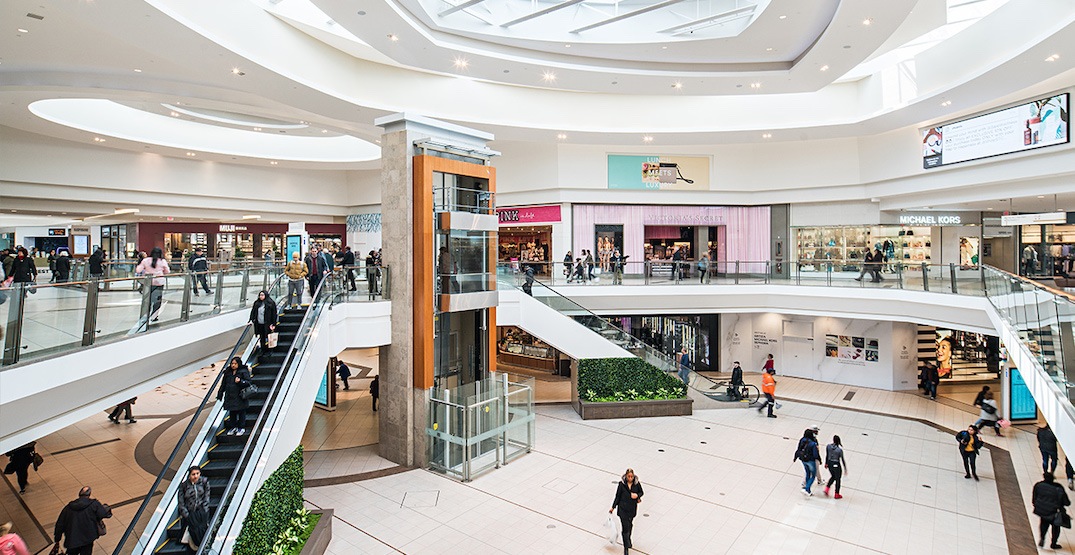 If these master plans are realized, Scarborough Town Centre could be a model example in North America of how to turn a traditional suburban shopping mall into a dense, mixed-use community.

A Site Plan Approval (SPA) concept plan for the shopping mall, attached to an application to construct a new standalone building for Cineplex across from the former Sears building, envisions a significant redevelopment of the vacant ground-level parking lots on the perimeter of the property and other underutilized sites.

There will be about 40 towers, with about two dozen buildings ranging between heights of 40 storeys and 65 storeys. Podiums of between one storey and six storeys are located at the bases of many of the towers to help activate a street presence. 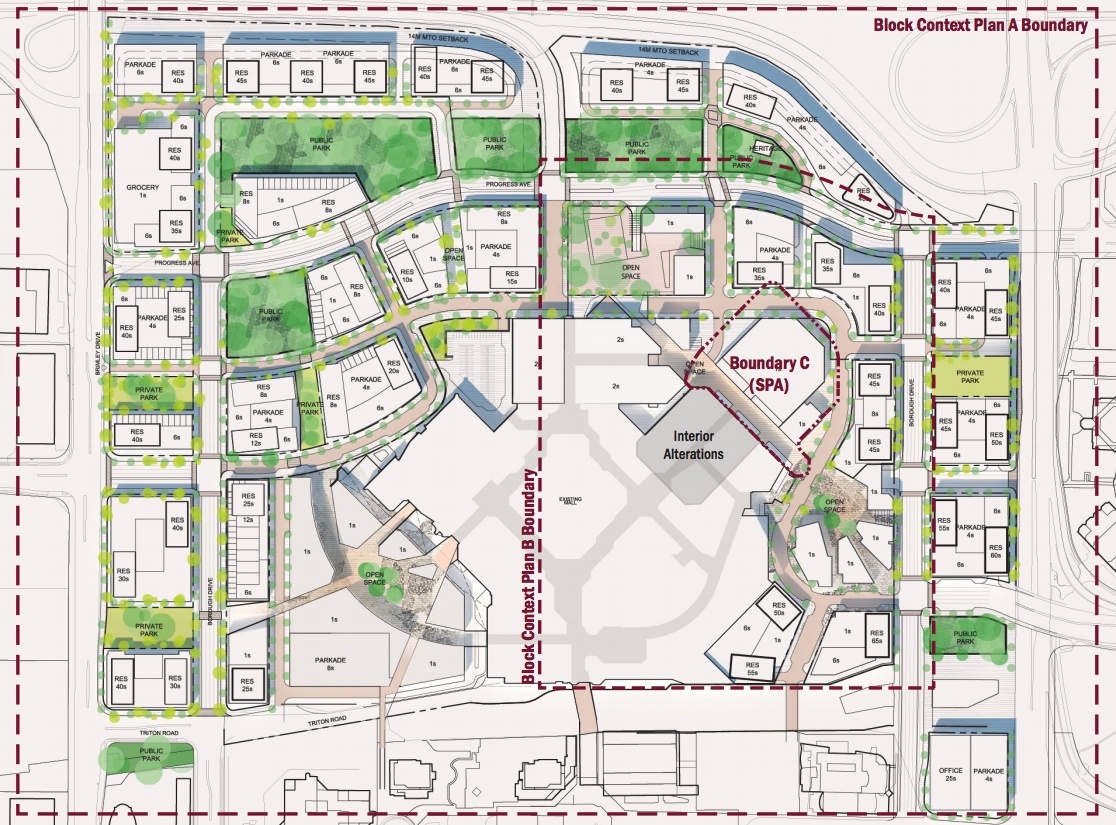 Potential master plan for the Scarborough Town Centre redevelopment. Click on the image for an enlarged version. (Oxford Properties)

The greatest heights and densities are located on the eastern half of the property, near the future Scarborough Centre subway station, and along the northern perimeter close to the property’s frontage with Highway 401. The towers and relatively tall parkade podiums, ranging between four and six storeys in height, could potentially act as a noise buffer for the highway.

Thousands of existing ground-level vehicle parking stalls will be relocated into a number of new multi-storey parkades scattered across the site that serve both the retail functions and new residences of the redevelopment.

A major grocery store — possibly a replacement of the Superstore — is located at the northeast corner, and the redevelopment only has a single tower dedicated for office uses at the southeast corner. 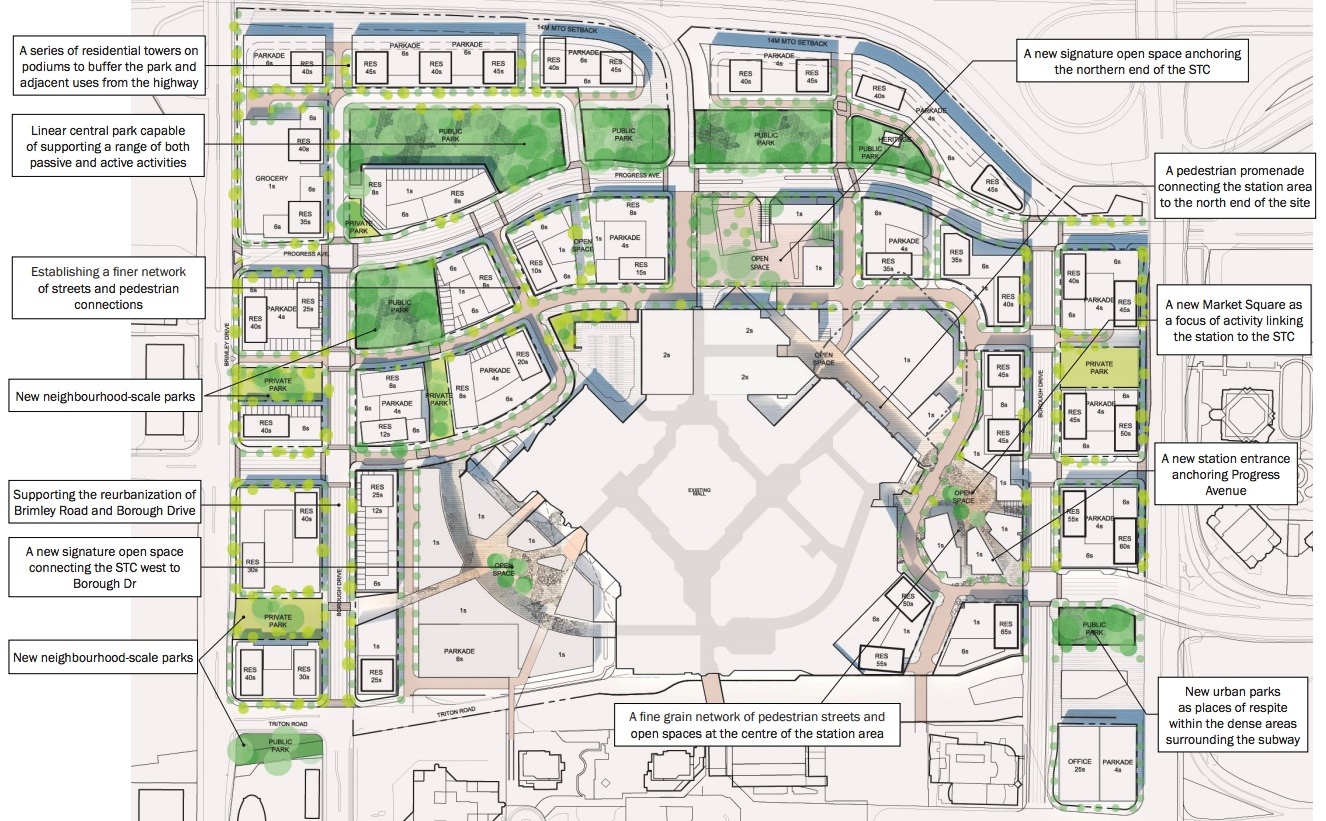 Potential master plan for the Scarborough Town Centre redevelopment. Click on the image for an enlarged version. (Oxford Properties)

Ample green spaces are planned, particularly five large parcels within the northern half of the site that are designated as a ‘linear central public park,’ plus a handful of smaller residential amenity private parks and three large public open plaza spaces that could be suitable for community events and activities.

A new street network focuses on establishing a pedestrian-friendly environment, including what appears to be new street front retail opportunities.

Few major changes are planned for the existing indoor shopping centre, apart from what is currently envisioned — the conversion of the former Sears building into a multi-retail unit indoor mall expansion, and the new replacement cinema building.

A redevelopment of the shopping centre, coupled with the new subway station, could become a major catalyst for further redevelopments in the area.

The master plan was drafted by a consortium of design firms, including Urban Strategies, Quadrangle, Abbarch, and CallisonRTKL.